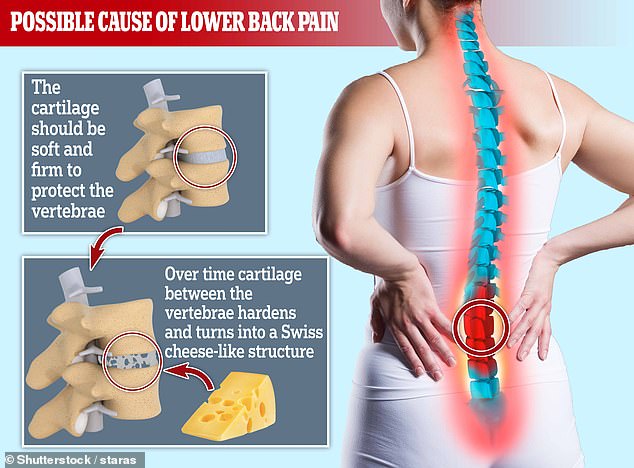 Low back pain is an agonizing problem that affects millions of people worldwide.

Now, scientists believe that debilitating pain can be caused by cartilage in the spine that turns into bone that looks like Swiss cheese.

The cartilage should be smooth and firm, protecting the vertebrae, the 33 pieces of bone that make up the spine.

But tests on mice showed that their tissue became a hardened structure with holes as rodents aged.

Porous spaces allow pain-sensitive nerves to grow and spread deeply in the bones of the spine, which in turn causes agony.

A study in old mice found that the cartilage between the vertebrae, the 33 pieces of bone that make up the spine (pictured on the right), became a hardened structure with holes

Rodent cartilage resembled a Swiss cheese (pictured) that caused abnormal nerve growth. This may be the cause of low back pain.

It is estimated that 80 percent of people worldwide will experience low back pain in their lives, sometimes due to tension or injury, such as a slipped disc.

But the vast majority of back pain arises without an injury, especially in old age when it has worn out.

The researchers experimented with genetically modified mice to be at least 20 months old, the equivalent of 70-80 in humans.

They observed the layers of cartilage between each vertebra, called end plates, which cushion the bones and protect them from body weight.

Dr. Xu Cao, principal investigator, said: ‘The cartilage end plate is the cushion in a seat that makes it more comfortable.

“But, like a similar tissue in the knee and hip joints, it succumbs over time.”

He added: “When the cartilage becomes a porous bone structure with nerve fiber growth, it could be the source of back pain.”

The researchers found that the soft tissue in the spines of the mice hardened and resembled a diffuse bone. It had a Swiss cheese structure.

Dr. Cao and his team suspected that the holey structure would provide fertile ground for abnormal nerve growth. 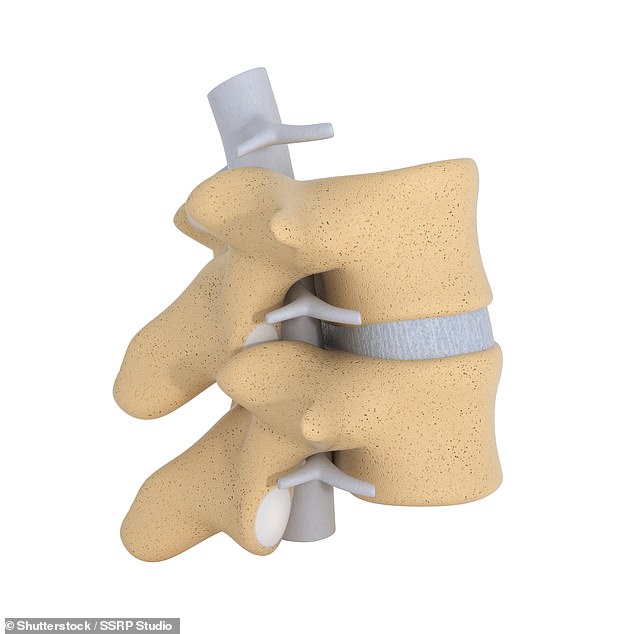 The cartilage should be smooth and firm, protecting the vertebrae, the 33 pieces of bone that make up the spine. He sits between each vertebra (pictured) 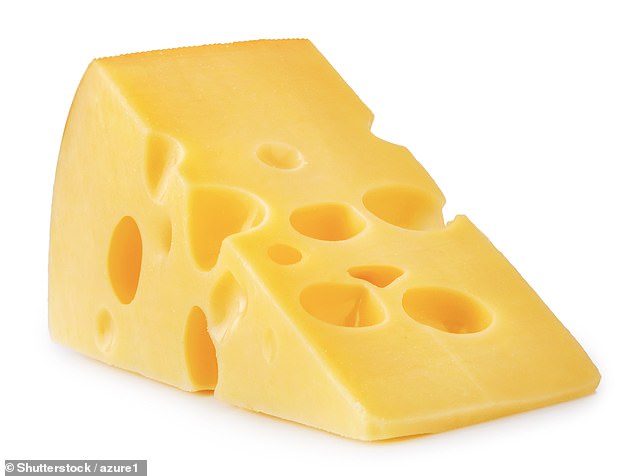 The researchers found that the soft tissue in the spines of the mice hardened and resembled a diffuse bone. It had a structure like Swiss cheese (pictured)

The researchers suggested that this extension of pain-sensitive nerves deep in the bones of the spine could be the cause of agony.

The team has previously shown that a cell type, called osteoclasts, creates the porous bone structure where the cartilage should be.

Osteoclasts are specialized cells that remove old bone and replace it with new bone. But in old age, it is believed that the process is unbalanced and causes conditions such as osteoporosis.

DOES THE EXERCISE HELP RETURN THE PAIN?

Being highly active reduces the risk of chronic low back pain by 16%, research in July 2017 suggested.

Regular moderate activity reduces the risk of such discomfort by 14 percent, according to a study review.

However, exercise has no impact on short-term back pain or that causes hospitalization or disability, the research adds.

Dr. Joel Press, chief physiatrist at the Special Surgery Hospital in New York, who was not involved in the study, said: ‘We were destined to move. We weren’t meant to be stuck in any way.

‘Swimming is another low impact activity that puts less load on your back.’

Dr. Press advises those who suffer from back pain to avoid sports that involve many twists and turns, such as golf and tennis.

The researchers, from the Finnish Institute of Occupational Health in Helsinki, analyzed data from 36 studies that included a total of 158,475 people.

Study participants had no back pain at the beginning of the investigations.

Physical activity was defined as sport and intentional exercise, as well as walking and climbing stairs.

Participants were considered active if they did physical activity at least twice a week for a minimum of 60 minutes.

The team wanted to explore the idea that osteoclasts can also invite nerve cells to grow analyzing tissue samples from the spines of old mice under the microscope.

They labeled all hole-building osteoclasts, as well as nerve fibers with fluorescent tags, according to findings published in Nature Communications.

Osteoclasts and nerve fibers generally arise in the same areas, suggesting that the cells could trigger abnormal nerve growth.

Dr. Cao and his colleagues believed that it could be a signaling molecule, netrin-1, secreted by osteoclasts, the root of the problem.

The team investigated whether inhibiting osteoclast formation would prevent the entire process.

Separate tests also showed that they had less pain-sensitive nerves in their endplates, compared to mice with the gene.

Dr. Cao said the findings are an important step forward in understanding how unexplained low back pain develops.

Then, his team plans to perform laboratory experiments with compounds that decrease abnormal bone growth to assess their potential to treat low back pain.

Some people suffering from back pain may never be given a reason why their condition worsens because the cause cannot always be identified.

Pain relievers, hot or cold packs, swimming and physiotherapy are the standard tips of the NHS.

According to the World Health Organization, low back pain is the leading cause of work absence in much of the world.

More than 100 million work days are lost in the United Kingdom per year because employees have too much pain to work and 150 million in the United States.

With an increase in drug resistance and a decrease in antibiotic discovery, AI could be the answer

Coronavirus: England only has 15 beds for the worst respiratory cases | Society

Will the Democrats break the script for the December Democratic debate?

What to expect from the DLC Version 7.0 patch

This tired fan slept hilariously during the 2020 Super Bowl

After the delays, the noise-adaptable NuraLoop headphones will arrive soon and...

The coronavirus epidemic ‘has PICO in China’ says the World Health...