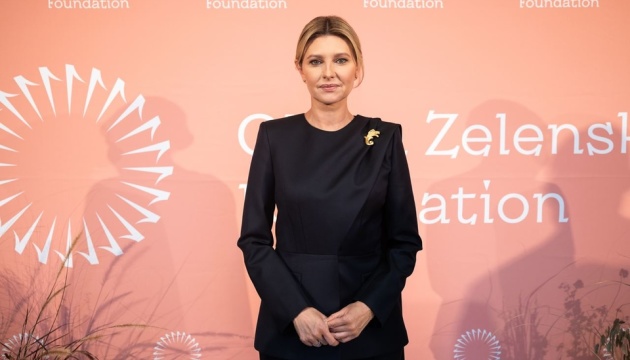 In New York, the First Lady, Olena Zelenska, presented her charitable foundation and invited world leaders to join the restoration of Ukraine.

According to Ukrinform, she announced this on Telegram.

“Important day. I hope not only for me, but also for Ukraine. Introduced her foundation to the world. In fact, everything that I have been doing since the beginning of the full-scale invasion, helping our people to survive in the new conditions, has been officially embodied,” Zelenskaya wrote.

She recalled how since the beginning of the full-scale invasion, when the Russians bombed hospitals, children with cancer were taken to safe countries. “Our adults and children have lost and are losing limbs – we find the best prosthetics for them abroad. Our women, due to constant stress, began to give birth prematurely – and we are importing special incubators with uninterrupted power supply to save premature babies,” Zelenskaya said.

According to the first lady, the war adds new quests every day, therefore, in order to respond to them as quickly and efficiently as possible, a whole rescue headquarters is needed, which will become her foundation.

The President’s wife expressed confidence that the country’s restoration begins with people. In her opinion, if people’s lives are improved, their strength is restored, the whole country will improve and recover.

The fund has three directions: humanitarian aid, high-quality and affordable medicine and education.

Zelenska explained that anyone in need of support could apply for humanitarian assistance and receive it.

The foundation will also deal with medicine so that Ukrainians return physical and mental health.

Another component of the foundation’s activities will be education, so that, despite the war and destruction, Ukrainian youth receive the best education, grow and develop.

“Our task is to help life win. And that requires hospitals, schools, jobs and opportunities. Therefore, today in New York, where political and business leaders of the world gathered at the 77th session of the UN General Assembly and where the presentation of my foundation took place, I invited world leaders to join the restoration of Ukraine,” Zelenska said.

According to her, the destruction and chaos that the Russian invaders bring must be countered by restoration, by putting into practice common values, where a person and his life are most important. “By protecting them, Ukraine right now is making the world a better, safer, fairer place. Helping Ukraine recover means helping the entire free world,” Zelenskaya stressed.

You can join the fund and find out more information about it on the website.

As Ukrinform reported, during her visit to New York on the occasion of the 77th session of the UN General Assembly, the wife of the President of Ukraine met with Secretary General of the United Nations António Guterres, British Prime Minister Liz Truss, First Lady of France Brigitte Macron and Executive Director of the UN Foundation in the Population Industry (UNFPA) by Natalia Kanem.