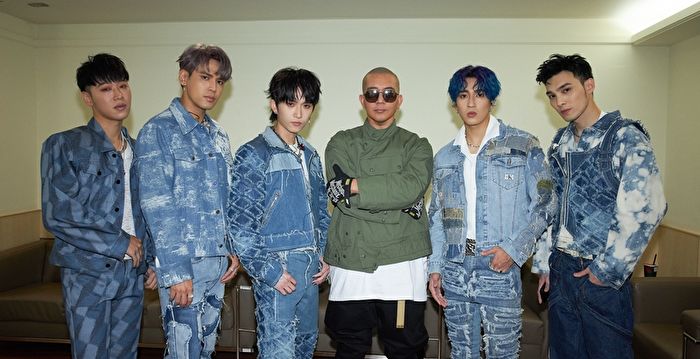 [Epoch Times, August 7, 2022](Reported by Epoch Times reporter Ma Weifen) Taiwanese men’s group “Wu Jianqing” will stage its first Taipei Arena concert on August 6, and Wu Jianqing will bring 18 more dancers this time. The splendid stage spent tens of millions of Taiwan dollars and dispatched more than 500 manpower. And in the concert, there is even more heavyweight guest DJ KOO Ku Junye platform, bringing the atmosphere to the highest point.

At that time, Qiu Fengze shouted: “The concert is about to start now, ready to release hormones!” The other members corrected: “It’s adrenaline!” Then he brought a super-hi line dance to sing “Miao Miao Miao”, and then the mystery was revealed Guest DJ KOO “National Brother-in-law” Gu Junye made a surprise appearance, causing the audience to exclaim.

It was the first time for Ku Junye to stand on the stage of Taipei Arena, and also the first time to dance the “Cool Dragon” dance after marriage. The atmosphere was hot to the highest point, and the scene scene was even more cued to Xu Huaiyu, the original singer of the Chinese version of “Miao Miao Miao”, who was also watching the concert on the spot.

Gu Junye taught the Korean language of “Nuts, we are Wu Jianqing” on the spot. The members also asked “O’s father”, Chen Lingjiu: “How does Ouba perform at the Little Arena?” Gu Junye : “I’m very happy!” Lou Junshuo asked: “As my brother-in-law has seen so many artists and groups, how long do you think Wu Jianqing can be popular?” Gu Junye said, “Forever, forever.”

See also  No one has paid for the BTS concert in Busan. The company HYBE issued a statement | BTS | Epoch Times

Xiao Lai asked: “Dad Ou is very happy. Two of us in the group also want to get married, and I want Papa Ou to give some advice.” Gu Junye said emotionally: “We should get married when my heart is the hottest and I love her the most. But , even if you don’t get married now, you can meet the fate of fate like Dad Ou.”

Later, Qiu Fengze asked Gu Junye who he thought Wu Jianqing was the most handsome, Ou Dad Miao replied that it was Lou Junshuo, and when asked who was the most beautiful, he called Xiao Lai. In the end, Qiu Fengze asked again, “Does Dad Ou have anything to say to the fans?” Gu Junye said, “It’s nice to meet everyone, and it’s nice to meet Wu Jianqing.”

In the part of the series of emotional films, talking about the state of mind of being on the Taipei Arena for the first time, Lou Junshuo mentioned his childhood dream and said, “I think I should be more moved, because after all, when I was a child, making a wish on the sky lantern was just saying what I wanted to say. To attack the Little Dome, and now it’s the real ‘Little Dome’.”

Lou Junshuo also thanked the fans very much: “With everyone’s company and support along the way, we can really accomplish this. We originally wanted to say that the dream that may not be realized. Today it really came true.”

And Xiao Lai revealed that he had a lot of problems with his body during this period, for example, he has low back pain now, suspected of contracting an inexplicable strange disease, and “has been coughing all the time.” In addition, he recently injured his waist, and now “he can’t even squat.” squat”, but he also assured fans that he would go all out to face the stage.

The head of the group, Qiu Fengze, said more frankly that following the last time he held in Kaohsiung, he could feel the feedback from the fans. He felt much less fear and worry this time. He also admitted that the members also relaxed a lot. A very unforgettable night for you all.