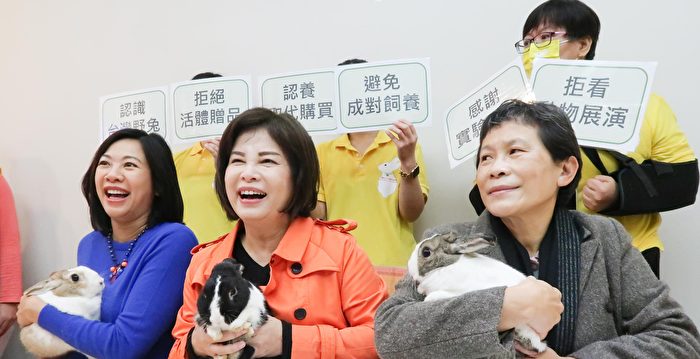 [The Epoch Times, January 09, 2023](Reported by Epoch Times reporter Chang Huairen, Taipei, Taiwan) The Year of the Rabbit in the Yellow Calendar is approaching, and cross-party legislators Chen Jiaohua, Chen Tingfei, Lai Huiyuan, Hong Mengkai, and Wu Xinying collaborate with the Taiwan Love Rabbit Association On the 9th, the Taiwan Animal Protection Administrative Supervision Alliance held a press conference on “The Year of the Rabbit is here, refuse live gifts and stop animal magic”, and put forward ten appeals to prevent the Year of the Rabbit from becoming a “Rabbit Disaster Year”.

Lin Hao, head of the evaluation team of the Taiwan Love Hematemesis Association, put forward 10 appeals, don’t raise impulsively, adopt instead of buying, avoid breeding in pairs, refuse live gifts, refuse to watch animal performances, don’t use live props, stop animal magic, get to know Taiwan hares, Thanks for experimenting with white rabbits and helping the Taiwan Love Rabbit Association. In addition, the movement group called for the early announcement of the rabbit breeding guide, the progress of the follow-up amendments on the issue of live game gifts, the issuance of a document to remind TV stations without performance licenses not to record animal performances, and the early development of pet rabbit microchip registration and sterilization subsidy programs.

Chen Jiaohua said that many industry operators have not applied for permission for animal performances, and called on the government to strictly implement it, and the Council of Agriculture should actively establish a system for laboratory animal veterinarians. Lai Hui mentioned that in some night markets in the south, rabbits are used as gifts, but this often leads to tragic breeding methods, such as: throwing aside, one meal and one meal, so I hope that the Council of Agriculture will amend the law in the future to prohibit live gifts. There should be a set of patterns to follow. Wu Xinying appealed, don’t raise them impulsively, don’t make quick decisions, this is a lifetime responsibility.

“Using a living body as a gift, he doesn’t know how to love”, Chen Tingfei emphasized, because it was given as a gift, so she must practice the law as soon as possible. Hong Mengkai pointed out that everyone should not raise animals impulsively. It is irresponsible if you are not prepared. He also used this budget negotiation to propose a main resolution, asking the Council of Agriculture to launch a publicity campaign on the issue of abandonment caused by impulsive purchases. , and submitted a report, and the Council of Agriculture followed suit.