FOR THE PANDEMIC. Many students decided to stay at home because of the virtuality of the classes. (Photo File / M. Colman).

Among the effects of the health emergency on students of the National University of Misiones, the authorities noted that there was a decrease in the order of the shelters during this year. In addition, fewer new entrants were registered in some faculties, compared to previous years.

In dialogue with FIRST EDITION the assistant secretary for Student Affairs of the UNaM, Alexis Janssen, explained that “This year the number of shelters requested was lower than in previous years. This is because the students already knew that the classes were continuing virtually, so they decided to stay in their places. Before the pandemic, last year we had 130 registered to access the shelters, of which we gave 70 places. This year there were 17 applications and 15 places were granted, of which about 10 were requested by new kids and others were already university students ”.

He also clarified that “to continue with the shelter scholarship, they must meet concert requirements, but the particularity of this year was considered. In academic matters, we knew the situation of the students because there was a contact to see the progress in this context of pandemic ”.

Previously, “they had to have at least 50% of the approved subjects of the year they were studying and regularized subjects. But In this context, we ask for two subjects approved at the end of the year and for February, so we analyze how to move forward ”.

Janssen indicated that it is an evaluation process where “the situation of each boy is also taken into account, because they come from different families, with their particularities. It is not just a question of whether you pass or not, but they are different factors that influence whether they can keep the scholarship or not. It is a social analysis with social workers, anthropologists and psychopedagogues, to raise an accurate report because the last thing we are looking for is to leave a student without his shelter scholarship “.

To study at UNaM, “this year with the pandemic everything was different, but previously they came from places in the province as colonies without connection, who had to walk kilometers to go to school, cross streams. This context is taken into account to include the boy in the student environment”, He added.

During the winter break, “some students stayed in the shelters, around 60. This too It happens because some students work and others decide to stay to study and perform at these tables, as it is difficult to study in their homes with large families. In this recess, we are going to take food modules because in these weeks there is no UNaM dining room “Janssen assured.

The deputy academic secretary He specified that “we have 400 scholarship holders at the Campus and we estimate that in the entire National University of Misiones there are around a thousand students housed in different parts of the province: Posadas, Apostles, Oberá, Eldorado, San Vicente, San Pedro ”.

Among the particularities of this pandemic year, Alexis Janssen said that “In some faculties the number of incoming students decreased a little and in others there were more, as new careers were added. During the pandemic there were quite a few graduates, because it is seen that they took advantage of virtuality to study and perform at the tables. Last year, we noticed that there were students who resumed their careers ”.

See also  despite the increase in students, a class in danger at the Simoust school 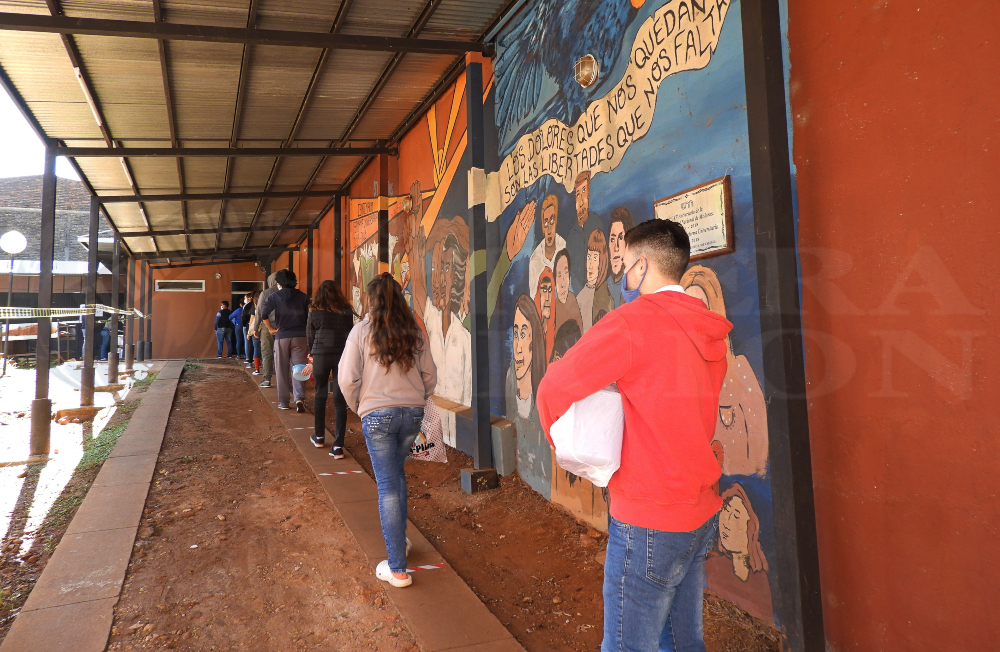 BY PROTOCOL. The system in the college cafeteria will continue with the recall of groceries, Janssen said.

Regarding how the attention will continue in the dining rooms of the UNaM, Janssen explained that “by protocol, it will continue with the food system and the students got used to it.”

Regarding the number of students who attendHe explained that “at the beginning, last year, there were about 250, but this year we already started with 300 and in the last few days there was an average of 350 students and a maximum of 450 was reached in the Néstor Kirchner dining room in Posadas. Around 200 students attend the Economics Dining Room on Campus, in the Oberá regional there are around 450 who go and in Eldorado there are around 100 ”.

Other scholarships for students

Among the resources to be able to pursue a university career, at the beginning of this month The agreement for the Pathways of Inclusion scholarships was renewed, which enable students from various UNaM careers who reside in one of the EBY relocated neighborhoods to continue their studies through an economic incentive. The program began in 2019 and in a first stage it awarded 10 scholarships to young students whose selection was in charge of technical teams from UNaM and the entity. In this new stage, the number of beneficiaries doubles to 20.

As part of the National University of Misiones, the young students benefiting from the scholarships are part of careers such as a Bachelor of Nursing, Public Accountant, Bachelor of Business Administration, Pharmacy, Bachelor of Genetics, teaching in Mathematics. The students come from neighborhoods such as San Isidro, Yacyretá, A4 and Fátima among others. In these places and as part of the pedagogical tools provided by public education, Young scholarship holders carry out community promotion actions in their neighborhoods, providing support classes for boys and girls at the primary level.

The renewal of this agreement took place with the presence of the vice-rector of the National University of Misiones (UNaM), Fernando Kramer, together with the deputy head of the Complementary Works department of the Yacyretá Binational Entity (EBY), Pablo Ciejovicz. The Secretary General for Science and Technology, Pedro Zapata and Student Affairs, Alexis Janssen, the head of the EBY social sector, Alicia Karasawa and Romina Zulpo, technical manager of the “Paths of Inclusion” agreement also accompanied the signature. “Through these joint actions we remain on the path of education, despite the times of pandemic that affect us all,” said the vice-rector of the UNaM, Fernando Kramer.