Two people from the Cultural Encouragement Award give a lecture.

The Okuwa Education and Culture Promotion Foundation (Chairman Hirotsugu Okuwa) is a pianist from Wakayama City, Masafumi Nakatani (38), who was selected for the 2021 Okuwa Culture Encouragement Award. An award ceremony for Mr. (62) and a ceremony to present a list of assistance for cultural, educational, and sports activities were held at Hotel Avalorm Kinokuni in Wakayama City.

The foundation was established in 1993 by Isamu Okuwa, the founder of Okuwa Co., Ltd. Starting with the incentive award given to people related to the prefecture who are engaged in excellent activities in the fields of culture and art, every year, support for improving competitiveness and scholarships for athletes in the prefecture, support for junior relay races against municipalities, books for schools We continue to support activities related to culture, education, and sports, such as donations.

At the ceremony, President Okuwa introduced the activities of the foundation rooted in the community, such as the total amount of scholarships provided since the foundation was founded, reaching about 590 million yen. I would like to continue activities that can contribute to the local community while listening to. ” In honor of the efforts of the winners and recipients of this year, we handed out a certificate and a list.

The two members of the Cultural Encouragement Award gave a lecture to commemorate the award.

Mr. Nakatani said that he had met a wonderful master at a turning point in his life as to why he had been playing the piano so far. I thanked him.

In the world of music, I sometimes focus on my own shortcomings and give up on my talent, but Mr. Nakatani himself has a personality that he hates to lose, so even if he can’t do it now, he will be able to do it someday. Introducing what has progressed continuously.

He said that he would like to convey his patience as well as his aesthetic sense to the younger generation who are instructing him, and he also performed a commemorative performance.

Mr. Ikenoue explained the difference between Negoro-nuri, which was about 600 years ago when he revived his technique, and lacquer ware, which is generally known today, by showing images and actual lacquer ware.

If a general lacquer ware is chipped or scratched during use, water will permeate from that part and the coating will peel off, making the underlying wood visible, and in many cases it will not withstand long-term use. On the other hand, Negoro-nuri has a strong structure in which lacquer is applied over the wood, so it does not peel off even if it is used, and a black coating appears from under the vermilion coating on the surface, increasing the depth of taste.

Mr. Ikenoue said, “The wounded figure is the root coating. The more you use it, the better it looks.” 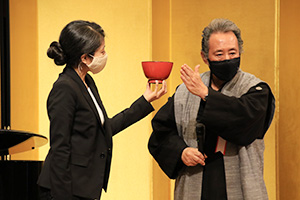