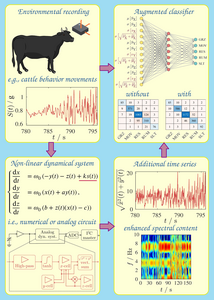 Engineers at the Tokyo Institute of Technology (Tokyo Tech) have demonstrated a simple computational approach to support the classification performance of neural networks operating on sensor time series. In the proposed method, we feed the recorded signal as an external forcing into the underlying nonlinear dynamical system and provide the time response to this disturbance along with the original data to the neural network.

The world around us is rife with sensors that promise to support the efficiency and sustainability of nearly every aspect of human activity. One of the challenges engineers delivering the Internet of Things to society must face is how to handle the flood of data generated by such sensors. In particular, the data should be reduced as much as possible at the edges close to the sensor itself. Because streaming all data to the cloud has an unacceptable technical, economic and environmental footprint. In response, there is a great deal of research worldwide towards small, highly efficient classifiers that are suitable for detecting specific actions and situations while running on limited computational resources. An example application scenario is real-time monitoring of livestock behavior, aimed at detecting subtle changes indicative of pre-disease.

“A new approach to support the development of time series classifiers suitable for edge artificial intelligence is data augmentation. Getting the best performance out of a neural network that necessarily needs to be very small to meet the requirements.The theory of classifiers is well established, but time series data augmentation is still in its infancy. For example, in our laboratory, we have worked on various methods based not only on mathematical principles but also on empirical considerations,” says a doctoral student at the Nanosensing Unit where the research was conducted. and co-leader Chao Li explains.study author [1,2].

Data augmentation is typically performed just before or during classifier training and is performed on a powerful workstation or cloud computer. As a result, the amount of data that can be used to train a classifier is extended along the time dimension, just as longer records become available. This is important because the type of high-quality data required to train a classifier is precious and expensive to prepare. However, this is not the only form of data augmentation possible. “I came up with the idea of ​​extending the data along the other dimension, the number of time series, the number of input dimensions. Typically edge applications work with one or at most a few sensor time series. One possibility is to perform computational operations to generate more information, which is a form suitable for efficient learning, making as much initial information available to the classifier as possible. Although many signal processing operations can be implemented, a particularly destructive computation is one that simulates a dynamic system, given its own specific activity, and transforms the recorded signals from the environment into Trying to interfere with it by coercing it from the outside,” explains Dr. Ludovico Minati. , the lead author of the study.

Starting with a previously developed and patented concept in the Bio-Interface Unit to improve the performance of brain-interface systems, the researchers carefully considered many practical aspects of how to achieve it. [3]They filtered and pre-processed the kinematic signals, with the goal of classifying basic behaviors of cows using collar-mounted accelerometers so that the simulated dynamic system I developed a way to inject them to accept and respond to them without diverging. We then considered how to extract the most relevant time series from that activity and fed it to a given feature extractor and multilayer perceptron, or convolutional neural network. “Many low-dimensional systems that have been studied by physicists and control engineers for decades, such as the Rössler and Lorenz systems, actually have amazing computational potential, but much of it remains unexplored. This research takes the unusual step of developing it into a concrete application scenario,” explains Professor Mattia Frasca of the University of Catania (Italy).Implementation as an analog circuit [4].

By augmenting the data with additional time series derived from the dynamic system, one separate Rössler system for each accelerometer axis, researchers were able to improve the classification performance considerably. “This is only the first study to propose a really provocative idea, and there is still considerable work to be done, but it is possible to realize dynamic systems using very simple analog hardware circuits and We were also able to observe improvements by leveraging responses,” he adds. Dr. Ludovico Minati. “Our approach is reminiscent of our recent work in reservoir computing, using basic transistor circuits known as Minati-Frasca oscillators. It’s actually different because it uses a single oscillator, and in this sense it may be even more suitable for low-power implementations. [5].

After the interview, the team explained that this type of exploratory study should be extended and developed with other datasets and settings to confirm its general applicability to concrete cases. “One of the key points is that this approach can be implemented digitally or analogically with very limited resources. A study showed a CMOS chaotic system operating at powers as low as 1 μW, which may be suitable for this application. [6]As process technology and traditional design optimization approaches their limits, the confident exploration of such radically new ideas seems necessary to continue innovation. The methodology, results and related considerations are reported in a recent article published in a prestigious journal. chaos, solitons, fractalsand all experimental recordings are made freely available for others to use in their future work. [7].

About Tokyo Institute of Technology

As Japan’s leading science and technology university, Tokyo Tech is at the forefront of research and higher education. Tokyo Tech researchers excel in a wide range of fields, from materials science to biology to computer science to physics. Founded in 1881, Tokyo Tech enrolls more than 10,000 undergraduate and graduate students each year who grow to become scientific leaders and the industry’s most sought-after engineers. The Tokyo Tech community embodies the Japanese philosophy of “manufacturing,” or “technical ingenuity and innovation,” and aims to contribute to society through high-impact research.