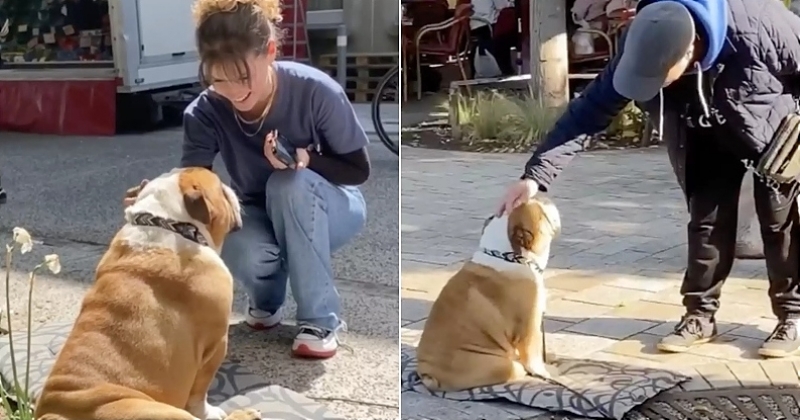 Taking your dog to work with you can be good for business, especially when he wants to shake hands with every potential client who comes by. At least that’s what Conny Steyaert learned after taking Nelson, his 8-year-old English bulldog, to work for just a few days.

Conny Steyaert, who works as a women’s clothing vendor at open-air markets and street festivals in Belgium, began taking Nelson with her to relieve stress when he was just a puppy. “He is a very sensitive dog” explained Conny Steyaert to our American colleagues from the specialized site The Dodo. And she adds: “He’s a sweet dog and very relaxed around the house, but he doesn’t like to be left alone. Besides, he’s happier outside. »

Instead of leaving him at home during the day, Connyd Steyaert decided to set up Nelson with her own blanket in front of her stand while she works. He could sit comfortably and enjoy his surroundings. It didn’t take long for Nelson to learn that patiently sitting in this spot caught the attention of shoppers passing by. “What touches me the most is when he raises his paw to greet people. He knows how to make them crack” said its owner.

And precisely, charm passers-by, Nelson does it daily, much more than Connyd Steyaert would have ever hoped. “I was surprised that Nelson was a good, loving and relaxed dog with people at work” said Connyd Steyaert, before adding: “but I was even more surprised by the behavior of people. I never thought pedestrians would pet a stranger’s dog so easily. »

The attention Nelson receives from strangers who walk past his mistress’s shop can range from a simple look to a big hug, and he really doesn’t seem to let go of all that love. “So many people were taking pictures of him and saying what a beautiful and kind dog he was and some were even bringing a treat for him” confided Connyd Steyaert, particularly moved by these gestures which speak volumes.

A dog that loves everyone

Although most of the people Nelson meets at work are strangers, the bulldog has still made some very good friends over the years. His mother, meanwhile, has gained notoriety within her community. “People often recognize me from Nelson” confided its owner.

Besides bringing smiles to customers and passers-by, Nelson has also been a source of healing for some people he met at work with his mother. “One day, a young girl who was passing by our stand stopped to ask me if she could pet Nelson” says Connyd Steyaert. But, when Steyaert agreed, the girl started crying. She said her bulldog recently passed away and seeing Nelson made her happy.