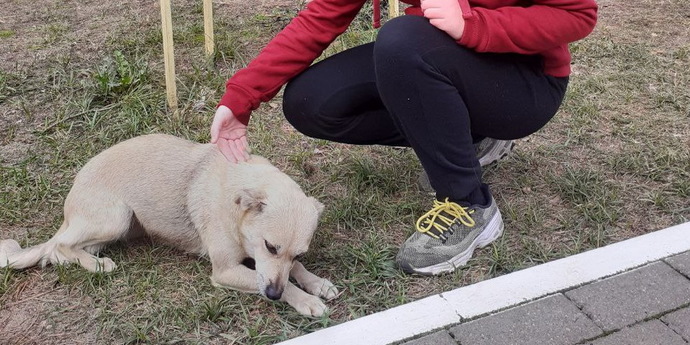 Our reader Ekaterina is now resting with her child in the sanatorium “Solnyshko” near Slutsk. He tells a terrible story about a local dog named Luchik – he was friends with children, of whom there are many now, but yesterday for some reason he was killed with two shots from a gun. Let’s try to understand what it was and what the administration has to do with it.

– This is such a small mongrel, up to the knee, says Ekaterina. — Very friendly, the kids loved her, and the adults too. It was called Luchik. They say it’s the third race here. No aggression was noticed behind her. We even thought about taking her to Minsk with us. I suppose she came running from somewhere because of the territory – we have such a fence there that an adult man will crawl through the holes. Or maybe it came from the other side, where there is no lake and no fence at all. In fact, it is dark there in the evening, and the parents were calmer when at least this Ray “guards”.

– We have breakfast at 8:20, the children wake up by this time, they are going outside. And at 7:48 we heard swearing and noise outside, as if some objects were being thrown. Then – a shot, and the dog squealed very loudly. We adults began to get dressed to run out and see what was happening. For about a minute the dog howled, and then a second shot rang out, and the howl began to subside. We have a second floor, when I ran out, I saw only a gray car driving away, the dog was gone.

According to Ekaterina, there was a second grader with his grandmother at the fence.

See also  Arnold and Jenry, the dog and the farmer are inseparable. But there is a sad ending

– He cried and told what he saw from the room: a man shot at a dog, immediately hit the paw. When she tried to run away, she caught her by the paw and shot at point-blank range. And then he threw it into the woods.

Vacationers themselves called the police. Further, the circumstances of the incident were already clarified by people in uniform.

– Probably, if the administration did not want the dog to be on the territory, they should have called a trap, put up a normal fence, do something else – but do not shoot in front of the children next to the buildings. And yes, it’s just cruel.

On the video, which was filmed by the reader, you can estimate the distance from the scene to the residential building.

To understand what it was, we call the director of the sanatorium Vasily Kobel. He told Onlíner that this dog started circling the territory about three weeks ago:

– There were complaints from the escorts who bring groups of children to us that the dog rushed. They tried to catch it with a net, they thought at least to take it somewhere, to the village … They never caught it. Then the supply manager turned to the huntsman. Now the police are figuring out what’s going on.

The director especially notes: the shooting was carried out behind the fence, it was quite far from the buildings.

At that moment, Luchik was taken from the forest and sent for examination – they will look for rabies. And the fence began to be repaired.

We’ll be watching to see how this story ends.

Our channel in Telegram. Join now!

Have something to talk about? Write to our telegram bot. It’s anonymous and fast