Skip to content
Lizy Tagliani, victim of a scam

Lizy Tagliani He is undoubtedly one of the most supportive people in the artistic environment. Not only has she made collections to help those most in need, she is also committed to animal rights. Along these lines, she proposed to collaborate with a person who rescues dogs, cats and rabbits, but unfortunately her donation was not destined for what she believed.

In your account Twitter, the driver shared an anonymous post that hinted at the scam. “I have a relative who rescues animals (dogs, cats, rabbits, etc.), I always see her on Facebook asking for help for all those animals. One day he asked Lizy Tagliani (a genius who loves animals madly) for help and she gave him enough money to help some animals. Do you know what the daughter of p … who unfortunately is my family? The money was spent on her. What Lizy gave him he spent on clothes and sneakers. And the very con … kept asking for money for the animals! ”, The story began. And he concludes: “I have never felt so disgusting with a family member. Scam like that and put a photo of an animal to give pity and donate like that. God, it’s amazing. I just wanted to download that and who knows? It sure gets to Lizy ”. 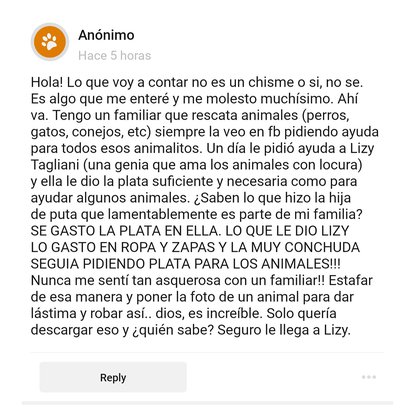 Attentive to this information, the driver expressed herself in this regard: “Good morning … if it’s true, I only lost money, but those little animals lost the possibility of improving their life … and the person who does it is going to pay it, nobody leaves with pending accounts”, wrote. 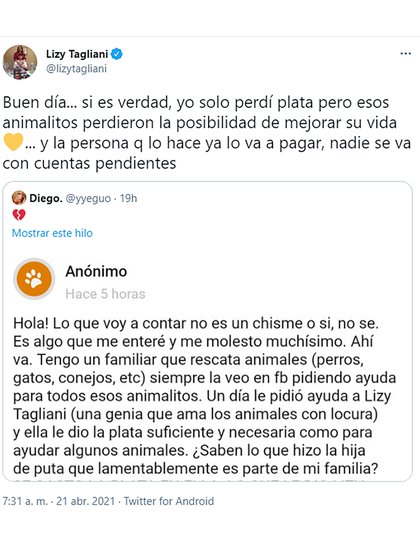 Lizy Tagliani’s response to the scam she suffered

This will surely not discourage you from continuing to collaborate with different foundations. At the beginning of March, she even decided to organize a collection among her neighbors to distribute supplies, clothes and sweets among the most vulnerable children.

“I am super happy because my neighbors in the neighborhood have brought me some things, there are some that I am selecting as useful, sweets and clothes, to send to a dining room where does my friend collaborate Pablo Gali. And as soon as I called him, he said: “I’m going there.” I love your commitment. When I was young, I always went looking for things. And now, to be able to return a little of the love they have given me, it gives me a lot of emotion. I send you a kiss and thank you all ”, he said in a video that he published in his Instagram, where he also showed everything he had managed to collect.

That same publication also accompanied her with a short text, in which she had added: “Here accommodating and selecting little things to collaborate with … Thanks to my neighbors and @tigreariano for your commitment and for never leaving helping for tomorrow, I love you … When I was a girl, I waited with such joy for the day to go looking for new clothes to go to school or to show off in my neighborhood. It is so nice to be able to understand and help others today no matter how little”.

Last year, Lizy revealed to Teleshow the most humble side of her childhood in Burzaco and then in Adrogué. “Doña Julia, I give private lessons to your children every day and you pay me with alfajores”, He proposed to his neighbor, the mother of the children and the owner of the store on the corner of his house at that time. “So, at the end of the week the mother gave me a box with six in it. Until they repeated and he told me: ‘Don’t come back to teach my children’. I was always very limited to study, “he recalled with a laugh.

See also  Animal transmission of Covid-19 to humans is "probable", WHO report reveals

Jimena Barón spoke of the romance between Daniel Osvaldo and Gianinna Maradona: “I am always surprised, otherwise I would not suffer”
Alex Caniggia’s strong response to Mariano Dalla Libera, who had criticized him for his performance on Masterchef Celebrity: “You will always be a failure”
Flor Vigna spoke of her separation from Nico Occhiato and ruled out a reconciliation: “We have different ways of loving, different times”