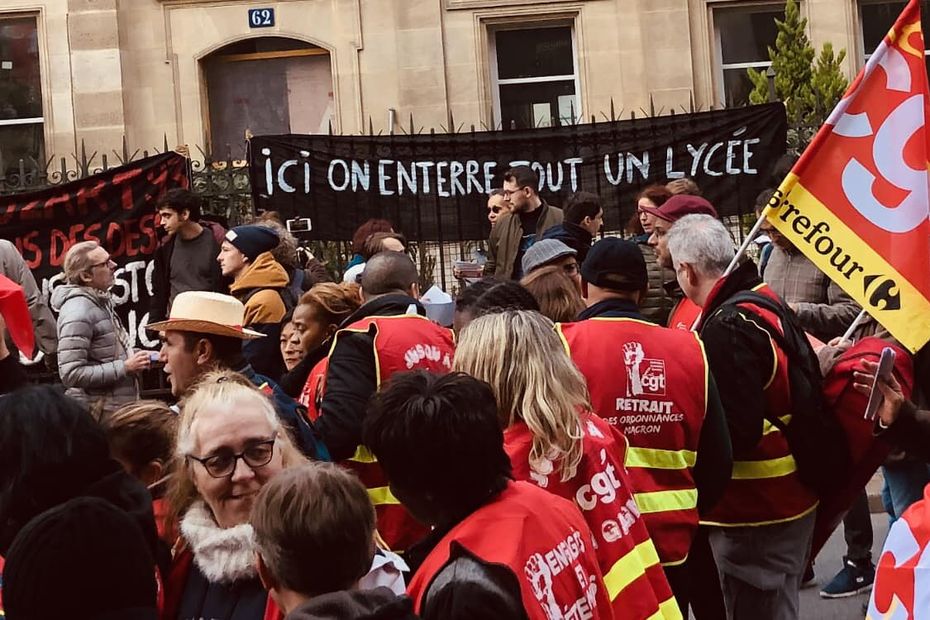 “Harassing management”, “humiliating remarks”, “verbal abuse”. At the Paul-Eluard college in Bonneuil-sur-Marne, at the Simone de Beauvoir high schools in Garges-les-Gonesses or Mozart in Blanc-Mesnil… In Île-de-France, nothing is going well between teachers and their management, a study shows the deterioration of the school climate.

At the Paul-Eluard college in Bonneuil-sur-Marne (94), the strike is renewed. Since November 8, only four teachers have been teaching, out of about fifty teachers. All are demanding the departure of their headteacher.

A a few months of retirement, Jean Michel Harvier, admits is “never have seen thata”. History and geography teacher at the Paul-Eluard college and national secretary of the SNES-FSUhe evokes an unprecedented situation which deteriorated with the arrival of the head of the establishment three years ago. He recounts these little evils which, taken end to end, poison the climate at the college.

Like, for example, this day when speaking of a student in difficulty, she would have said “ he couldn’t even be a postman”. Or this time when, to a student who was late in submitting his file, she refused him his trip to the snow class when the supervising team had done everything for him to be able to participate. Remarks “inappropriate and humiliating”, bullying, toxic and authoritarian management: “the staff is terrified”, explains Jean-Michel Harvier. Some of her colleagues are apprehensive about coming face to face with the college principal. A tel point that last April, the vast majority of them resigned from the mission of head teacher to avoid exchanges with the head of the establishment.

worrying when on knows that the establishment is classified REP (Network ofEducation Priority). Over the past 3 years, seven meetings have been held with theInspection academic. Mediations, letters, hearings, administrative investigation: everything has been tried. Most “despite the profs in tears and promises, nothing has changed”, laments Jean-Michel Harvier. In mid-September, an administrative investigation took place over one day. The results should be known this Thursday at the end of the afternoon. But already, a strike notice has been filed from Friday.

Profs who arrive the stomach ache in their establishment, daily tensions: the Paul-Eluard college in Bonneuil-sur-Marne is not the only one concerned in the region.

At the Mozart high school in Blanc-Mesnil (93), parents of elected pupils, high school students and teachers have been denouncing for more than a year the “harassing and brutal management”‘ of the headmaster. And do not count the actions taken to make him leave: strikes, right of withdrawal, filing of complaints, reports. Since the aggression of a student in the establishment, the tension is struggling to fall.

Same tensions at the Simone de Beauvoir high school in Garges les Gonesse (95). After having been heard by the supervisory authority, teachers and students ont returned to school on Monday. Most threaten to resume the blockade without “actions concrete” of the administration.

In their sights, in particular: “verbal abuse”, an inappropriate and humiliating attitude and remarks on the part of the school principal. For this teacher who wishes to remain anonymous, relations with her would be “exhausting, complicated, made up of constantly contradictory injunctions”, and would psychologically weaken some of his colleagues.

A degraded climate between adults

Is wanting the head of the establishment more and more frequent? Those targeted did not wish to answer our questions, evoking their duty of reserve. But a recent school climate study, conducted by theAutonomous of solidarity secular comes to provide elements of response that are surprising to say the least. Because if the climate has deteriorated in recent years, the origin is not to be found in the relationship with the students but between the adults.

In this survey, researchers Éric Debarbieux and Benjamin Moignard point”a real collapse in the quality of relationships between adults”which would explain the malaise of the teachers. 8 851 personal of the’Education were interviewed, and their answers were compared with another study, the first of its kind, conducted ten years ago. The observation is clear: between teachers and their management, unease is growing.

Nearly half of the respondents (48%) perceive a poor quality of the teacher-management relationship, this is 14% more than in 2013. 38.1% say they do not feel “respected” by their management, compared to 23.5% ten years ago. Sans surprisethis malaise is also perceived by school heads. They are 30%, against 6% in 2013, to “feel apprehensive before taking their service”; 28% of them, compared to 5% in 2013, have a degraded relationship with school life. We submitted this data to a headteacher.

Bruno Bobkiewick is principal in and establishment of Val-de-Marne and member of the union of principals, the SNPDEN-WHAT. He recognizes that the last five years have weakened the heads of establishments. “The health crisis and the very sustained pace of reforms a more exposed. Heads of establishments represent theEtat and this has contributed to the deterioration of human relations.” But for him, the management methods have not evolved: “We have not had any new team management instructions. We run the establishments as we used to run them before.” Only here it is: in certain establishments, asking for the head of the establishment would, according to him, have become a national sport. “There are well-identified establishments with professors of general hostility towards the institution and in which the principal becomes a fuse”, he explains. Before adding “Clumsiness on the part of headteachers can obviously happen… But you have to distinguish between what is clumsiness and professional incompetence, and it’s certainly not the profs who must to slice but the institution.”

So, isolated cases or underlying trend? The authors of the school climate survey sound the alarm. “Coming from a professional body that makes loyalty to the institution a cardinal value of its professional ethics, the degree of dissatisfaction measured in management must undoubtedly astrongly lert the powerss audiences on the nature and extent of the distrust of front-line actors“, they warn.