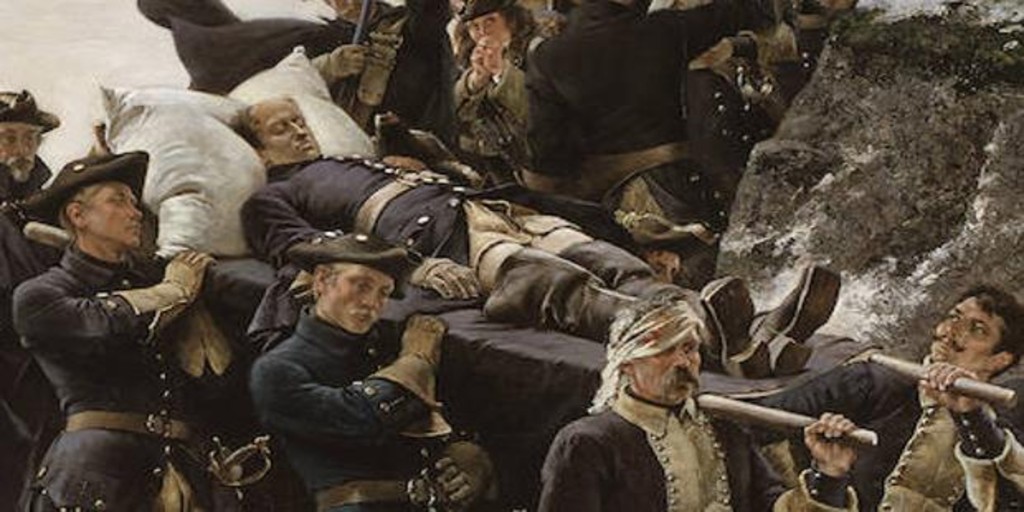 Considered as “one of the bloodiest confrontations in world history”, in the words of Peter Englund, started at 3.45 am on Sunday, June 28, 1709. It was a hot sunrise around the Ukrainian city of Poltava and the two great armies of Sweden and Russia had been staring into each other’s eyes for several hours, waiting for him to jump the spark and violence will break loose. All the soldiers knew that the decisive moment had arrived. “They were like two wild animals placed opposite each other, almost touching each other, with all the muscles in tension before the assault,” explained this renowned historian and academic of the Nobel Prize winners in his book “The battle that shocked Europe” (Roca Editorial , 2012).

It was the culmination of a long and brutal nine-year war for control of Northern Europe, which left more than 65,000 dead in combat. During the Modern Age, several empires of the old continent, such as Spain, Portugal, Great Britain or France, had dominated a large part of the world, but the Swedish had gone unnoticed among them. Something that was strange, if we consider that it was one of the greatest military and political powers of the 17th century, until at the beginning of the 18th century it began to suffer a series of economic difficulties that led it to curb its expansionism. And in the end there was the final catastrophe in the battle of Poltava that concerns us here.

This was characterized by the massacre of prisoners by both sides, in a symptom of cruelty rarely seen in those years. And, in addition, by the disturbing parallels that many historians see with the “rat war” (Rattenkrieg) developed by the Nazis during the Second World War. See, for example, the Battle of Stalingrad, but this time wreaking havoc with artillery of various calibers, musket balls, and sharp sabers and bayonets.

To give you an idea, of the almost 25,000 men that the almighty Charles XII of Sweden launched into the fight, some 5,000 died in combat and practically all of the other 20,000 were taken prisoner and put to work in the construction of the new imperial city of St. Petersburg. To these were added 1,700 slaves, wives, servants and children. Of all these, only 4,000 returned to the homeland, some after more than thirty years of captivity. The rest were executed.

Charles XII arrived at the battle of Poltava wounded, after he had been shot in the foot by a Russian sniper while reviewing one of the newly built trenches. He was having difficulty mounting his horse and was clearly at a disadvantage in terms of the number of fighters – Russia numbered around 42,000 – but he was convinced that he could crush Peter I the Great. The King of Sweden had gained extraordinary fame in the early 18th century, with his brilliant victories in the Great War against powers such as Russia, Denmark, Saxony, Poland or the Ottoman Empire. Successes that earned him the nickname of Alexander the Great of the North and that they made him underestimate his enemy.

In the past week there had been constant skirmishes between the two armies, most at the initiative of the Russians. June 27 was no exception, and a pair of cavalry squadrons overcame the posts of the first outpost and killed some Swedish soldiers. In the following hours, everything returned to tranquility awaiting the devastating outcome, after which, Charles XII hoped to continue on his way to carry out his long-awaited final attack on Moscow, the heart of Russia. But there was Pedro I, who wanted to end once and for all the empire that had dominated northern Europe throughout the 17th century and take the reins.

Even knowing that he had fewer soldiers and worse weapons, Carlos XII decided to attack first, confident that he could regain the initiative. The Swedes had full faith in their king, in their generals, and in their military capabilities, despite their inferiority. And at 3:45, they began to advance silently towards enemy positions to carry out their surprise attack. The Russian camp was on a small hill, only more or less effectively accessible by a passageway between two forests. On the flanks was a ravine overlooking a river and a quagmire that served as natural protection for Pedro I.

With the first rays of sun

Things did not start well for the northern Alexander the Great, as six of his battalions went astray in the middle of the night, being unable to follow their companions due to lack of light. When the order to attack was given, many of them did not know where they really were. It took them a long time to return to the battlefield, and when they finally succeeded, at around 5 in the morning, the fierce attack by the Swedes began. The first rays of sun were already on the horizon.

The Russians managed to resist the first challenge, both with the redoubts that were entrenched in the corridor and with the artillery stationed in the camp. Carlos XII doubted if what he had to do next was destroy these redoubts or go through them to face the bulk of Pedro I’s army as soon as possible. others, moving away so as not to fall into the Russian trap. That caused the casualties to be minimized, but the initial advantage of the surprise had already been lost.

When the sun began to shine, the situation of the King of Sweden was desperate. The casualties had grown and were already considerable, although at their expense they had managed to penetrate the camp. But the forces were faltering and the spirits were already on the ground, which made the Swedes not attack with much decision when they faced the enemy. They were isolated and, furthermore, they had no news of the infantry. And after five hours of combat, at exactly 9 in the morning, Pedro I ordered his powerful army to leave the camp and train in front of Carlos XII and what remained of his troops.

Wounded, demoralized by the casualties, tired and lacking in supplies, the defeat of the Swedes was a matter of time. Carlos XII tried to reorganize the situation from his stretcher, but all the attacks failed and at 11.00 he called for a retreat. The battle ended at noon, since the Russian cavalry did not immediately put the lace on, but tortured the Swedes from their own lines for an additional hour. Meanwhile, the defeated monarch gathered his few surviving troops and began the hasty flight to the south, carried on his stretcher in flight by his men. A totally pathetic image for who had been the Alexander the Great of the North.

Russia lost less than 1,500 men and went on to carry the dominant voice in eastern and northern Europe for the following centuries. So much so that the vast empire that the Romanovs built from then on was the one that was taken from them by the Communists, after assassinating the Tsar’s entire family, to create the USSR in 1918. A giant that remained on top of world power until its dismemberment in 1991. Sweden, on the other hand, ceased to be a power and its King managed to cross the Prut River by boat, accompanied simply by his personal guard, some officers and a small treasure that he had managed to preserve. He abandoned his men in Perevolochna, a town near Poltava, and then went to the city of Bender, in the Ottoman Empire. There he took refuge until 1714, when he returned to Sweden … incognito.