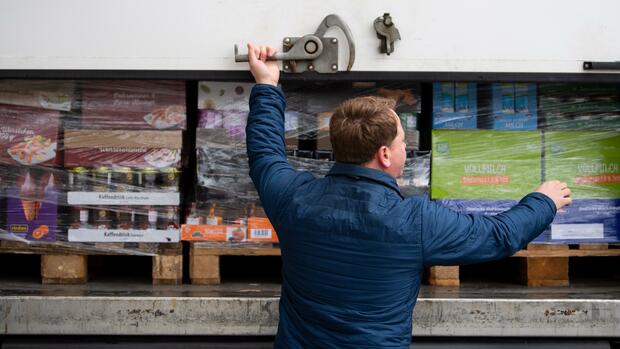 Dusseldorf Bottlenecks in pasta, flour and toilet paper, overcapacity in the seaports – the corona crisis is creating a hitherto unknown phenomenon in the supply of goods: While some transport companies are becoming scarce these days, others are trying to get short-time benefits because orders break down.

How the imbalances are currently distributed is shown by the figures of the Ulm freight exchange Transporeon, which are exclusively available to the Handelsblatt. After that, it is in particular the supply of food that most swirls the transport market.

“Before the corona crisis, a third of all food deliveries were usually sent to hotels, restaurants and canteens,” reports Transporeon CEO Stephan Sieber. “This market has now almost disappeared.”

Because significantly more food has been prepared at home since the actual shutdown, the former transport routes now lead to the supermarket. The logistics platform Transporeon has an increase of 20 percent in deliveries. Discounters like Aldi, Lidl or Netto have even received 25 percent more goods than usual in the past few days.

Logisticians are also seeing a similar role reversal in office supplies. “The supply of office buildings with office supplies is currently falling significantly,” observes Karl Gernandt, who oversees the Swiss forwarding giant Kuehne + Nagel for the major investor Klaus-Michael Kühne. However, the millions of relocations of jobs to the home office surprisingly inspire a completely different industry, as Gernandt observes in the logistics centers: “The demand for colorful espresso capsules is currently exploding.”

Not surprisingly, but much more seriously, the officially ordered store closings shift the flow of goods in retail. “The clothing stores of the Zara parent company Inditex are currently motionless,” reports a freight forwarder. On the other hand, the online department store Amazon benefits like no other from the empty swept pedestrian zones. In Germany alone, the US company recently announced that it plans to hire 350 additional workers.

Apple is now starting again, with the iPhone manufacturer now restricting itself to online sales in many regions. “In China, the production facilities and offices are open again,” reports Gernandt, “even in Wuhan.” In Europe, too, where Apple’s stationary sales have come to a standstill, online business via the e-fulfillment center is in full swing.

The corona virus no less separates the modes of transport into winners and losers. Container shipping has been shaken since the beginning of the year, and its departures from China have almost been stopped for almost 15 weeks. “We are anticipating a sharp decline in sales and profits this year,” feared Angela Titzrath, CEO of the Hamburg port operator HHLA.

The Hamburg port operator HHLA expects a strong decline in sales and profits this year.

She has every reason to be concerned: 75 ship calls from Asia to Europe have failed since the pandemic broke out, the Copenhagen-based consultancy Sea Intelligence calculated. Shipping lines worldwide have delivered 1.9 million fewer standard containers (TEU) since the beginning of the year than in the previous year. The Danish experts believe that their earnings were reduced by $ 1.9 billion.

Port operators like HHLA expect business to pick up again at the end of April, because the first freighters from China are currently on their way fully loaded. “This will probably not compensate for the decline in the first half of the year,” says Titzrath.

The situation is very different in air freight, which has had rather poor results in recent years. Because deliveries by sea have stalled in recent weeks, many companies are now ordering urgently needed goods by air.

The bottleneck is now correspondingly large. “For this reason, capacities are becoming scarce,” reports Transporeon boss Sieber, “because there is no transport space in the passenger aircraft.” Until now, they carried around 50 percent of the world’s airfreight volume, but many connections are now closed.

However, this leads to dramatic effects on freight rates, as Sieber reports: “In the spot market for air freight, short-term offers with up to more than doubled prices are traded because there is a lack of transport capacity.” The price increases primarily affect the pharmaceutical industry, like that Figures from the freight exchange show that many pharmaceutical manufacturers are now able to fly in the required raw materials, because otherwise their production would be at a standstill. In addition, as forwarders report, the demand for medicines is growing strongly worldwide these days.

There are now also capacity bottlenecks in truck traffic. “The range of European road transport has declined by almost a fifth within two weeks,” reports Sieber. “We see special bottlenecks for journeys to and from Italy, Spain, France and the Benelux.”

However, there were also industry differences here: “In the chemical and pharmaceutical industry as well as in trade, transport demand on the spot market is increasing – in the automotive industry it fell by 40 percent in the second half of March over a two-month period.”

Even the supply via the German waterways is not secured

Most manufacturers have ordered their plants to stop production until after Easter. “Many automobile forwarding companies are currently desperately looking for orders,” confirms Thomas Wimmer, CEO of the Federal Logistics Association (BVL). “Legislators should jump to the side of the damaged companies in the short term by suspending social security contributions or easing import sales tax.”

Not even the supply via the German waterways currently seems to be secured, which represents seven percent of the intra-German goods traffic. The strict entry and quarantine regulations in most countries in Eastern Europe are cause for concern, which make the work on German ships considerably more difficult for foreign crew members. Board members who travel to their home country during their free shift run the risk of no longer receiving an exit permit – or of getting into a 14-day quarantine on their way home.

“Half of our employees come from outside Germany,” says Ralph van Beek, responsible for personnel deployment at the Deymann shipping company in Emsland. “Many of them still offer extra work because they don’t want to be quarantined at home,” he says of the crews of his 35 barges. “The willingness is likely to depend on the duration of the crisis.”

If traffic on the Rhine, Main, Mosel or Elbe stalled, it would be particularly tight for power generators, steel cookers and chemical producers. The almost 2,000 German freighters in particular transport ores, coal, mineral oil and chemical products. Even eight million tons of food and beverages were transported over Germany’s waterways last year.

In the face of such distortions, it is becoming increasingly difficult for European freight forwarders to get a grip on the supply chains. “The supply chain has become a supply puzzle,” reports Karl Gernandt. What makes forecasting future flows of goods particularly difficult for the Kuehne + Nagel man: Because there is currently a shutdown in Europe and the United States at the same time, he says, there are hardly any alternatives in the event of bottlenecks. “It was different as long as the corona epidemic was largely confined to China.”

Future demand is also unpredictable for him. “The number of short-time workers and unemployed is currently increasing rapidly,” observes Gernandt. “Consumption will therefore not jump back to the old level immediately after the lockdown.” With his request, he should therefore speak from the soul of many logistics companies: “We must not leave the fight against the corona crisis to the politicians alone,” he warns. “The economy urgently needs to be at the table.”

More: This is how companies secure their liquidity in the corona crisis