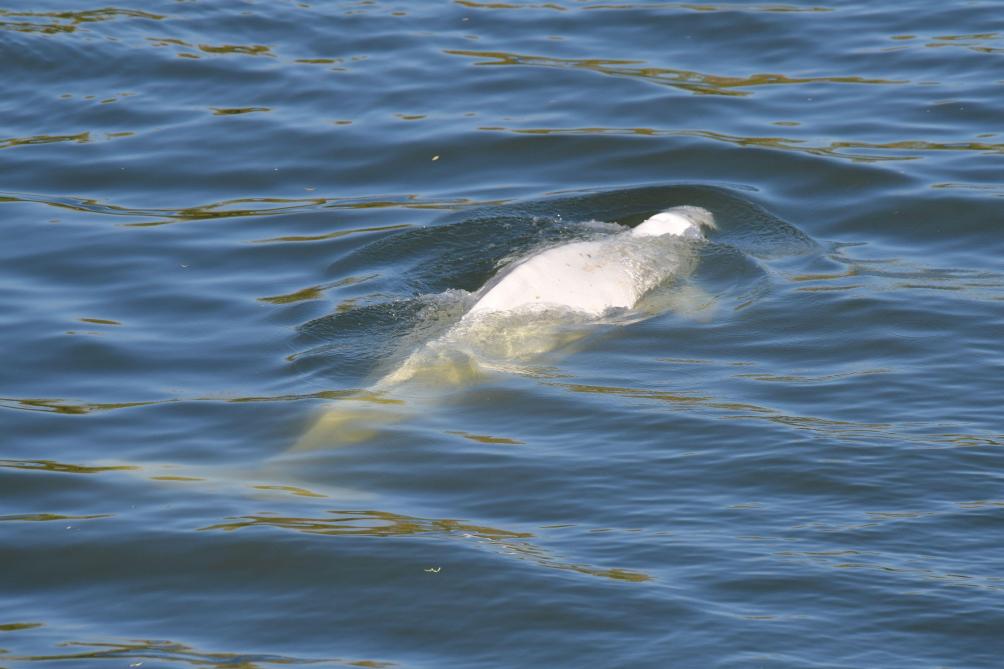 A beluga has been spotted in the Seine since Tuesday. The animal had to enter a lock in order to be cared for and fed. This situation, according to the organization Sea Shepherd, represents a “risk of additional stress that we cannot take”.

Lhe beluga, spotted in the Seine on Tuesday, entered a lock on Friday evening, 70 km from Paris, a situation which represents a “risk of additional stress” for this cetacean, which refuses to feed. The lock in which entered the beluga, a protected species of cetacean usually living in cold waters, is now closed and prohibited to navigation until further notice, according to the prefecture of Eure.

But this situation can also represent “a risk of additional stress that we do not want to take”, warned AFP the president of the NGO Sea Shepherd, Lamya Essemlali.

She lamented that “attempts to feed in the river have so far not interested the beluga” but that there is still hope that “it will be different in the lock”.

“We would like him to eat, but if he does not react positively it will become complicated”, she continued about the animal, now isolated in the lock of Notre-Dame de la Garenne near of Vernon, 70 km northwest of the capital.

“We must act quickly”

She was pessimistic about the possible consequences if the animal does not eat: “veterinarians specializing in beluga whales tell us that we must act quickly, its state of thinness being very advanced, and take it out of the water to provide him with care promises to be very difficult”.

Gérard Mauger, vice-president of the Cotentin Cetacean Study Group (GEEC) continued to observe the beluga on Friday. “He has the same behavior as yesterday, very evasive. It makes very short appearances on the surface, followed by long apneas,” Mauger said.

Approaching about fifty meters, “we made acoustic recordings, with our engines cut, but he did not make any sound emissions”, he regretted.

Four boats were in the area on Friday, according to Mr. Mauger, that of the Sdis (Departmental Fire and Rescue Service), the OFB (French Office for Biodiversity), Sea Shepherd and the SNSM (National Rescue Society). at sea).

In early July, Sea Shepherd announced that it had observed a cetacean presented as a fin whale in the Le Havre estuary. In May, an orca found itself in difficulty in the Seine between Rouen and Le Havre. The operations to try to save the cetacean had failed and the animal had finally died of starvation.

The necropsy – a post-mortem examination carried out on an animal – had confirmed the “poor physical condition” of the orca, an “immature” female of more than four meters and 1,100 kg. It had uncovered a bullet lodged in the base of the mammal’s skull.

“No certainty” could not be established on the link between the ammunition and the death of the killer whale, the experts favoring “the hypothesis according to which the animal died of starvation”.

This sad ending, “is what we want to avoid with the beluga. For us, it is necessary to do a DNA test quickly to know its origin and to carry out a repatriation”, underlined Ms. Essemlali.

The second known beluga in France

“The emergency is already to feed him with dead fish, probably frozen herring, to prevent him from running out because the environment is not very welcoming for him,” said Ms. Essemlali.

According to the Pelagis observatory, a specialist in marine mammals, this is the second beluga known in France after a fisherman from the Loire estuary had brought one up in his nets in 1948.

In 1966, another individual had traveled up the Rhine to Germany and in 2018, a beluga was observed in the Thames estuary in England, recalls Pelagis.