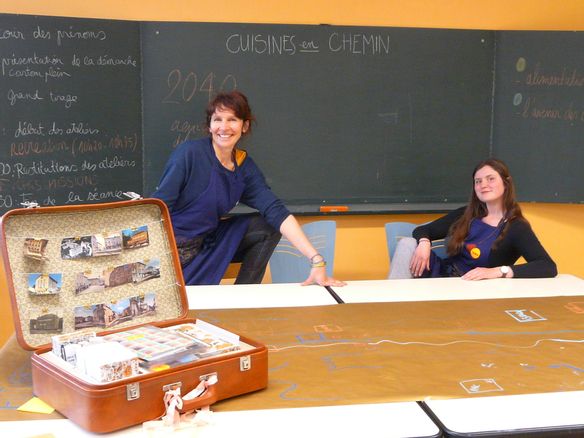 Artistic and cultural education (EAC) has existed on the territory of the community of communes Ambert Livradois Forez for two years. This year, seven projects are in the spotlight, with multiple partners and various forms of artistic or cultural expression, to reach an ever wider audience.
Thus, in collaboration with the Bief and the company La Maraude, the show My heart in a paper makes the link between education and creation.

Workshops have been conducted with children, combining the practice of music, sound effects…

With Sowing in the territory, itinerant writing was in the spotlight: six “traveling” writers made a seven-day journey between Livradois and Forez, discovering the paths and meeting the inhabitants. A journey that ended with Bouquine Job.

Receive our leisure newsletter by email and find ideas for outings and activities in your region.

Thanks to Cie Mû, contemporary dance has become accessible to students from Olliergues, Vertolaye and Marat. Workshops were offered around the creation Entre noises by Patricia Kuypers and Franck Beaubois. “It seemed important to me to make children aware of contemporary dance so that they don’t feel excluded from it in the future,” comments Jérôme Bru. They worked on sound, movement, image. But there will be no restitution, that is not the goal. »

Through its collaboration with Arfi, the culture department has chosen to support “artists who are not from the territory but who work there. » The collective of musicians worked on the « Local polar » project to create a film-concert from the collection of anecdotes and legends on the territory. “They used this oral heritage to write a screenplay with the school of Arlanc and the school of music in Ambert”, reports the head of the culture department.

ALF is also involved in the serenades given as part of the La Chaise-Dieu festival. The quintet “Le concert impromptu” and the Departmental Center for Traditional Music and Dance (CDMDT) of Puy-de-Dôme have carried out work around Emmanuel Chabrier at the Jules-Romains college. The restitution open to all will take place on Sunday at the high school amphitheater. And Friday, July 1, it is the work carried out by the trio Louise with the pupils of Cunlhat and Ambert within the framework of the festival “Voice and heritage” which will be proposed in Marsac.

“Beyond the Hill”, the arts and cultural education project has 25 elementary classes singing

The most emblematic project of this EAC is undoubtedly “Kitchens on the way” by Carton Plein: one of the components of the research and creation lab “Vieillir vivant”. “It’s a wonderful, intergenerational work on aging well and living well,” explains Jérôme Bru. Between schools and Ehpad, exchanges have been organized on the theme of food. Backed by postcards, the children asked the seniors about their childhood culinary memories. Cooking, memory, to question the future, to see how young people project themselves. »

And to add: “A first restitution took place during the Showcases which speak and the subject will be raised again during the Festival of the station of Utopia, tomorrow Saturday (read below). All these projects are at the crossroads of art and social issues, concludes Jérôme, they have affected hundreds of people in the area. »

A collective work
It is within the framework of a territorial agreement that the community of communes signed this EAC with the Drac, National Education, the Region and the Department. “An EAC project is not just for schoolchildren,” explains Jérôme Bru, head of ALF’s culture department. We certainly go from nursery to high school but also in specialized establishments such as Ehpad, IME, Esat, and towards the general public… We work on three axes: the meeting with an artist or a work, artistic practice , the heart of the project, so that everyone can “get their hands dirty”, and finally the contribution of knowledge through a conference for the general public, for example. ALF has therefore chosen to work with local artists and associations. “The culture department sets up the various projects with other departments,” explains Jérôme Bru. It is always a collective work. »