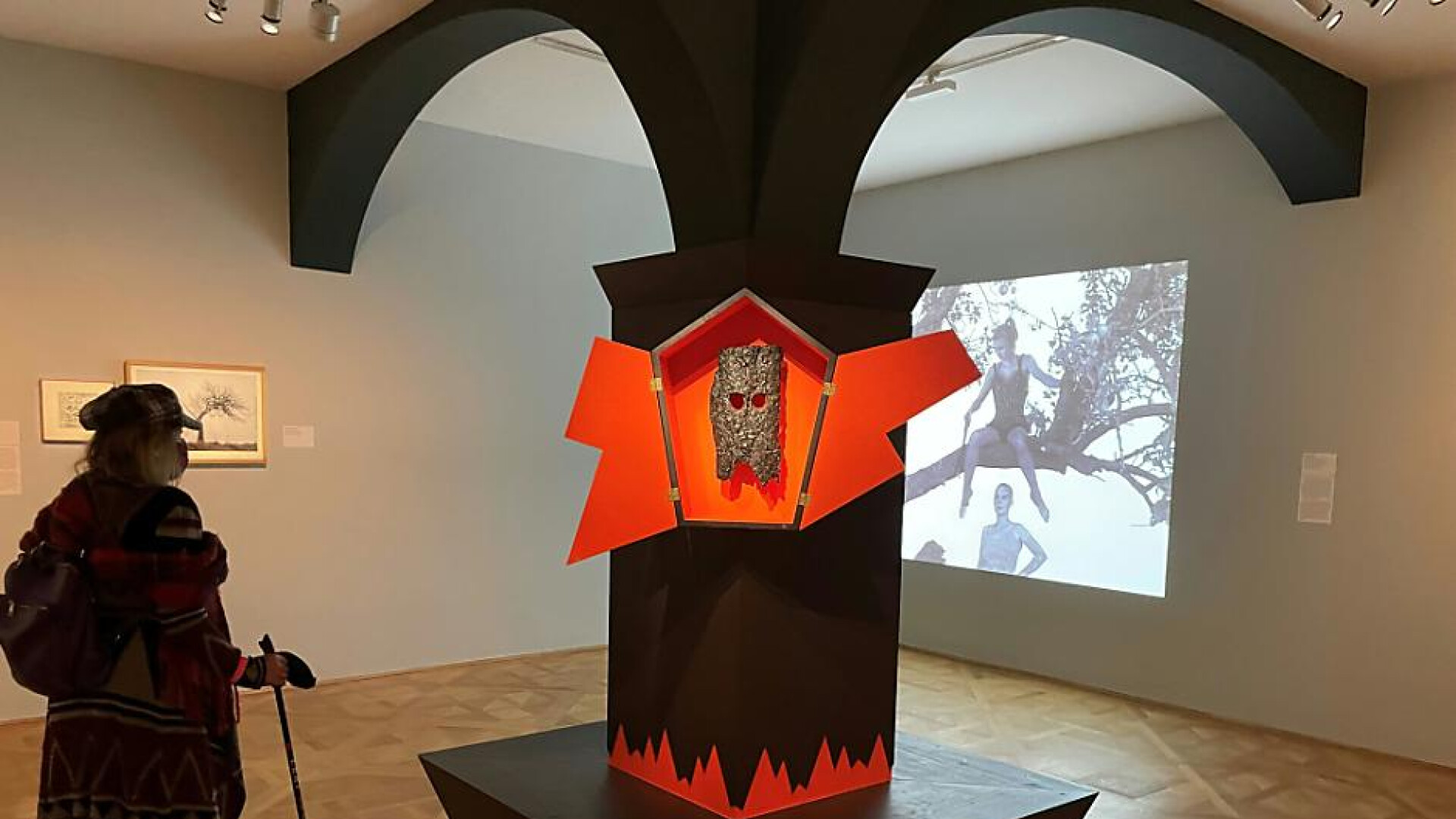 The show, which runs until January 8, 2023, therefore deals with “picture history, intellectual history, history of ideas,” says Rollig. Curator Miroslav Haľák selected 76 artists. The oldest object is a Lenten cloth from the 15th century, the youngest exhibits are commissioned works created in situ, such as Jakub Spanhel’s corner installation “If you want to destroy your forest, plant spruce trees, nothing but spruce trees”. Giovanni Segantini’s main symbolist work “The Bad Mothers”, a Praterallee by Olga Wisinger-Florian or a tree by René Magritte, “Blossoming Chestnuts” by Emilie Mediz-Pelikan or reduced depictions of trees by the Gugging artists Johann Korec and Oswald Tschirtner span a wide arc . Like many other works, Nilbar Güreş’ photo work “Headstanding Totem” not only refers to the mythological content of the subject, but also to the human work of destruction that is most vividly expressed in a video by Asta Gröting: In “Apple Tree” one is sawing of the two performers happily on the branch on which they sat.

Both the head of the museum and the curator emphasized that the exhibition should also be understood as a commentary on the impending climate catastrophe, in which forest fires and deforestation are among the major problems. “Art is increasingly becoming an ambassador of higher content,” said Haľák, who divided the exhibition into three sections, which, however, do not differ very clearly from one another: tree of knowledge, tree of knowledge, axis of the world. Beginning with the Fall of Man in Paradise (represented, among other things, by KHM loans from Lucas Cranach’s workshop), the tree has always been much more than mere decoration, according to the curator: “Hardly any other natural object has become a projection screen more often than the tree.” A small section deals with the ideological instrumentalization of the tree during National Socialism, for example, a few meters away the peanuts laugh at you, standing on a cleared area in front of a cut tree trunk (Jimmy Zurek: “Ama Mater”). The choice cannot always avoid the problem of arbitrariness.

An exhibition with this content must also meet ecological criteria in the production, emphasized Rollig. The Belvedere, which is proud of its certification as a “green museum”, has on the one hand attached importance to the fact that the radius of lenders is not too large (allegedly the object that has traveled the furthest comes from Turin), on the other hand the catalog is CO2-neutral produced and consistently dispensed with plastic. Wall texts were painted on using paper templates, the object cards are made of seed paper. Haľák: “There are still active seeds in the paper. If you plant this paper, something will grow – hopefully.”

Silence reigns in the exhibition – the specially curated soundtrack can not only be taken home on CD, but can also be enjoyed during the visit via audio guide or the museum app Smartify. A supporting program with artist talks and a film program in the Blickle cinema is dedicated to topics such as “Art and Ecology” or the Family Tree or “Ecology and Forestry as Reflected in the Collection”.

Incidentally, in the Belvedere you can also switch from the trees to the animal kingdom: Rona Pondick, represented in the Marble Hall of the Lower Belvedere with a “Head in Tree”, is showing “Monkeys” in the Carlone Hall of the Upper Belvedere at the same time: in her sculptures of human The US artist has inserted casts of her own body parts into animal hybrid creatures, which she previously removed and reduced using 3D technology.