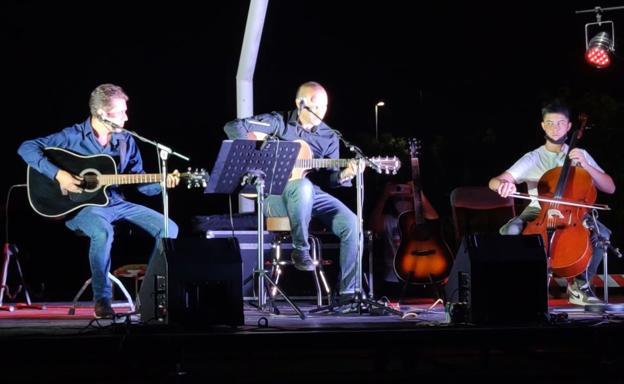 Juan José Valle and his son, Nicolás, apply imagination and intelligence to transport the songs to a guitar and cello structure that resizes them with intimacy and biographical evocation

This Saturday the 10CuerdasPop concert was held on the sports courts of the Urbanización Bizarricas de Villares de la Reina. Organized by the Department of Education and Culture, and with compliance with all the health security measures demanded by this pandemic time, the summer night invited the old to enjoy musical evenings and social interaction, to immerse themselves in culture and its face-to-face exhibition in the public square. 10CuerdasPop is a creative project dedicated to covering the classic repertoire of Spanish pop. It is an unusual proposal due to the singularity of adding to the sound of the six strings of an acoustic guitar the sober and elegant four of the cello. This sonic convergence gives name to those ten strings with which this original formula was born a year ago. Juan José Valle on voice and guitar and his son Nicolás Valle on the instrument that most closely resembles the human voice, make up this tandem in charge of reviewing mostly famous songs.

They reread iconic songbook from popular culture that happily skips different decades and indistinct musical styles. The popularity of the themes makes them instantly recognizable and emotionally and biographically evocative at the same time. They are pieces that have built intergenerational identities, have enlivened everyday life and enjoy privileged places in popular devotionals. There are undeniable names such as Joaquín Sabina, Miguel Ríos, Los Secretos, El Último de la Fila, Hombres G, or Alaska and Dinarama, but there are also others who expand the sonic palette of the project such as José Luis Perales, Nino Bravo, José Feliciano and Los Brincos, or the more contemporary Coque Malla, Leiva and Stool. To this heterogeneous inventory, father and son apply imagination and intelligence to transport the songs to that guitar and cello structure that resizes them with intimacy and biographical evocation. They free songs from electricity, but keep their muscle and their ability to induce emotions intact in performances of brilliant solvency and inventive re-readings.

Among this trail of classics they interspersed a moving piece of their own authorship entitled Marzo, and La tarantela, a cello solo that requires virtuosity and which was rewarded with a shower of applause. On this occasion 10CuerdasPop had the guest artist Hugo Bernalt. Together they sang a fantastic Pongamos que hablo de Madrid and the touching Esos ojos negros (Ducan Dhu), with which they invited the large audience to choral feedback. They again had the presence of Bernalt to close the night with La flaca by the eternally remembered Pau Donés and his Jarabe de Palo. This concert has been the starting gun for the numerous concerts that 10CuerdasPop has closed to share in different locations in the province of Salamanca. An endearing and very careful proposal to peacefully liven up the summer nights.