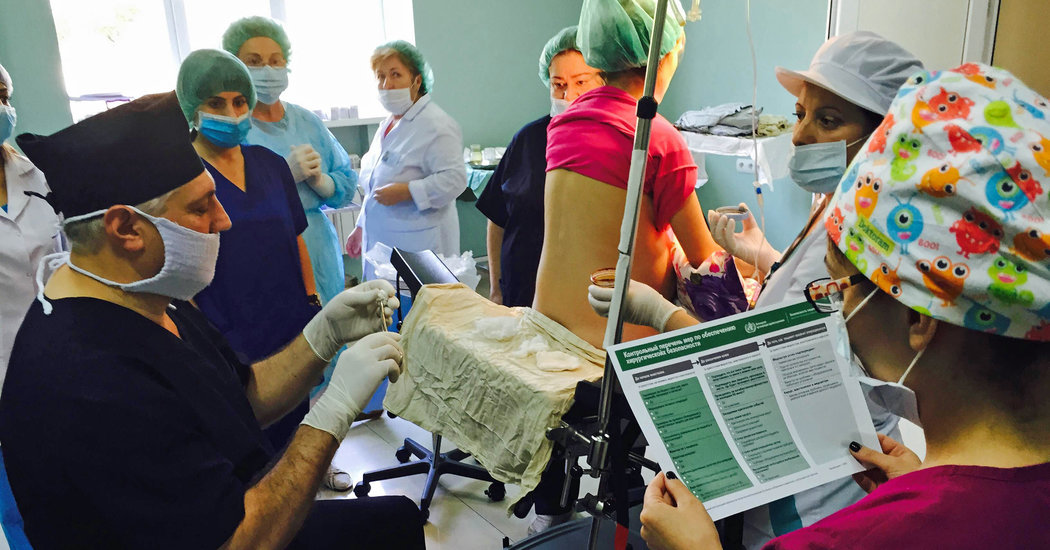 Ten years ago, checklists for surgeons were in fashion. Inspired by the pre-flight routines of airline pilots, it was shown that surgical checklists prevent tragic errors, reduce infections and save lives.

Dr. Atul Gawande, a surgeon trained at Harvard, defended them in The New Yorker and wrote a book about them, “The Checklist Manifesto: How to do things right.”

A checklist of two minutes and 19 items was finally approved by the World Health Organization, which advocated its use in all hospitals in the world. The checklist is even available as an application for cell phones of the United Nations Institute for Vocational Training and Research.

It includes many simple steps for surgeons preparing to operate, some as basic as making sure that the correct patient is at the table and that the incision site is correctly marked, and that anesthetics, oxygen and blood for transfusions are available.

Now that a decade has passed since the recommendation of W.H.O., a non-profit organization Founded by Dr. Gawande, he has surveyed almost 1,500 hospitals in 94 countries to see how often a surgical checklist is used.

The adoption has been irregular, according to the report published Wednesday by the non-profit organization Lifebox and by Ariadne Labs, a joint venture of Harvard T.H. Chan School of Public Health and Brigham and Women’s Hospital, both in Boston. (Both institutions seek to improve surgery and anesthesia in poor and middle-income countries).

The study blamed many factors: surgeons who resent the implication that they can make dangerous mistakes, lax application by hospital administrators and impotence of nurses in some cultures.

In poor countries, the majority of surgeries are emergencies, such as caesarean sections, appendectomies or trauma repair after a car accident. Rushed surgical teams are less likely to use a checklist.

In poor countries, there are often failures in support systems aimed at ensuring the availability of oxygen, blood transfusions and postoperative antibiotics, and sometimes even in clean operating rooms.

When the checklists are strictly adhered to, missing even one of those elements can prevent the operation from starting. Instead, some hospitals simply avoid the checklist.

There is a huge room for improvement, according to the study.

For example, up to 95 percent of Africa’s population does not have access to safe and affordable surgery, and African patients are twice as likely to die after an operation, compared to the world average, he said. Dr. Bruce M. Biccard, anesthesiologist at the University of Cape Town and leader of the African Surgical Results Study, which produced some of the data used in the new report.

In countries where doctors and nurses do not speak one of the six official languages ​​of the United Nations: Arabic, Chinese, English, French, Russian or Spanish, a checklist is less likely to be used. In addition, cultural barriers have hindered its adoption.

The checklist includes the requirements that doctors and nurses present and confirm that everyone has the same understanding of how the operation will proceed ideally. But teamwork can be difficult to introduce, both in traditional cultures based on hierarchy and obedience and in intensely competitive environments like those of American medical schools.

Even hospitals that faithfully used a checklist often adapted it to local circumstances, according to the report. Some translated it into Tagalog and Amharic, for example. A West African surgical team added the requirement that the hospital generator be running. A Guatemalan team added pain control medications to the list of requirements.

A decade ago, as a young surgeon in Ethiopia, Dr. Abebe Bekele, dean of the University of Global Health Equity in Rwanda, tried to present the checklist at the hospital where he worked in Addis Ababa, after seeing her when he trained in Seattle.

“No one else was on board,” Dr. Bekele, a Lifebox report consultant, said in a telephone interview. His own team used it when he insisted, but not when he worked with other surgeons, who were generally much older than his nursing staff.

“I had the momentum, but not the wisdom on how to implement it,” he said.

However, two years later, after studies showed that the checklist reduced deaths by 24 percent and major complications by 60 percent, he was more successful “by bringing everyone to a single room to discuss. and write the checklist. ”

Since then, younger surgeons have become more receptive, Dr. Bekele said, and now the checklist is taught in the rapidly expanding medical schools in Ethiopia.

External influences can be powerful, the report said. He highlighted the charity Mercy Ships as an instrument to present the checklist to Africa. Mercy Ships has a hospital ship that docks for months in several port cities in Africa, performing thousands of surgeries.

At each port of call, it also trains dozens of local doctors.

When Africa Mercy was docked in Cotonou, Benin, from 2016 to 2017, for example, sent teams to 36 hospitals to run workshops on the use of a surgical checklist.

Prior to training, only about 30 percent of surgeries performed checklists incorporated. Then, almost 90 percent did so, and compliance was still 86 percent during follow-up visits a year later.

Sony and Facebook withdraw from GDC due to coronavirus concerns

Facebook withdraws from the Game Developers Conference due to coronavirus

The parents allegedly “abandoned sick children at the airport and flew...

Brian Kennedy was once a great USC booster, but not anymore

15 amazing things to get at L.L.Bean’s weekend mass sale

2016 presidential candidates react to the shooting in Oregon

Half-Life games are free on Steam for the next two months.

InterviewBit gets $ 20 million to grow its advanced online computer...