From May 20, it will be possible to fly from Yekaterinburg to Khabarovsk daily (except May 23 and 30). This was reported in the telegram channel of the airline “Ural Airlines”. “There are subsidies for pensioners, students, large families and people with disabilities – 6,200 rubles one way. Children from 2 to 12 years old … Read more 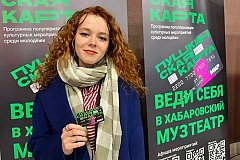 The girl was taken to the hospital A photo: Lyudmila MARCHUK In the Khabarovsk Territory there was another attack of stray dogs. In Muhen, a six-year-old girl was playing in her yard. When the child was about to leave, suddenly an animal ran out from behind the garbage can. The dog attacked the girl at … Read more

Doghunter victim died in minutes Photo: Elena VAKHRUSHEVA (KP-Yaroslavl) Dog hunters have become active again in Khabarovsk. A few days ago, at about 23:00, on 123 Kalinin Street, a girl and a guy passing by saw a dog that looked very bad – the dog had a strange gait, after which the animal fell and … Read more

Yuri Yagodin, Deputy Chairman of the Khabarovsk City Duma, Chairman of the Committee on Social Issues. Photo: Sergey Pyatkov Since 2019, a kind of social experiment has been taking place in Khabarovsk. It is called “Continuing Education”. Its meaning is to identify and develop a child’s talent. How it works? How popular is additional education? … Read more

September 15, 2021 The opening of the digital education center “IT-cube” took place at the school of the Vostochnoye village of the Khabarovsk region. It became the third for the region and the first located in the countryside. The ceremony was attended by Deputy Chairman of the Government of the Khabarovsk Territory for Social Issues … Read more

The former head of the Khabarovsk Territory, Sergei Furgal, who is in jail on charges of organizing murders, said that the investigation had no evidence against him. A fragment of Furgal’s conversation with lawyers was published on the Youtube-channel “Shtab Furgala”, he is quoted by Siberia.Realii. According to the former governor, during the investigation, he … Read more