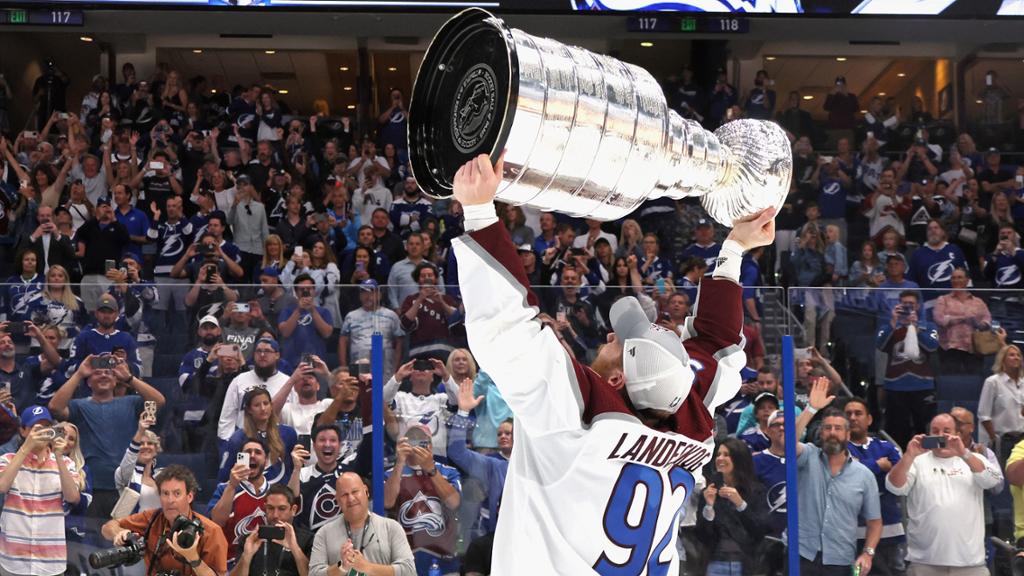 A new wrinkle to the power rankings will see the 13 NHL.com and LNH.com staff members who decide where each team is ranked offer their thoughts on why they voted the way they did.

With little surprise, the Colorado Avalanche are first and the Tampa Bay Lightning are second in the preseason Super 16. The Avalanche won the Stanley Cup last season and return as a favorite to repeat this season.

Four of the top five teams and five of the top eight are from the Eastern Conference. There is some trepidation about where to put the Boston Bruins and Washington Capitals, perennial contenders who have key players dealing with injuries and age to start the season.

Here is the preseason edition of the Super 16, with thoughts from the staff members whose individual rankings are below:

“There is no reason to bump the defending champions from No. 1 entering the season, especially with center Nathan MacKinnon in his prime and defenseman Cale Makar still entering his prime. They still have the core and much of the depth that made them a championship team.” — Nicholas J. Cotsonika, columnist

“Andrei Vasilevskiy, Victor Hedman, Steven Stamkos, Nikita Kucherov, Brayden Point, Anthony Cirelli, Mikhail Sergachev and Jon Cooper. Are those seven players and the coach enough of a reason for me to rank the Lightning No. 2 in our preseason Super 16? Some might argue it’s not. Well, let’s add in all the impressive depth players like forwards Alex Killorn, Nicholas Paul, Brandon Hagel, Pat Maroon, Ross Colton and Corey Perry, and defensemen Erik Cernak and Ian Cole. Pedigree. Experience. The Lightning still have it all. They’re still in the dynasty window. They’re No. 2 behind Colorado.” — Dan Rosen, senior writer

Video: Lighting still at the top in Atlantic

“I love the idea of adding a motivated defenseman in Brent Burns to a team that was one game away from the Eastern Conference Final last season without its starting goaltender, Frederik Andersen. Though the Hurricanes lost center Vincent Trocheck in free agency and will be without newly acquired forward Max Pacioretty until February because of an Achilles tendon injury, they’re a team that has experience and urgency and a very good coach in Rod Brind’Amour. They’re not quite as good as my No. 1, the Avalanche, but they’re going to be a threat, which is why I have them at No. 2.” — Amalie Benjamin, staff writer

“The Panthers traded forward Jonathan Huberdeau to the Calgary Flames after he finished tied for second in the NHL in points (115) with former Flames forward Johnny Gaudreau. But I love the addition of forward Matthew Tkachuk, who they acquired in that trade and who had a career-high 104 points last season. The Panthers need to show me they can go farther in the Stanley Cup Playoffs, but I have them ranked No. 3. They have plenty of scoring options, more grit with Tkachuk, and if goalie Sergei Bobrovsky can put together another strong season, the Panthers will be tough to beat.” — Tracey Myers, staff writer

“The Rangers seem primed to take another step after reaching the Eastern Conference Final last season, which is why I ranked them No. 2. Trocheck will prove to be a solid pickup; he is an effective two-way center who has scored at least 20 goals four times, so he should fit in nicely behind first-line center Mika Zibanejad. New York also just happens to have arguably the best goalie in the NHL in Igor Shesterkin, who has the ability to start 60 games and should build on his Vezina Trophy-winning season.” — Brian Compton, managing editor

“The Flames may have lost two 100-point scorers in Gaudreau and Tkachuk, but they traded for one of the top scorers in the NHL last season in Huberdeau and signed one of the top free agent forwards in center Nazem Kadri, fresh off winning the Stanley Cup. They also added defenseman MacKenzie Weegar and still have Jacob Markstrom, runner-up for the Vezina Trophy as best goalie in the NHL last season. Calgary should be right there again this season as one of the top teams in the West, which is why I ranked them No. 4.” — David Satriano, staff writer

“The Oilers didn’t lose to the Avalanche in the Western Conference Final only because of mediocre goaltending, but it certainly contributed to them getting swept. They made a major upgrade at that position, signing Jack Campbell to a five-year contract. With center Connor McDavid, who will no doubt hunt for his fifth Art Ross Trophy, and center Leon Draisaitl, who scored an NHL career-high 55 goals last season, Edmonton again should dominate on the power play (third last season at 26.0 percent). To me, the Oilers are frontrunners for the Pacific Division title, which explains why I ranked them second among Western Conference teams and No. 5 overall.” — Paul Strizhevsky, staff writer

“There’s a lot to like about the Maple Leafs, which is why I put them at No. 3, higher than the rest of my colleagues. For starters, they return the best goal-scorer in the NHL and the reigning most valuable player in center Auston Matthews (60 goals, 106 points). Defensively, coach Sheldon Keefe helped improve the unit in 2021-22, when Toronto allowed the ninth-fewest shots on goal per game in the League (30.6). Additionally, defenseman Morgan Rielly (21 power-play assists) helped lead a power play that finished first in the NHL at 27.3 percent.” — Mike G. Morreale, staff writer

“Even with the departure of forward David Perron, who signed with the Detroit Red Wings, the Blues return eight players who scored at least 20 goals last season, a reflection of their depth. Whether they go up or down in these rankings likely will be contingent on the play of goalie Jordan Binnington. For now I have them at No. 9, which is exactly where they ended up in the NHL standings last season.” — Mike Zeisberger, staff writer

“I have the Wild at No. 8. They lost to the Blues in the Western Conference First Round last season, so it might be forgotten that they finished fifth in the NHL with 113 points (53-22-7). Losing forward Kevin Fiala, who was traded to the Los Angeles Kings because Minnesota didn’t have the NHL salary cap space to re-sign him, will hurt, but young forward Matt Boldy, 21, could help fill the void. Whether the Wild’s goaltending is as strong with Marc-Andre Fleury and Filip Gustavsson as it was at the end of last season with Fleury and Cam Talbot (traded to the Ottawa Senators for Gustavsson) also is a question mark, which contributed to my decision not to rank them higher.” — Tom Gulitti, staff writer

“I have them at No. 11 now, but any team led by center Sidney Crosby remains one of the best in the NHL. Six of the Penguins’ seven 15-goal-scorers return from last season, including center Evgeni Malkin. Defenseman Kris Letang, who led Pittsburgh with 58 assists, is back as well. A healthy Tristan Jarry in goal was all that stood between the Penguins and winning a postseason series for the first time since 2018; with better health this season it’s going to be hard to overlook the Penguins as one of the better teams in the League.” — Adam Kimelman, deputy managing editor

“The Predators are my dark horse from the West this season, but I ranked them No. 10 because it is hard to put them ahead of some of the dominant teams in the conference at the start of camp. For me, it all starts in goal with Juuse Saros, who might be the best goalie in the Western Conference. Ryan McDonagh is a big addition to a solid corps of defensemen, anchored by Norris Trophy candidate Roman Josi. If the Predators can find some scoring, they will be dangerous.” — Shawn P. Roarke, director of editorial

“The Kings could take another step after qualifying for the playoffs last season for the first time since 2018. In fact, I considered ranking them higher than I did at No. 14 with the addition of Fiala, and with defenseman Drew Doughty returning to health after missing the final 24 games last season with a wrist injury. But I decided to be a little conservative and wait to see how the Kings’ young players, such as defenseman Sean Durzi, 23, and forwards Quinton Byfield, 20, Arthur Kaliyev, 21, and Rasmus Kupari, 22, progress after making key contributions last season.” — Gulitti

“Look out for the Stars under new coach Peter DeBoer, who reached the Stanley Cup Final in his first season with the New Jersey Devils (2011-12) and San Jose Sharks (2015-16). DeBoer has a knack for instant success. His coaching style allows offensive players to be unleashed. The Stars were a conservative team under former coach Rick Bowness and it worked, but defenseman Miro Heiskanen might be the biggest beneficiary of a more up-tempo, aggressive, push-the-pace approach they’ll have under DeBoer. Heiskanen could play his way into the Norris Trophy discussion this season. I ranked the Stars ninth. They’re a team to watch in the West.” — Rosen

Video: Can the Stars take the next steps this season?

“Three key players — forward Brad Marchand, and defensemen Charlie McAvoy and Matt Grzelcyk — are recovering from surgeries and will not start the season. Their top two centers, Patrice Bergeron and David Krejci, are 37 and 36 respectively. This team has the pedigree to move up the rankings but only if it can fend off the injury bug and Father Time. For now I have them at No. 13, but clearly some of my colleagues think that’s generous.” — Zeisberger

“The Capitals will greatly miss injured forwards Nicklas Backstrom and Tom Wilson to start the season, but they’ll find a way to stay in the mix, which is why I put them at No. 14. General manager Brian MacLellan did a good job this offseason to fill the void, with the acquisitions of forwards Dylan Strome and Connor Brown. Darcy Kuemper will be the real No. 1 goalie the team was looking for in recent years and Alex Ovechkin will still be ‘Ovi’ at 37 years young.” — Robert Laflamme, LNH.com senior writer

HERE’S HOW WE RANKED ‘EM