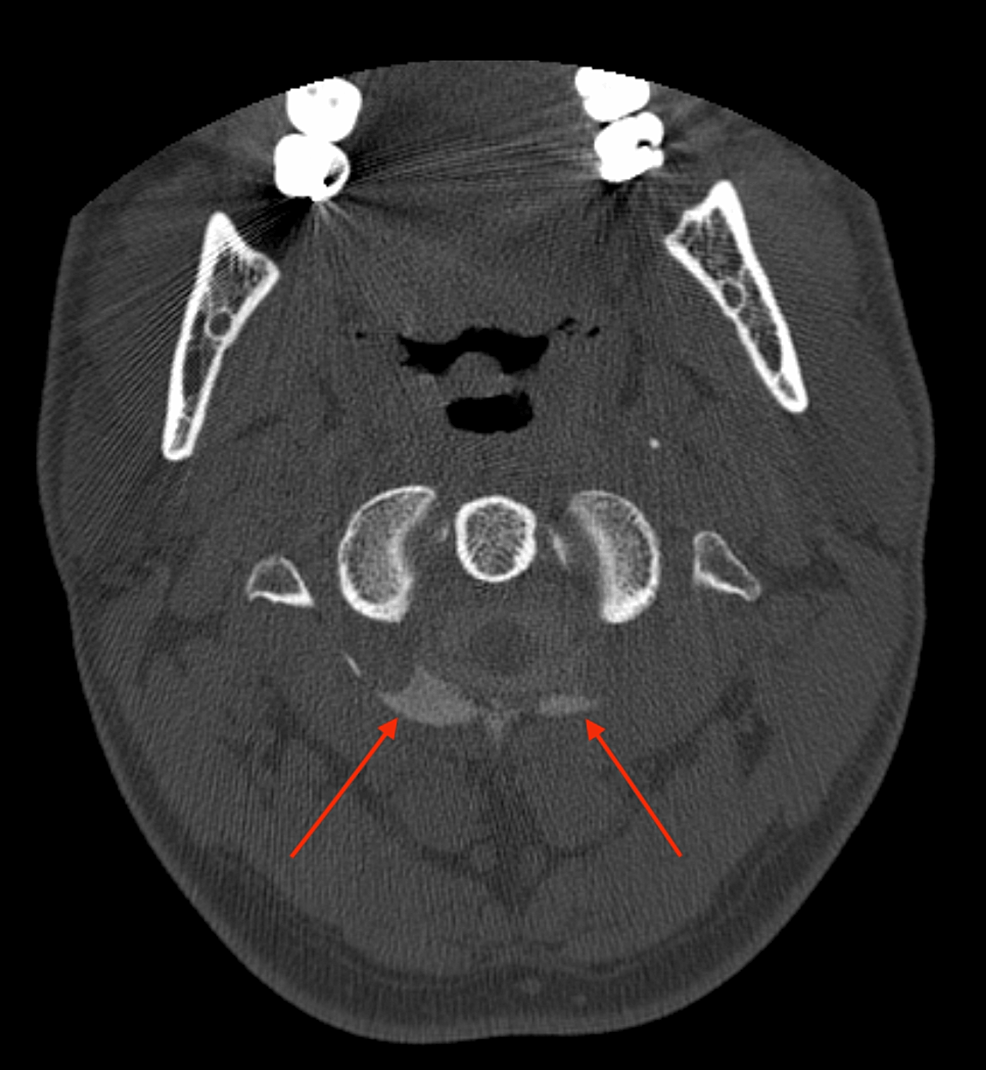 Spontaneous intracranial hypotension (SIH) is a neurological condition in which intracranial pressure is reduced due to the loss of cerebrospinal fluid from the cerebrospinal fluid reservoir, the spinal cord cavity, into the surrounding tissues. It is usually characterized by incapacitating headaches, phonophobia, nausea, and vomiting, is usually refractory to treatment, and requires further investigation.

We describe the case of a healthy young man who presented to the emergency room with postural headache accompanied by nausea, vomiting, and phonophobia. Computed tomography (CT) imaging of the brain was unremarkable, and he initially received symptomatic treatment. Due to persistent pain despite treatment, additional imaging studies were performed, including a bone marrow CT scan, leading to the diagnosis of multilevel cerebrospinal fluid fistula. To treat the underlying cause, an initial epidural blood patch (EBP) was first performed on his C7-T1, where he used 20 mL of autologous blood, but was completely symptomatic. No mitigation was achieved. A few months later, his second EBP was performed at C6-C7 at a higher volume (30 mL), but as with his first EBP, this procedure also resulted in complete headache and associated symptoms. never resolved. With no surgical indications from orthopedics and neurosurgery and persistent symptoms, his third EBP was performed. This time at the lumbar level (L2-L3) he injected 60 mL of blood to reach the upper dorsal and cervical epidural space. This improved the symptoms and allowed the patient to perform normal activities with only residual pain.

The need for repeated procedures is one of the pitfalls of blood patch technology. If possible, it should be performed at the documented fistula level, but should always be performed with safety in mind and by an experienced hand, especially when cervical level is a concern. Consensus has not been reached regarding the amount of blood to be taken. However, patient-reported discomfort or pain should be considered a warning sign and treatment should be discontinued. Although not a complete solution, EBP can completely or partially resolve the symptoms of SIH without the need for surgical intervention.

Spontaneous intracranial hypotension (SIH) is a neurological disorder with an estimated annual incidence of 5 per 100,000 and characterized by postural headache with phonophobia, nausea, vomiting, and malaise. . [1,2]Postural headache, excessive exertion, or severe coughing after cranial trauma should raise suspicion of SIH. [1]Treatment with conservative measures such as rest, hydration, caffeine, and common analgesics are often short-lasting and ultimately ineffective. [3]Because cervical fistulae are frequently undocumented, data on their treatment are scarce and their efficacy remains highly controversial. [2].

This case report contributes to current knowledge regarding more invasive strategies as treatment options for SIH, as there are very few cases in the literature describing cervical-level approaches.

We present the case of a 34-year-old, physically active, previously healthy American Society of Anesthesiologists (ASA) I, Caucasian man who presented to the ER with a 2-month history of persistent postural headache that began while surfing. To do. The day before his symptoms started, he was doing his usual exercises on the trampoline. The pain was contractile, non-pulsatile, on a numerical scale he scored 10 out of 10, was located in the back of the head, and radiated to both parietal regions. He settled down on his back. Accompanying symptoms were nausea, vomiting, and phonophobia. He explained that pain is an obstacle to activities of daily living.

Blood tests and computed tomography (CT) scans of the brain were unremarkable, and the patient was sent home on pain medication. After his symptoms persisted for 2 months despite treatment, a cerebrospinal fluid (CSF) fistula was suspected and axial magnetic resonance imaging (MRI) was performed. MRI showed multiple cervical dorsal collections of epidural CFS and a possible dural continuity solution at the T2-T3 level.

An epidural blood patch (EBP) was performed at the C7-T1 level in the patient in the right recumbent position (RLR). Using the loss-of-resistance technique, 20 mL of autologous blood was injected using an 18G Tuohy needle with the bevel facing the patient’s right side. The patient was discharged with partial resolution of symptoms, Also Lightheadedness.

After 3 months of symptoms, a bone marrow CT scan with radiographically opaque dye injection into the subarachnoid space showed five cervical CSF fistulae, C1-C2, bilaterally (Fig. 1 and figure 2), C2-C3 right (Fig. 3), C3-C4 left and C4-C5 right (Fig. Four). A second cervical EBP was performed by injecting 30 mL of autologous blood at the cranial-facing bevel he was at the C6–C7 level. A clinically significant improvement was seen on the first day after the procedure, and the patient described a reduction in the severity of her headache, which worsened especially in the morning and is now independent of body position, with light effort.

shape
1: MyeloCT of the axial C1-C2 level showing bilateral contrast (red arrows) outside the subarachnoid space as evidence of the C1-C2 CSF fistula. 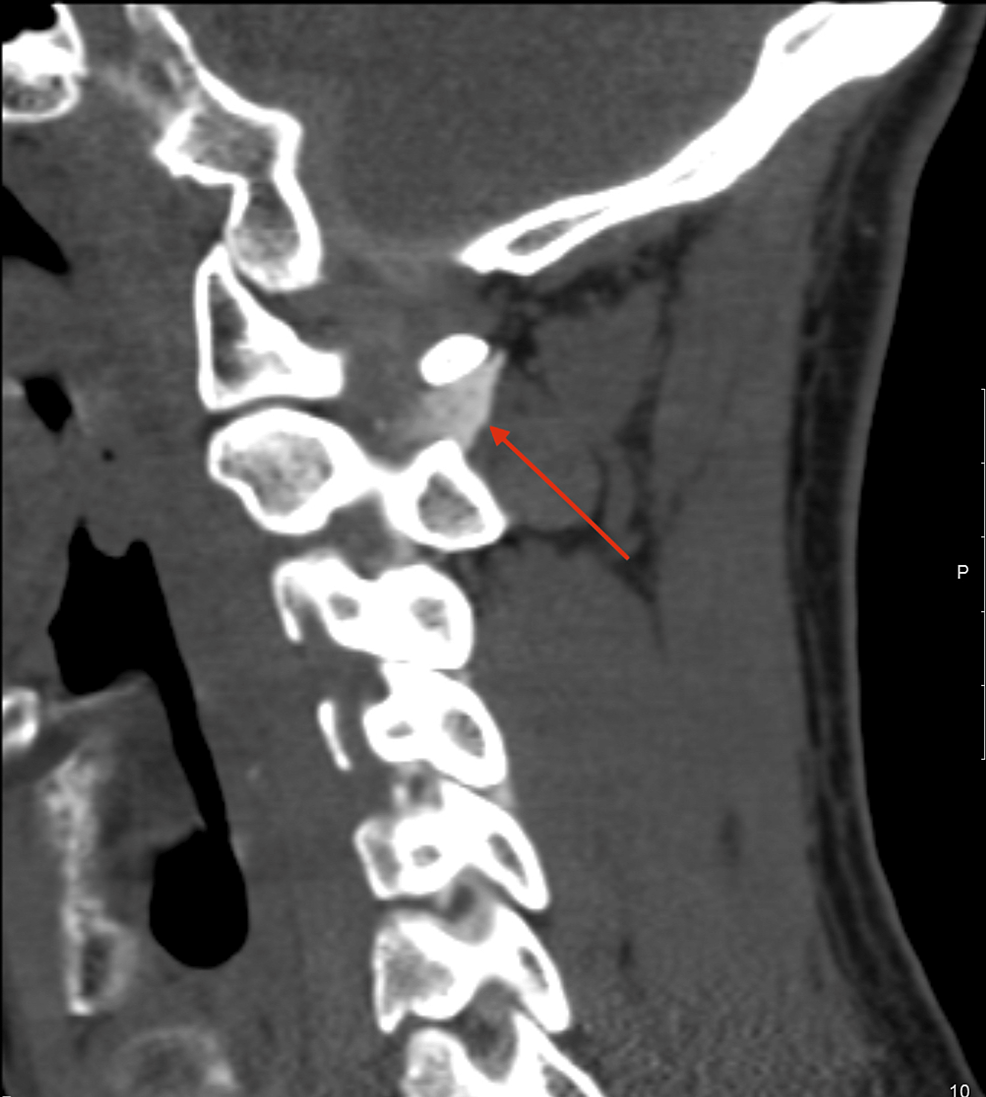 shape
2: Parasagittal neck myeloCT showing contrast lateral to the subarachnoid space as evidence of a C1-C2 CSF fistula on the right side (red arrow). 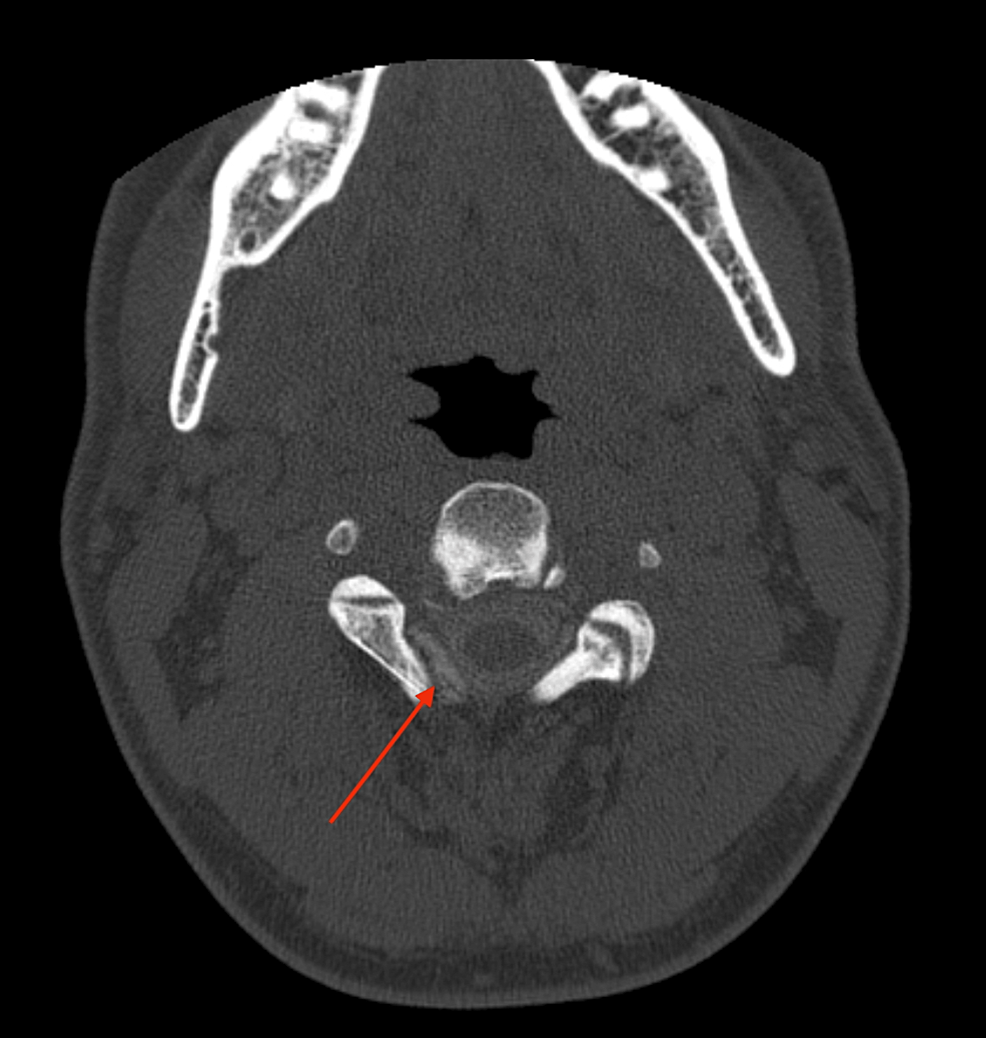 shape
3: MyeloCT of the axial C2-C3 level showing contrast outside the subarachnoid space (red arrows) as evidence of the C2-C3 CSF fistula on the right side. 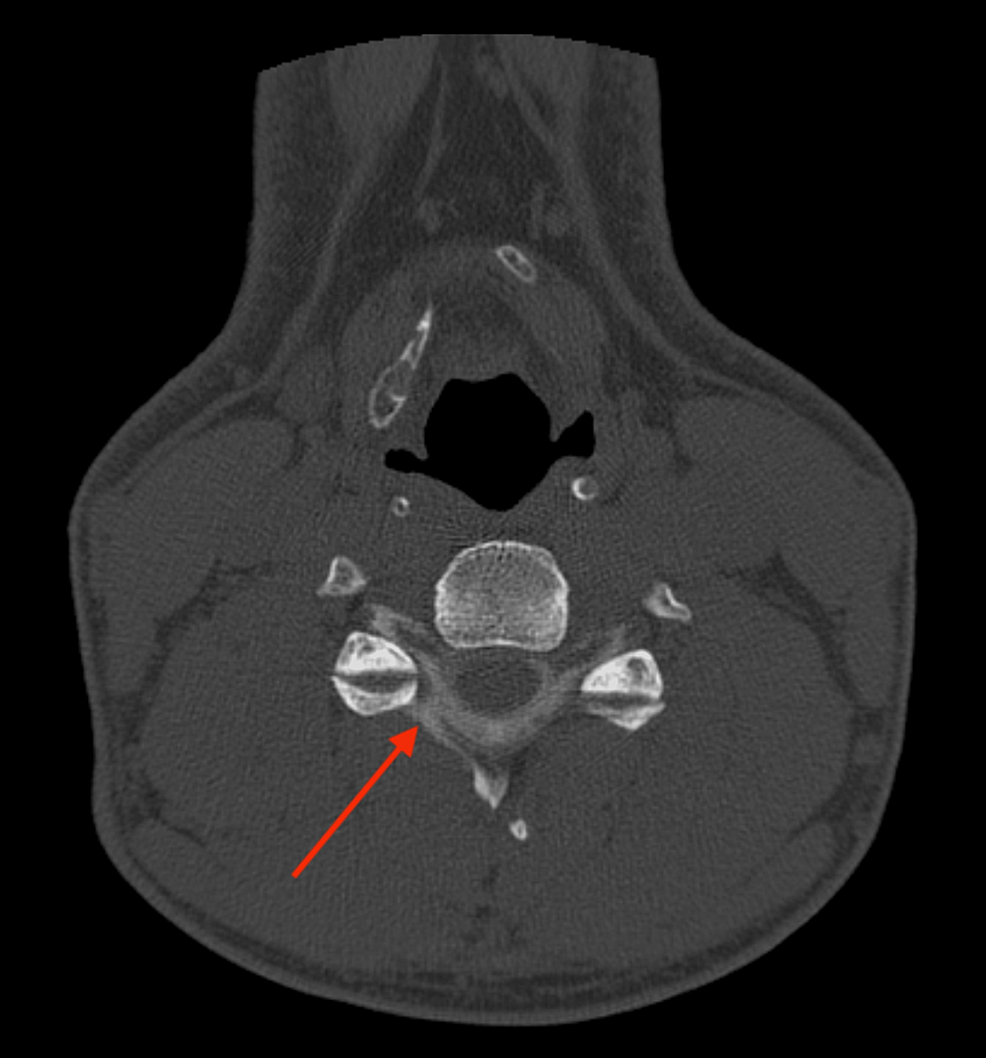 shape
4: MyeloCT of the axial C4-C5 level showing contrast outside the subarachnoid space (red arrows) as evidence of the C4-C5 CSF fistula on the right side.

He was referred to a neurologist and started on gabapentin and amitriptyline, but his symptoms did not improve. After discussion with orthopedic and neurosurgery, there were no surgical indications for him.

Two months later, a third EBP was performed, this time at the lumbar level L2-L3, and the patient used the RLR in Trendelenburg position at 15 degrees. The bevel was upward to obtain cranial dispersion. Loss of resistance technique, injecting 60 mL of autologous blood, achieved only partial improvement.

All three blood patches were safely performed and had no adverse effects other than complaints of pressure at the injection site.

Since then, the patient began practicing yoga and receiving symptom-relieving massages. or exacerbated by physical strain (8 out of 10). There is bilateral occipitotemporal irradiation and is also associated with photophobia. Nausea and vomiting subsided. Of interest is the relationship between flares and duration of reduced water intake. When the pain is at its worst, patients self-medicate with paracetamol, which greatly improves their symptoms.

Blood patch has been described as an effective treatment for orthostatic humoral hypotension in the context of cervical CSF fistula, but this clinical case demonstrates that the procedure was performed at different vertebral levels to achieve symptomatic relief. indicates the possibility of repeatingsymptomatic [4]More invasive techniques such as surgery may be required in neuroimaging fistulae.

One of the main risks of this blood patch procedure is that it can puncture the dura to reach the subarachnoid space and damage structures within it. As you know, in adults the spinal cord ends at the beginning of the lumbar vertebrae. Needle punctures below this level are safer as only the cauda equina is present in the subarachnoid space. In this particular case, the first approach may have been lumbar EBP, which was easier to perform, but given the documented location of the fistula, the cervical approach was preferred. Here, the epidural space is much narrower than the lumbar level, so the injection volume should be correspondingly less.

This raises an important question: What is the appropriate amount of blood to inject? The answer has to take into consideration several factors: injection site level, injection rate, and tolerability. Several case reports describe small volumes (5–8 mL) for cervical approaches. [4] All without major safety concerns compared to our cervical blood patch volumes (20 and 30 mL). The blood volume may vary depending on the infusion rate. This is because the slow and steady procedure allows the epidural space to be gently widened without major symptoms. These are dependent on EBP levels and may include compression of the spine, numbness in certain areas (arms, legs) and even acute pain. All of these are considered warning signs and prompt the question of whether to continue or stop the procedure.

Patient positioning may also be a variable to consider. Nevertheless, comfort and proficiency of the operator are very important, as unfamiliar needle movements take different directions in the supine and recumbent positions. This proficiency assumption also applies to the identification of the epidural space, either through loss of resistance or the hanging-her-drop technique. In our case, the operator’s experience favored the patient in the lateral decubitus position and the loss-of-resistance technique.

The discussion should also include the type of liquid being injected. Today, the technique is most commonly performed by infusing fresh autologous whole blood taken from the patient at the same time as the procedure, although some advocate the use of platelet-rich plasma (PRP).Heals damaged tissue with cerebrospinal fluid fistula [5]Both options work by two different mechanisms. The first and most immediate mechanism is that increased pressure in the epidural space is transmitted to the subarachnoid space, preventing intrathecal hypotension and thus achieving rapid symptom reliving. A second long-term mechanism, clotting factors present in both whole blood and PRP, creates a seal that prevents CSF from exiting the subarachnoid space, maintaining epidural integrity. Other options to consider include continuous epidural saline injections, fibrin glue, and ultimately surgical repair.

Our report shows that, although not entirely successful, careful and timely spaced procedures were able to improve patient quality of life. The approach taken was of paramount importance. EBP is typically performed in an obstetric setting at the lumbar level. Cervical EBP is an uncommon technique, mainly due to potential neurological complications. Side effects can be minimized if several precautions are taken into account, such as spinal level, blood volume, patient positioning, and technique in locating the epidural space. That said, it appears to be a safe procedure in skilled hands.

Given the issues surrounding multiple variables in administering EBP, its formal indications, indications for multilevel approaches, time between procedures, ideal amount of blood to be infused, best blood products, and More studies are needed to assess overall effectiveness and effectiveness.