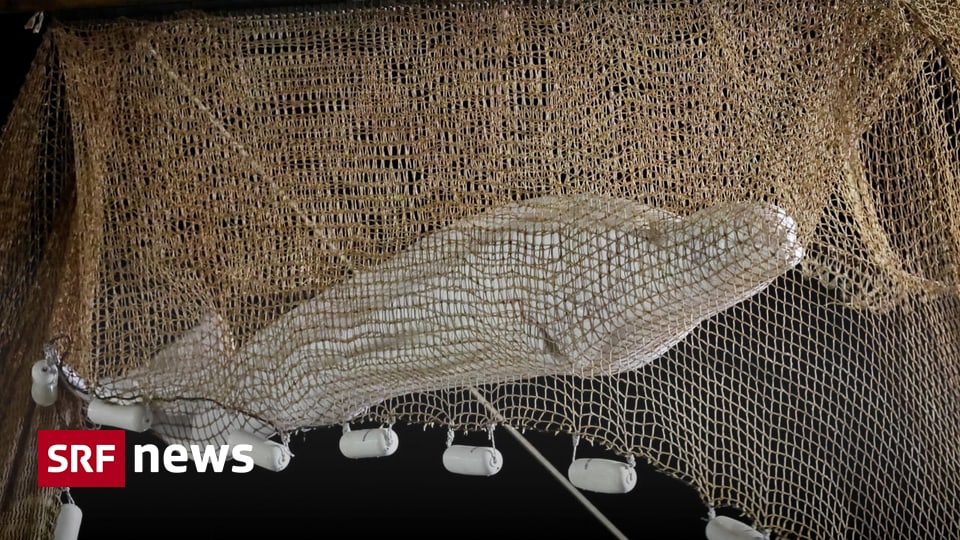 “During the trip to the coast, the vets noticed that his condition was deteriorating – particularly his breathing,” Florence Ollivet-Courtois, the official veterinarian, told the media.

They didn’t want to let the whale suffer, so they put it to sleep. The Calvados Prefecture announced the death of the animal on Twitter.

The marine mammal, four meters long and weighing around 800 kilograms, was lifted in a net using a crane from the lock in the northern French municipality of Saint-Pierre-la-Garenne around four o’clock on Wednesday morning, as reported by journalists from the AFP news agency on site. About 80 people were involved in the operation, including around 20 divers.

A first examination confirmed the poor condition of the emaciated whale. Veterinarians therefore considered his chances of survival to be low.

Nevertheless, the rescuers loaded the whale into a refrigerated truck, where it was kept wet with towels. He was to be taken to Ouistreham, Normandy, in a seawater tank.

The beluga whale was first spotted in the Seine on Tuesday last week. Since Friday he has been stuck in a lock in Saint-Pierre-La-Garenne around 70 kilometers from Paris – 130 kilometers from the Seine estuary on the English Channel.

According to experts, the animal cannot survive long in warm fresh water. Beluga whales typically live in arctic waters off the coasts of Russia, Alaska, and Canada.

See also  Training, reflexes: the advice of a specialist to manage an aggressive animal

Animal rights activists therefore developed the idea of ​​pulling the marine mammal out of the river and transporting it to a seawater tank in order to feed it up and then release it in the sea.

The interest and willingness to donate in France was huge. Among other things, the marine protection organization Sea Shepherd had collected donations for the rescue operation.

In the past few days, several attempts to feed the emaciated and weakened animal had been unsuccessful. According to experts, his lack of appetite could have been a sign of illness.

What will happen to the whale is still open. It is not known why the animal got lost in the Seine.

According to experts, this is only the second time that a beluga has lost its way to France. A fisherman first saw one in his nets in 1948 in the Loire Estuary.

In May, an orca got lost in the Seine. After weeks of odyssey in the river, the animal finally starved to death. In July, a fin whale was believed to have been sighted in the river estuary near Le Havre.