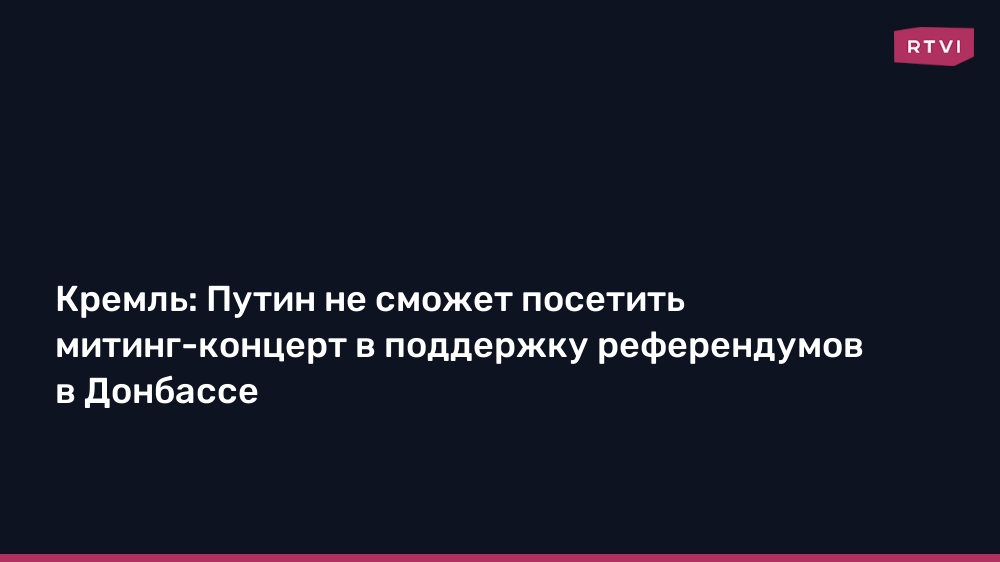 Russian President Vladimir Putin will not be able to attend a rally-concert in support of referendums in the territories of Ukraine controlled by the Russian army, press secretary of the head of state Dmitry Peskov said. The event will take place on September 23 in Moscow. According to Peskov, the head of state will work in the Kremlin at that time, RIA Novosti reports.

“No, the president will work in the Kremlin, he has a whole series of meetings, he, unfortunately, will not be able to,” the Kremlin spokesman told reporters.

According to Peskov, Putin plans to hold a meeting with the permanent members of the Security Council in the middle of the day.

On September 23, a concert-rally under the slogan “We do not abandon our own” will take place on Manezhnaya Square in Moscow. The organizer of the event is the All-Russian Popular Front (ONF), the Moscow City News Agency reported. The rally is timed to coincide with the holding of referendums on the accession to Russia of the regions of Ukraine controlled by the Russian military: the Donetsk and Luhansk People’s Republics (DPR and LPR), as well as the Zaporozhye and Kherson regions. Yulia Chicherina, Alexander Sklyar, Shaman and Vladimir Mashkov are expected to perform at the event.

At the same time, rallies and concerts in support of referendums in Donbass are planned to be held in other Russian regions.

Referendums on the accession to Russia of the DPR, LPR, as well as the Kherson and Zaporozhye regions, started on September 23. Voting will last five days, until September 27 inclusive.

Read more about the consequences of the annexation of Ukrainian regions to Russia, Moscow’s possible reaction to Ukraine’s attempts to return them, and the prospect of recognition of territorial acquisitions by other countries in the RTVI material.