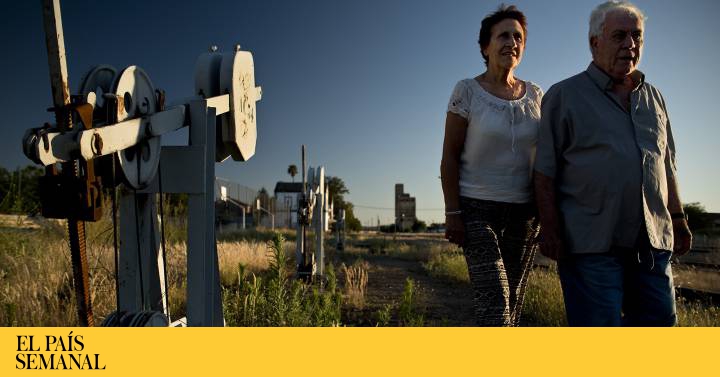 A setting sun casts oblique rays over the village of Algodor. In this spur of the territory of Madrid that bites the province of Toledo, a solitary building made in Neomudéjar style rises over the greenish reddish plain. The old train station with its arched windows was erected in 1929 to replace an older and humble building.

The pillars still show the acronym MZA, for the railway company that built it. The railroad tracks, rusted and covered with weeds, are bordered by two rows of low houses, about 60 in total. An old engine rests asleep on a liner, still coupled to two dozen freight cars. The deep calm of this place is almost disturbing.

In 2005, that silence fell on Algodor. That is the year that trains stopped passing on their way to Madrid, after having done so for almost a century and a half. In 2005, a new high-speed AVE link between Madrid and Toledo was inaugurated, making the Algodor station and the surrounding city obsolete.

“It was a small place but very lively. Algodor represents the happiness of my childhood years, ”recalls Pepe Rodríguez, the son of a railway worker who moved here with his family from Toledo in 1946, when he was two years old. “We have been fighting with the authorities in Aranjuez for more than 15 years [which Algodor is administratively a part of] and with Adif [the national railway infrastructure administrator]: we don’t have drinking water, there’s no phone line … they left us on our own devices. “

But the decline really began in the 1950s, when economic development brought new technologies. In the 1970s, steam engines disappeared, leaving many workers out of work. The high-speed rail and an improved road network did the rest.

Like the other 50 railway cities that exist in Spain, Algodor was not built on a previous settlement, but was founded from nothing, to cover the needs created by a mode of transport that embodied the industrial revolution of 1800. Beginning in 1860, workers from all over Spain began moving to these new cities, where their children were born. Railway workers were nomads, and trade was often transmitted from generation to generation.

“Those first settlers were like Martians, or paratroopers who landed in a territory that had nothing to do with them, ”explains Miguel Jiménez, who is in charge of historical heritage and rail tourism at the Spanish railway foundation Fundación de los Ferrocarriles Españoles. Jiménez, who is also co-author of a definitive book on the subject. – History of railway villages in Spain, or History of railway cities in Spain – He says that what was once arid land was transformed into miniature cities with schools, a grocery store, a doctor, a church, a tavern, bars and even cinemas.

But this way of life began to die slowly as Spain experienced a rapid social transformation in the twentieth century.Entury Like Algodor, most of the country’s rail cities are in decline, and its remaining residents face an uncertain future.

Maribel Uría, 56, was born in Algodor and is the only native resident left in the city. She, like everyone else, rents her house from Adif, the homeowner. Some of their neighbors are descendants of the original workers, and have preferential access to low-rent houses. Others are strangers who came attracted by good prices. “We were used to the noise and it didn’t bother us,” Uría recalls about the days gone by when trains came and went 24 hours a day. “Now I have become accustomed to silence.”

Before the creation of the national railway company Renfe in 1941, there were several private groups operating throughout the Spanish territory: MZA, West, North, Andalusian Railways and more. They were the ones who created these railway cities, with the same protective zeal of a father who takes care of his children: protective but authoritarian at the same time. The company thought of everything. The first and precarious housing arrangements (the first to arrive lived in shacks or in train cars) gave way to appropriate homes. The company also paid for the general store and medical services, although there was still room for some private commercial initiatives.

In Almorchón, a railway city in the western province of Badajoz, Mari Loli Sánchez still lives in the same house where her father and grandfather once worked as butchers. On this same street, there used to be a couple of inns and tables on the sidewalk where the locals gathered to have a drink at night. That was in the 1960s, when the population of Almorchón exceeded 1,200. These days it is 45. “This was a connection point for trains going to Córdoba, Madrid and Badajoz; it was a hive of activity, ”recalls Clemencia Muñoz Seco, another local resident, who has helped create the Almorchón Neighborhood Neighbors Association to preserve the town’s legacy. “It’s not about obsessing about what it used to be, but about thinking about what it could be,” says Mari Loli.

One of Adif’s tasks is to manage the assets Renfe inherited from private rail companies. These assets include residential properties, pavilions, train stations and buildings that once housed schools and medical practices. Many of them are on the verge of collapse. In large cities, such as the Vicálvaro neighborhood of Madrid, most of the property was sold years ago. “They are old buildings, where we did all the maintenance we could,” says José Luis García Montón, who is in charge of Adif’s rail heritage in Madrid. “That is why they are not offered at market values.”

Residents of several railway cities who were interviewed for this story said they pay between 100 and 200 euros a month in rent. This has attracted people like Irene Muñoz, a 34-year-old girl from Toledo who rents part of what was once the house of the stationmaster in Algodor. Muñoz, who lives there with his partner and daughter, knows that they will never have the option to buy the property even though they paid for the necessary renovations from their own pockets.

In addition to serving as a holiday destination, some people have even built pools, the main activity here these days is photography: people come here on weekends through the evocative landscape, and some even take pictures of their wedding at this context Adif has also rented several properties, particularly the station, for film shoots. Pedro Almodóvar Juliet He was partially shot here, for example. And finally, there are the explorers and history buffs that come to the Civil War bunkers (1936-1939) scattered throughout the area.

During those bloody years, a bomb shattered the school of a railway city in the province of Cáceres that today is known as Monfragüe, but was originally founded as Plasencia-Empalme and then renamed Palazuelo-Empalme. Seven children and two adults died in the explosion, and a nearby house still shows shrapnel marks embedded in its walls. There are no more than 10 residents here in the winter, but local parties still take place every year and attract about 125 people. Many are former residents who come to catch up with old friends. “We celebrated a dance, a raffle and a mass. Later we eat at the camp,” explains Victor Macías, 70, who used to work as a train engineer. “We do it mostly so we can see each other again.”

The life of a railway worker was hard, everyone agrees. The children played near the slopes while their parents performed their duties as engineers, directors and firefighters. And even though everyone was used to coming and going from railroad cars, occasionally tragedy struck. Soledad, the daughter of the local doctor in Monfragüe, still trembles when she remembers how she once saw a man decapitated by a passing train.

But at a time of economic difficulties throughout Spain, these workers were guaranteed a fixed salary every month. And that was no small thing. Many residents of the railway city still use the saying: “Hunger passes through the door of the railroad man, but does not enter.”

Railroad workers were also unionized and well organized, and occasionally faced the Franco regime. On July 19, 1936, just after the uprising that led to the Civil War and the subsequent dictatorship, many railway workers organized a spontaneous strike at the Arroyo-Malpartida (Cáceres) station. More than one did not live to tell. Later, Mussolini’s troops showed up to control rail traffic to Portugal, and a soldier stayed behind, and finally opened a bar called Italy.

“During the Civil War, these places played a strategic role. They were military targets, and then they became a form of punishment, “says Francisco Polo, director of the Madrid Railway Museum and author of a book on the subject. Around 83,000 railway workers were attacked during the postwar years.” More than 7,000 were dismissed, and 13,000 or 14,000 were sanctioned. A very common sanction was to send them to these villages. “

These days, the remaining residents have been building partnerships to preserve their legacy and find new uses for surviving infrastructure. Many say that empty buildings could be used as residences for the elderly, cultural centers and hotels. Others crave a local railway museum like those that already exist in Almorchón or Las Matas in Madrid. And most complain of feeling abandoned by Adif.

The company says it is doing everything possible and that the future of these properties depends not only on Adif, but also on several government agencies. “Our goal is to sell the old properties, which we are restoring as much as we can,” says Fernando Gomez of Adif. “But in addition to a physical restoration, they also need legal reform.” Since 2000, the Ministry of Culture has been working on a National Plan for Industrial Heritage to provide some legal protection to these sites. In 2004, paperwork began declaring Monfragüe a cultural asset, but no practical measures were taken and the town is falling apart.

Antonio Salomón, 83, is a former Arroyo-Malpartida engineer who still retains his old uniform and cap, along with other items he once used at work. For many years he drove the train to Madrid’s Delicias station, and they often brought coffee that had been smuggled from Portugal, he confesses with a smile. Solomon says he was never happier than when he spent time in his town.

Oil remains stable to relieve tensions between the US. UU. And...

Wade enters the planning of the World Cup, Stoinis on hold

The participation of women in the positions of the US corporate...

Gerber launches nationwide search for its next spokesperson

Two pedestrians hit by a police car in a fatal Launceston...