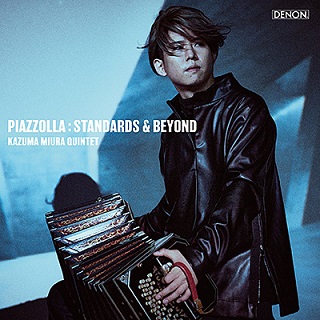 [Bonus]First-come, first-served: postcard
* Ends as soon as the benefits expire
The final hit of the Piasolayer is here!Under Kazuma Miura, virtuosos of each instrument gather to connect the spirit of Piazzolla to a new era.

The 100th anniversary of Piazzolla’s birth in 2021, and the 30th anniversary of his death in 2022. At the end of two years of Piazzolla, an album that will be the best gift for Piazzolla fans was born.
In 2008, under the tutelage of Nestor Marconi, the master of the bandoneon, who descended from Piazzolla, Kazuma Miura won second place at the 33rd Astor Piazzolla International Competition, becoming the first Japanese and the youngest ever to do so. While pursuing Piazzolla’s music in various formations, he has also studied classical performance techniques such as Bach, and has pursued Piazzolla’s expression in modern concert halls.
Among them, the core organization is “Quinteto”, which was also the center of Piazzolla. These are the allies we have built up.
After researching Piazzolla’s original scores and recordings that remain, and through repeated trial and error, such as the balance of each instrument, in order to best convey the world of Piazzolla in a modern concert hall, we have worked out and elaborated while respecting the originals as much as possible. The repertoire is enormous.
The recording of this time is an album that can be said to be a new standard, suitable for the end of Piazzollaer, combining masterpieces that can be said to be standards, and works that contain innovative elements of Piazzolla and that we would like to see more performances from now on. .
（Columbia）