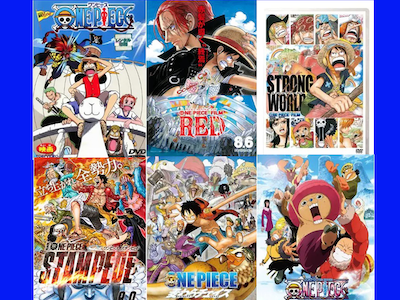 Popular TV anime series “One Piece”. The original is a shonen manga of the same name by Eiichiro Oda, which is being serialized in Weekly Shonen Jump. From the first movie version “ONE PIECE One Piece” released in 1998, we will introduce all 15 works including the latest “ONE PIECE FILM RED” released on Saturday, August 6, 2022. !

While sailing, Luffy, Zoro, Nami, and Usopp are attacked by the pirate El Drago in search of treasure. She manages to escape and rescues Tobio, a boy who was being held captive by El Drago. Luffy and his friends head to the Golden Island to meet Tobio’s admirer, Woonan, but they are once again confronted with the pirate L-Drago.

This is the story of when Sanji had not yet joined and the Straw Hat Pirates had four members. The scale is not that big in 50 minutes, so you can watch it at a good tempo. The first theatrical version that people who read from the beginning and those who watched the anime will feel nostalgic. 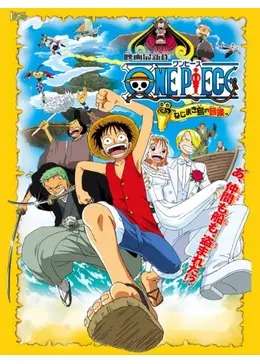 There are more battle scenes than the previous work, and the highlight is the heated battle between the five Trump pirate brothers and Luffy. 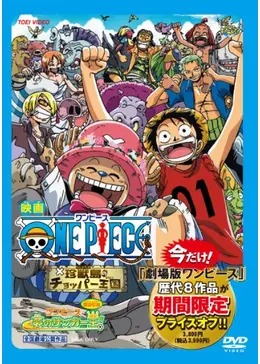 In order to find Chopper, who was blown away by the eruption of an undersea volcano, Luffy and his friends set foot on an animal island full of rare animals. While Chopper reigns as the animal king, Count Butler’s gang, who are looking for treasure, attack the animals.

A work where you can enjoy the charm of Chopper, who has just joined the Straw Hat Pirates and grows to protect his friends. 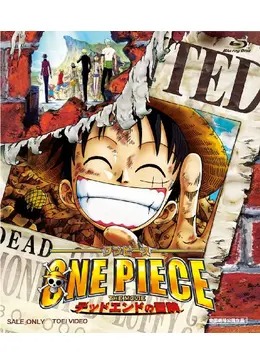 The Straw Hat Crew landed in the port town of Hannabal. The “Dead End”, a dangerous race of the century where great pirates compete, was about to be held there. While confronting various strong people, Luffy and his friends advance through a harsh dead-end race.

The first feature-length film in ONE PIECE history. The setting of ONE PIECE is also drawn, so even beginners can enjoy it. The theme song of BUMP OF CHICKEN also attracted attention. 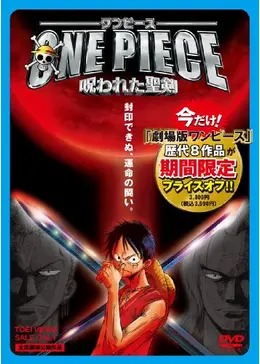 Zoro disappeared on the island he landed on to procure food. When I found him, for some reason he was acting with a navy swordsman. While investigating what happened to Zoro, the legend of the island’s sword is revealed.

Zoro’s boy swordsman days are told, and Zoro fans are a must-see. 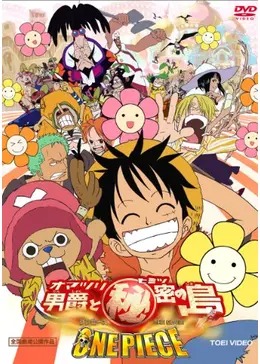 During the voyage, pick up a map of the paradise-like island “Omatsuri Island”. When he arrives on the island, he undergoes a hellish trial by the island’s head, Baron Omatsuri. At first, it was a fun trial like a festival, but eventually his friends were dismembered, and Luffy fought desperately to save his friends even though he was seriously injured.

Directed by Mamoru Hosoda such as “Summer Wars”. Depicts the bonds with his friends while including beautiful images unique to Mamoru Hosoda’s work and sometimes dark visual expressions. Recommended for those who want to see a different ONE PIECE. 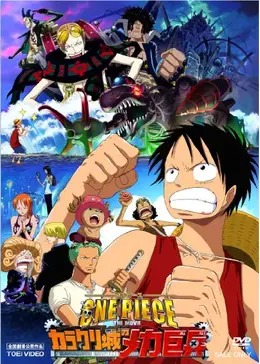 Rescue an old woman with golden dentures from a pirate ship on the verge of sinking. She promised to receive the legendary treasure of Mecha Island in exchange for delivering her to the island, but she was not allowed to land on the island and received a rough welcome. Reluctantly, Luffy and his friends go on a quest to find the island’s treasure.

The appearance of a karakuri castle, robots, and puzzle-solving to find treasure are all exciting works. 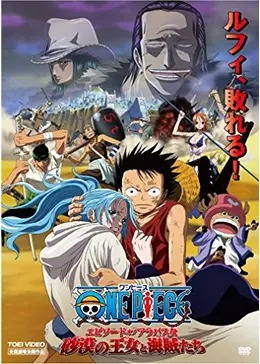 The desert country Alabasta was about to be destroyed by a secret organization by Crocodile. In order to save Alabasta from Crocodile’s plot, Princess Vivi and Luffy engage in a heated battle.

A theatrical remake of the still popular Alabasta arc. After all, the impression of the last scene does not fade. 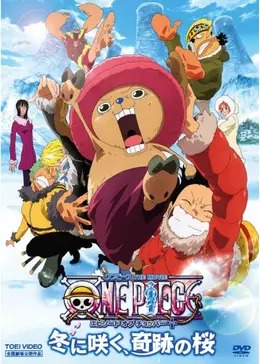 In order to treat Nami, who collapsed during the voyage, he arrives at Drum Kingdom and meets Chopper, a reindeer who is a doctor. Luffy and his friends want to join them, but Chopper, who ate the Hitohito fruit, had a past of being persecuted by both reindeer and humans, and did not open up to him.

Continuing from the previous work, the episode where the popular chopper in the original becomes a friend is made into a movie, including original elements. I can’t help but shed tears at Hiluluk’s convictions as a doctor, who was also Chopper’s father. 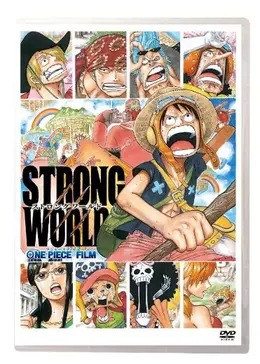 Nami was kidnapped by the legendary great pirate “Golden Lion” who suddenly appeared from the sky, and Luffy and his friends were scattered to an island inhabited by ferocious animals. A battle with legendary pirates begins to bring back his friends.

Original author Eiichiro Oda wrote a new story for Story Theater for the first time, and acted as executive producer. The scene where Luffy and the others board the enemy in order to rescue Nami is the coolest movie ever. 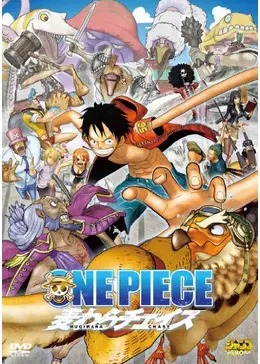 When Luffy wakes up one morning, he realizes that his straw hat, which is more important than his life, is gone. Search around the ship and you’ll find a giant eagle with a straw hat in its mouth. He and his companions steer into danger zones to catch the great eagle, while being hampered by naval forces and pirates.

The first 3D movie version. You can see it from a new perspective, including more powerful battle scenes and the movements of the characters. 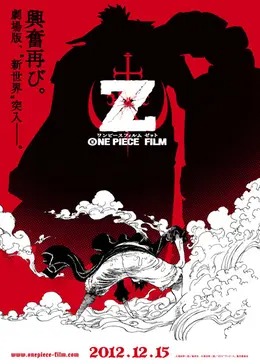 Luffy and his friends, who are sailing in the New World, come across a former naval admiral “Zet” who is plotting a plan to eliminate all pirates. Zed realizes that Luffy and the others are pirates, and uses his overwhelming power to destroy the Straw Hat Pirates. Before long, the Navy HQ and former Navy Admiral Aokiji and the others start moving, and an unprecedented battle unfolds.

See also  What does it mean that large carnivores appear frequently in many places across the country? Which animals appeared? With details! -Soil drift net

The Straw Hat Pirates landed in Gran Tesoro, the world’s largest entertainment city where pirates, marines, and millionaires gather from all over the world. Contrary to what I thought was a gorgeous world, behind the scenes, the Golden Emperor Guild Tesoro ruled over the people with a huge amount of money. A battle for Luffy’s beliefs begins against Tesoro, who tries to control the world with the power of money.

A work where you can fully enjoy the fun of the theatrical version, such as the gorgeous stage, costumes, and production. 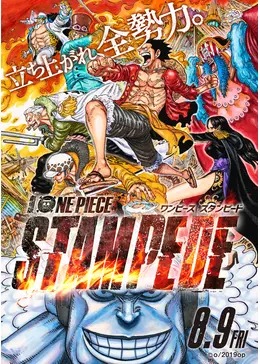 The Straw Hats have received an invitation to the Pirate Expo, the world’s largest festival for pirates, by pirates. A treasure scramble was about to unfold at the highlight of the Expo, “The Pirate King’s Treasure Hunt”. However, behind the scenes, the conspiracy of Festa, also known as the “worst warmaker”, the Navy’s undercover investigation, and the invasion of the former Roger Pirates, plunged into unpredictable chaos…

The most attractive point is that it is an all-star series with popular characters such as pirates, navy, King Shichibukai, Revolutionary Army, and past characters such as CP-0 and Crocodile. The joint front of Luffy and the pirates is also drawn, and there is no reason why this is not interesting anymore. 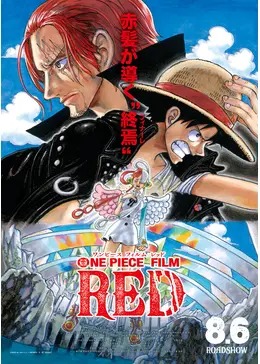 Uta, the most loved singer in the world. Her singing voice, which hides her identity, was described as “another dimension”. A live performance will be held where she will appear in front of her public for the first time. The colorful pirates, the navy’s gaze, and the Straw Hat Pirates led by Luffy, who have come to enjoy her singing voice without knowing anything about it. was. The story begins with the shocking fact that she is “Shanks’ daughter”.

“ONE PIECE” first anime work, “ONE PIECE Defeat! Goro Taniguchi, who was the director of Kaizoku Ganzac, is making a comeback as a director. The world’s attention is focused on the shocking fact that Red-Haired Shanks had a daughter. 19-year-old singer Ado is in charge of singing for Uta, the world’s most beloved singer.

*VOD distribution information as of August 5, 2022.