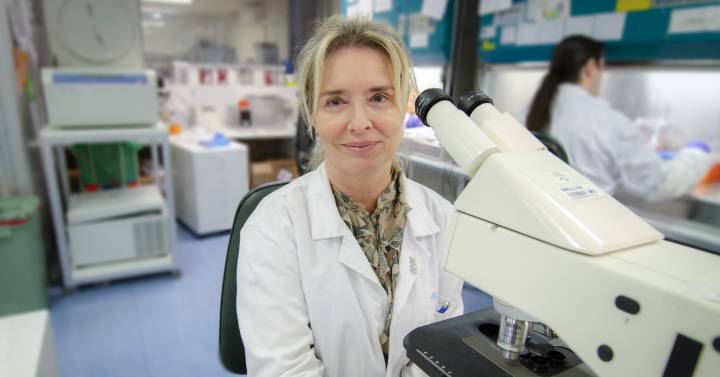 In 1992 María Ángeles Muñoz was in the middle of the perfect storm. A little-known virus was wreaking havoc in Madrid and other Spanish cities. Deaths increased every year without doctors doing much to prevent it. In 1995 almost 6,000 people died across the country. This doctor and biologist from Madrid remembers seeing children dying from a few years who had been infected by their mothers during pregnancy. They were the worst years of the global AIDS epidemic.

“In the hospital we had a specific unit for infected children. There were always 20 or 30 and at Reyes we organized a party for them. It was heartbreaking. Now at most two or three cases occur every year in all of Spain ”, explains Muñoz in a basement of the Gregorio Marañón Hospital in Madrid.

Behind it are huge metal vats and coolers that hold blood samples from more than 9,000 people at 120 degrees below zero. Muñoz has been collecting these tissues since 1992, when it was clear that it was necessary to create a kind of library that would accumulate the more cases of human immunodeficiency syndrome (HIV) the better, since it was the only way to understand the virus and seek treatments against it.

Today the Marañón biobank – one of the first created in Spain – is the only one in Europe specialized in HIV patients. Religiously, every six months blood samples have been collected from patients to follow their evolution and that of the virus. On the shelves of this library are whole lives. These include those of some babies who were born infected in 1994 and who today, thanks to the use of antiretroviral therapy, are in their twenties with an undetectable viral load. “It can be said that this bank saves lives because it helps to have quality samples so that there are quality results,” explains the scientist from Madrid.

One of Muñoz’s dreams is to have to eliminate the samples that he keeps because the AIDS epidemic has been eradicated and it is no longer necessary to keep them. He knows that it is an impossible dream, because despite the advances in Spain people are still dying of this disease and there are new infections. “The profile of the infected now is that of young people, mostly homosexual, who become infected on night outings after having sex with two or three people.”

Muñoz has seen the AIDS virus evolve before his eyes. “It has changed a lot and for the better, because it is now less aggressive,” he highlights. The biobank that this researcher directs since its official creation in 2004 has 12 cohorts of patients: adults and children, including the so-called “elite responders” who do not have a viral load and in whom there are hardly any copies of the virus left behind in the cells of the Body.

Currently, the biobank treasures blood of all kinds of patients and of any pathology. Every day samples are received from hospitals throughout Spain, almost 1,000 a year. The hospital itself is in charge of sending a special courier service to the origin that guarantees that the blood is conserved properly and fulfills its main objective: to investigate.

This library serves research groups from all over Spain and also Europe. Normally, a fee is charged for sending the samples, but in this the bank is also atypical: “We always provide service, we only ask that they pay if they can afford it,” says Muñoz, who in addition to running the repository has been investigating for decades the samples it collects and safeguards. Among her current projects is developing a gel based on nanoparticles that block the door through which the AIDS virus enters cells and that can be applied before sexual intercourse to avoid contagion. The researcher also projects the creation of organoids, microscopic replicas of any organ in the body obtained from stem cells. She wants to focus on creating a mini-brain where you could test “any type of drug.”

“The Gregorio Marañón biobank is the jewel in the crown, it allows for very serious studies that would otherwise be impossible for the benefit of clinical research and, therefore, the health of patients,” says Santiago Moreno, doctor and researcher. from the Ramón y Cajal hospital in Madrid.

The one in the Marañón is one of the 39 that make up the Spanish network of biobanks, which together add samples from almost 200,000 patients and allow any pathology to be investigated. These collections unite patients – whose personal data is confidential -, hospitals where samples are collected and research laboratories where they try to understand diseases and seek new treatments.

“The work we do has a direct impact on patients and is essential for the new era of precision medicine,” summarizes biologist Cristina Villena, coordinator of the network. “It is essential that the samples are of quality, that they be taken systematically. A sample that is collected in the operating room less than 30 minutes after surgery is not the same as another that is brought to you by the caretaker after five hours. And this heterogeneity is very bad for science, because in part it causes that around 50% of the research carried out with these samples is not reproducible. This means for example that a certain biomarker or a certain treatment does not reach the patients or takes longer to do so. Right now we are in a moment of professional specialization to guarantee that all the samples that are collected are of the highest quality ”, highlights Villena.

Some of the sample banks continue to experience real penalties for obtaining samples from patients and donations from deceased people, in part because many of these banks “sound like Chinese,” says Villena. “Hopefully at some point the donation to the biobank will be normalized, it will be as simple as who goes to the doctor. People have to think that their donation is for the benefit of those who come behind, whether healthy or sick, ”he adds.