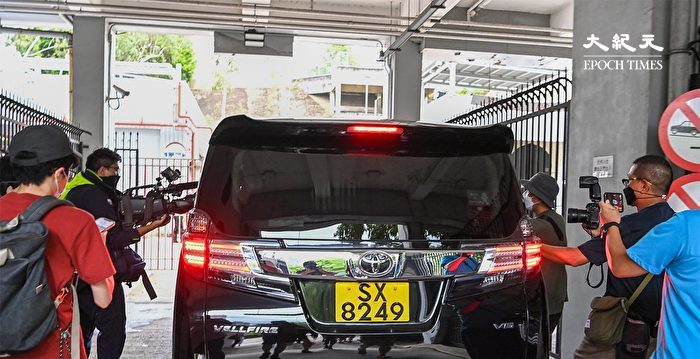 [Epoch Times, August 5, 2022](The Epoch Times reporters Ye Zeyu, Song Bilong, Dove Hong Kong reported) The big screen of the men’s group MIRROR concert in the red hall fell into a serious accident, and the police intervened in the investigation. Lu Tinghui, CEO of Makerville, the organizer of the MIRROR concert, took a black seven-passenger car to the West Kowloon Regional Police Headquarters at about 3:30 p.m. yesterday. It is reported that he went to the police station to assist in the investigation.

At around 9 o’clock yesterday morning, a number of EMSD officers took a white seven-passenger vehicle to the West Kowloon Regional Headquarters. It is unknown whether they would assist in the investigation. At about 11:30, a female dancer entered the police station in a private car.

At about 3:30 p.m., Lu Tinghui took a black seven-person vehicle to the West Kowloon Regional Police Headquarters. Another source said that concert producer Fran9 (Lin Haoyuan) and a dancer also assisted in the investigation and recorded statements at the same police station.

On the evening of July 28, during MIRROR’s 4th Red Hall concert, when Anson Lo (Lu Hanting) and Edan (Lu Juean) were performing “Elevator”, a huge screen hanging in the air suddenly fell down, and the two danced. Members Ah Mo (Li Qiyan) and Ah Feng (Zhang Zifeng) were injured and sent to the hospital. After the incident, Lu Tinghui visited the injured and bowed and apologized when meeting reporters, but has not appeared again since then.

See also  "Meeting of soloists": the concerts of the "Toti dal Monte" Music Association of Solighetto are back

Another source said that the police have handed over the seized wire rope and other parts to the government laboratory a few days ago, and the test results are expected to be available as soon as tomorrow. ◇