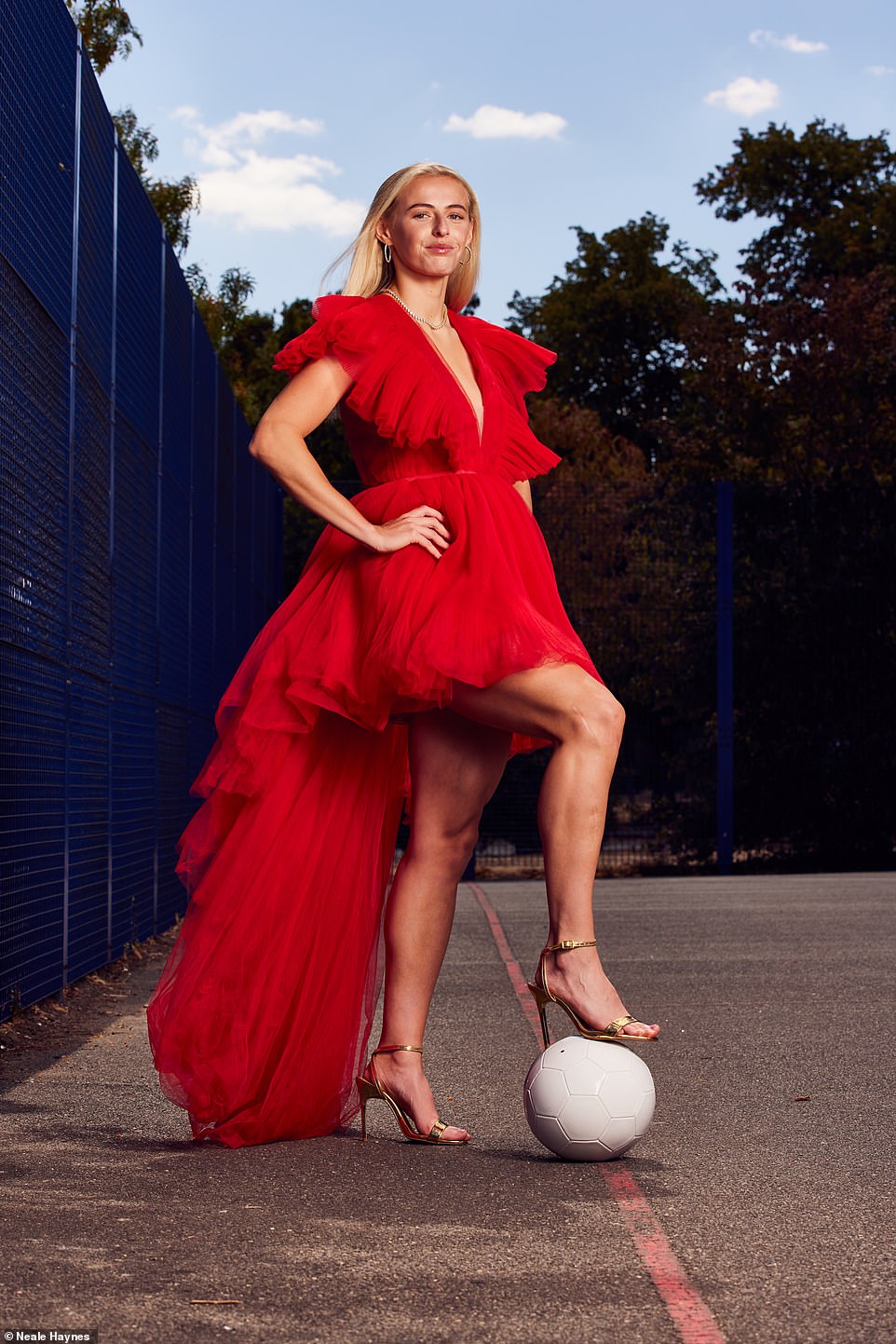 Chloe Kelly doesn’t have a clue what was going through her mind when she whipped off her shirt and ran across the pitch in her sports bra after her winning goal in the Euro 22 final.

‘It was a spontaneous gesture,’ she says. ‘I wasn’t thinking about [making a statement about] women’s empowerment. I was just celebrating the moment.’ It was, she adds, the best feeling.

‘I didn’t realise how big taking my top off would become and what it would do for women.’ A smile plays across her pretty face. ‘Or for the sales of sports bras, which have gone through the roof,’ she laughs.

Chloe is aglow with the sort of I’m-so-happy-I-could burst euphoria that endeared her to so many of us during the celebrations for the Lionesses’ historic 2-1 win against Germany on Sunday. Who could fail to be caught up in her joy when, midway through a post-match interview, she ran off, microphone in hand, to join the record-breaking crowd at Wembley singing Sweet Caroline?

On the ball: England forward Chloe Kelly – Chloe is aglow with the sort of I’m-so-happy-I-could burst euphoria that endeared her to so many of us during the celebrations for the Lionesses’ historic 2-1 win against Germany on Sunday 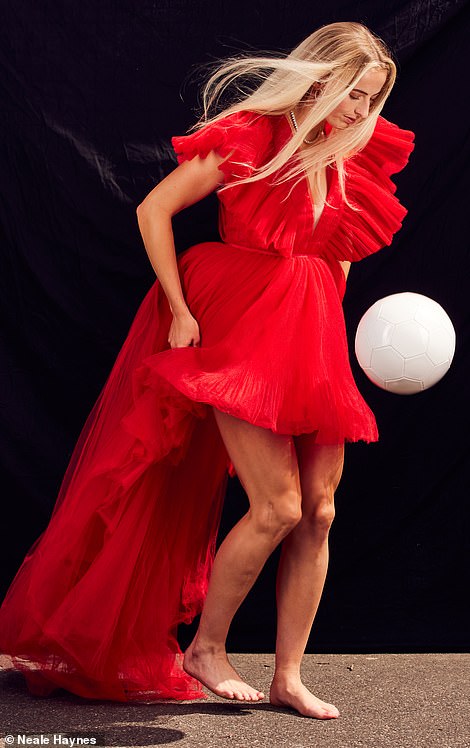 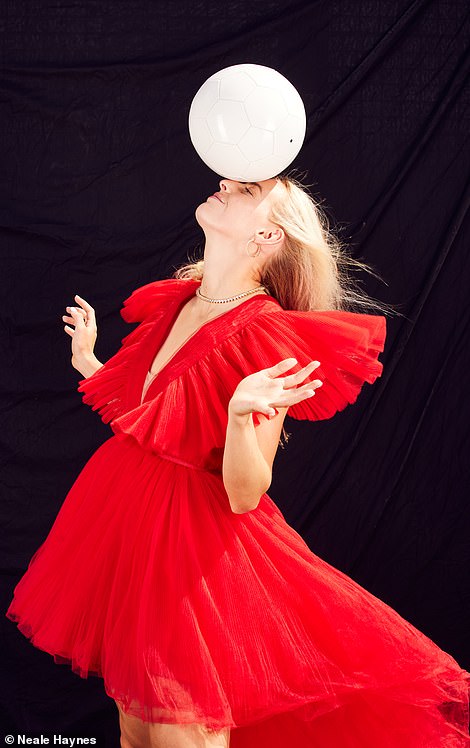 ‘When I came on [from the substitutes’ bench], all I was thinking was ‘make something happen. Make it count’. Hair: Desmond Grundy; Makeup: Amanda Clarke Via Joy Goodman; Styling by Dinah van Tulleken and Alice Hare 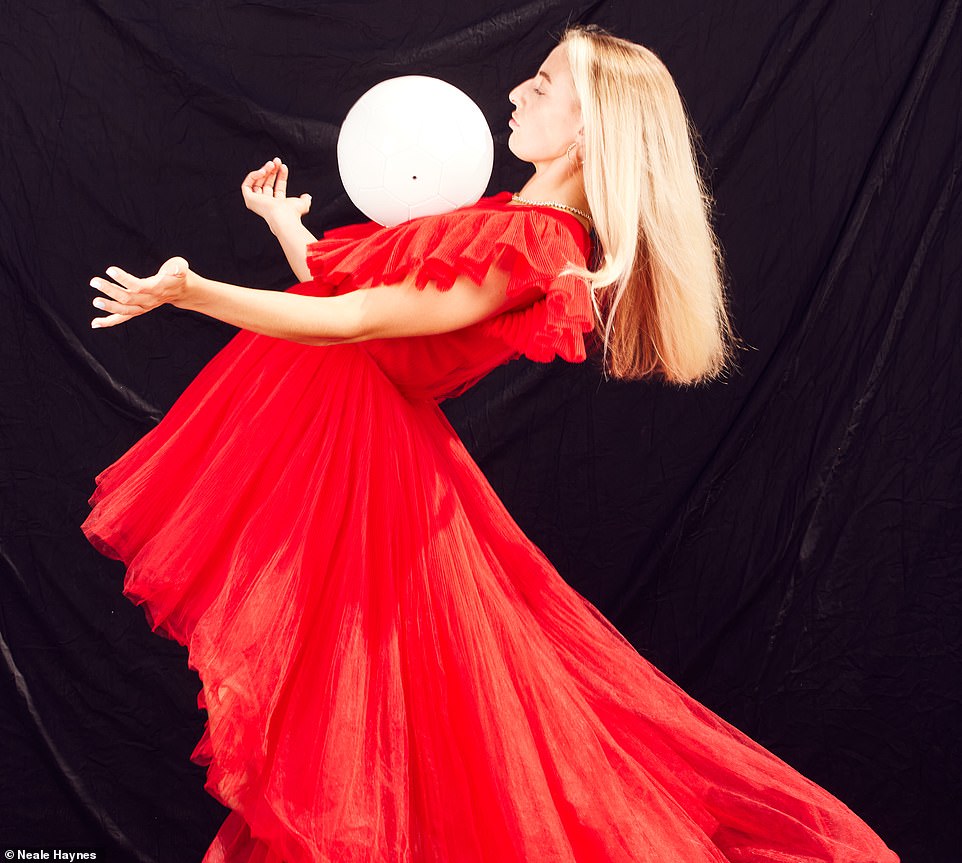 ‘Seeing the ball in the net was the best feeling, but I didn’t want to celebrate too much in case they ruled it out. I just had to get the confirmation and then celebrate’. Dress: Giambattista Valli x H&M Necklace and earrings: Heavenly London

Today, Chloe’s triumphant, unselfconscious goal celebration — in an age when women’s very existence is being denied by the woke brigade — is a lesson in emancipation that transcends the beautiful game.

For Chloe, a straight-talking, straightforward 24-year-old, was simply ‘being true to myself. I wasn’t thinking ‘am I allowed to take my shirt off?’

‘I was in that amazing moment, not questioning what anyone would say. I knew I’d get booked but it’s the best yellow card I’ve ever received’.

She adds: ‘When I came on [from the substitutes’ bench], all I was thinking was ‘make something happen. Make it count’.

‘Seeing the ball in the net was the best feeling, but I didn’t want to celebrate too much in case they ruled it out. I just had to get the confirmation and then celebrate.’

It is, in truth, a miracle of sorts that Chloe was on the pitch at Wembley at all on Sunday. Last year, she suffered a career-threatening anterior cruciate ligament (ACL) injury. For many months she couldn’t walk unaided — never mind play football. 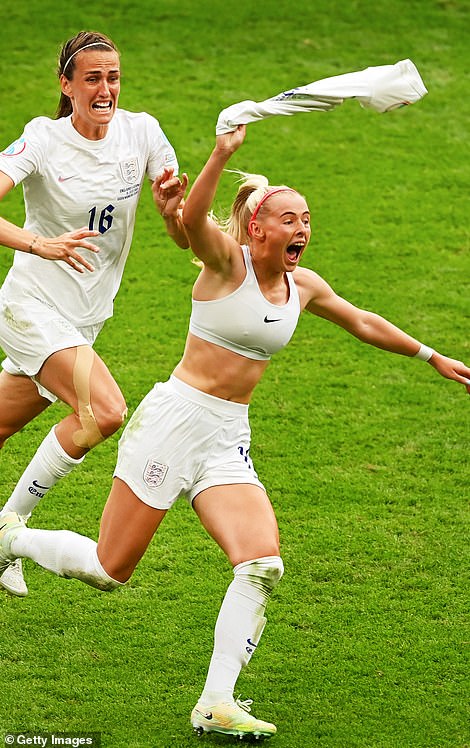 ‘It was a spontaneous gesture,’ she says. ‘I wasn’t thinking about [making a statement about] women’s empowerment. I was just celebrating the moment’

‘I did get low because it was tough,’ says Chloe, who plays as a forward for Manchester City in the Women’s Super League. ‘We were playing against Birmingham and there were no fans in the stadium [because of Covid restrictions], so everyone probably heard the scream of my injury.’ She shakes her head in wonder. ‘From that to this . . . I didn’t play for 335 days. It was a long road.

Chloe was helped by her hugely supportive parents, Jane and Noel, as well as her boyfriend of three years, Scott. She doesn’t know how she’d have got through that time — which included surgery and many months of rehabilitation — without them. 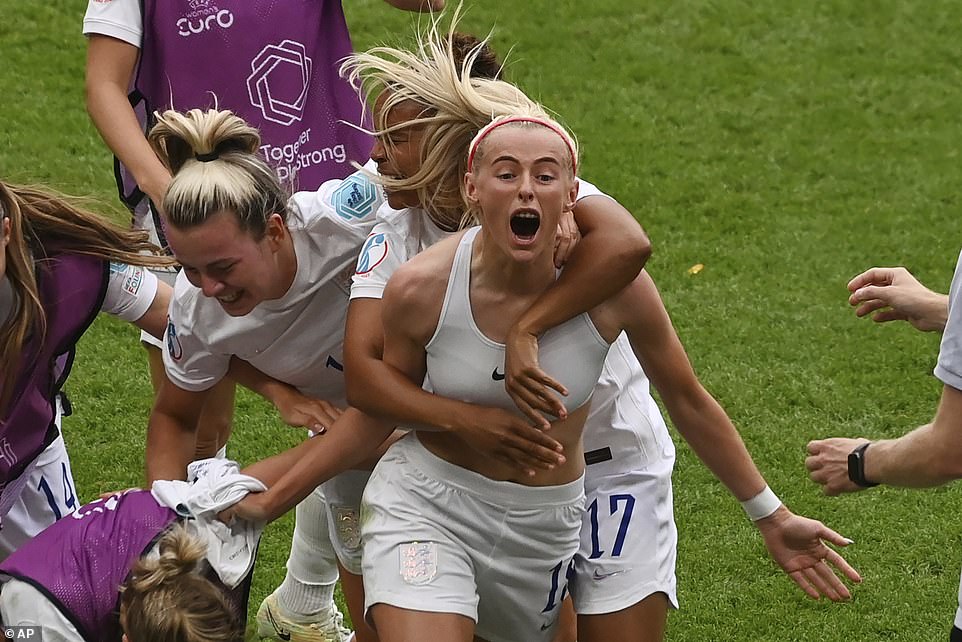 ‘I was in that amazing moment, not questioning what anyone would say. I knew I’d get booked but it’s the best yellow card I’ve ever received’

‘Scott’s someone I can just be myself with and he tells me when I can be better on the pitch, which I really like. I love honesty. When someone’s honest with me, I listen.

‘Recovering from my injury was a long road. I was in so much pain I couldn’t even get out of bed. You feel worthless in those moments. I worked with a psychologist and that was the best thing I’ve ever done because, when you’re injured, your mental state is tested and bottling everything up isn’t the right thing to do.’

One of her first games after returning to football was in May. She scored a goal and, four weeks later, joined the Lionesses at their training camp.

‘Sarina [Dutch coach Sarina Wiegman who took over from Phil Neville in September 2021] welcomed me into the group and said: ‘You’re here for a reason. Let’s go and show what you’re capable of.’

‘I thought it was amazing how far the group had come from before I was injured. Since we’ve had a new manager, there’s a mentality of ‘We’re going to win a tournament’.

‘We believe in ourselves. Sarina just has this way about her. I think the missing piece of the jigsaw for the Lionesses was Sarina.’

Indeed, Chloe is defined by her innate sense of self. She isn’t influenced by social media because ‘sometimes you can dig too deep’, and has little time for the ‘nonsense’ (Culture Secretary Nadine Dorries’s word) debate whipped up by the BBC over woke suggestions that the Lionesses’ nickname is ‘sexist’.

‘I think [the nickname] is great,’ she says. ‘We saw on Sunday how strongly the Lionesses can roar. I think it’s very powerful. We are girls — but we can do a job.

‘You play football because you love football, not because you’re a tomboy or want to be a boy,’ she says. ‘When I was a little girl, I was in my kit all the time, but I wasn’t a tomboy. I was just a girl who wanted to play football.

‘So, yes I like to get my nails done and my eyelashes done, but I’m still a footballer. I’m just a young girl who has a big dream of becoming something special.’ 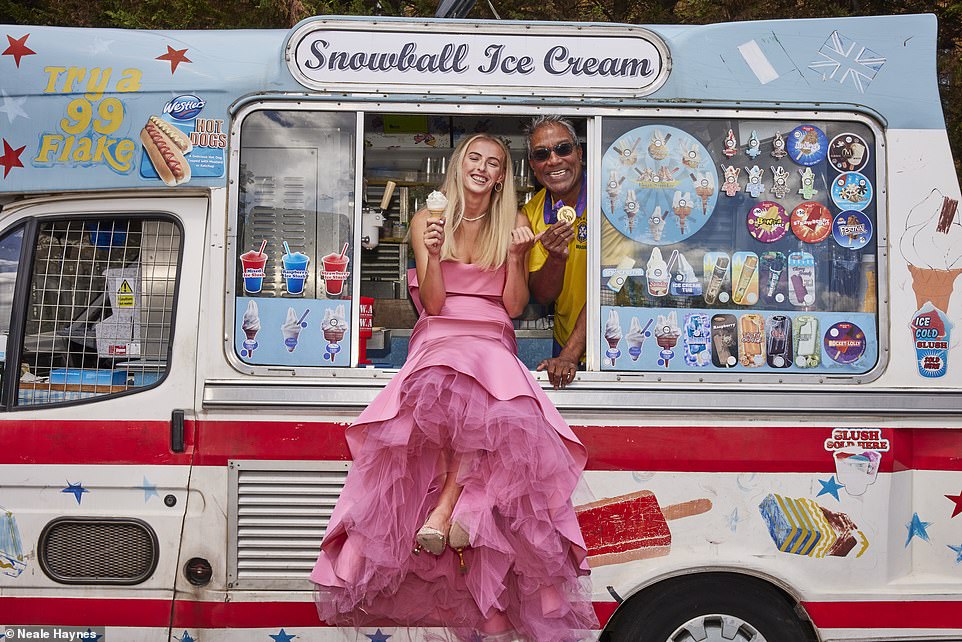 See also  Nadal: 'Sinner is growing, as always I will give my best' - Tennis

‘I think [the nickname Lionesses] is great,’ she says. ‘We saw on Sunday how strongly the Lionesses can roar. I think it’s very powerful. We are girls — but we can do a job’

Chloe, the youngest of seven — she has five older brothers, including triplets, and an older sister — dreamed of ‘being on the TV playing football’ from the moment she could kick a ball in the square outside the family’s terrace home in Ealing, West London.

From the age of seven, she joined her brothers playing football in a caged gravel pitch on the Windmill Park Estate, which was, she says, ‘where I was my happiest’.

‘I enjoyed school but I wasn’t the brightest. To be honest, my focus was football. Everyone will tell you that. We’d be out there from when it was first bright to when the street lights were coming on.

‘I think playing cage football defines who I am today. It’s where I get the creative and physical side of my game. I like a physical battle because I always played with older boys who were making it very competitive.

‘I love going back to the cage. It brings back so many memories. There was a thorn bush right behind it and if the ball went over it popped, so someone always had to get a spare ball. Memories like that are very special.’

Chloe says her brothers are ‘brilliant, amazing people’ who never ridiculed the fact she was a girl. ‘They believed in me from day one and always said I’d be a superstar.

‘That’s what they used to call me from when I was about ten: ‘Superstar’,’ she says. ‘Don’t get me wrong, there were times I’d play in a tournament and boys would say, ‘Oh, they’ve got a girl in their team’, or ‘that’s a girls team’, and they’d laugh at us. But it never affected us — we’d just get on the pitch and show them what we were capable of.’

In today’s victim culture, when accusations of sexism are tossed around like, well, the ball at Wembley, you can’t help but warm to her sheer level-headedness.

‘It’s my family who have shaped who I am today,’ she says. ‘They say: “Stay true to yourself. Don’t be someone you’re not. Just be very humble but hard working.”

‘They bring me back to never forgetting where you come from.

‘Like now, winning the Euros. I see my face in lots of places, but I go home and I’m just a normal young girl.

‘[When we won] I went up to Mum in the stands and gave her a massive hug. She made me cry, to be honest, because she’s so emotional. She was saying about my grandparents [who died several years ago] looking down on me and things like that.’

For a moment, Chloe is momentarily sad. You know she loves her family dearly. ‘I think of those people in those moments.’ 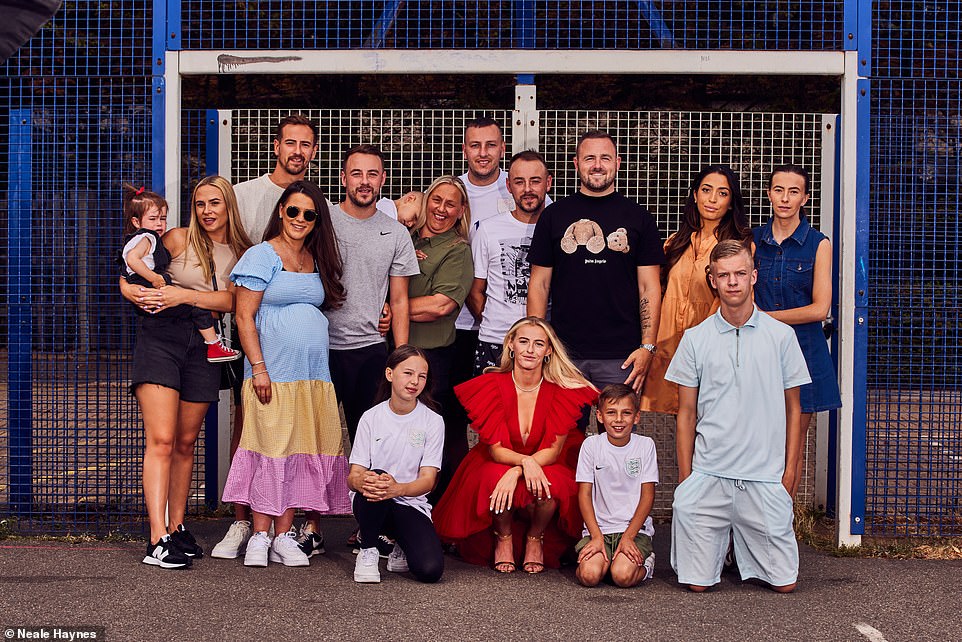 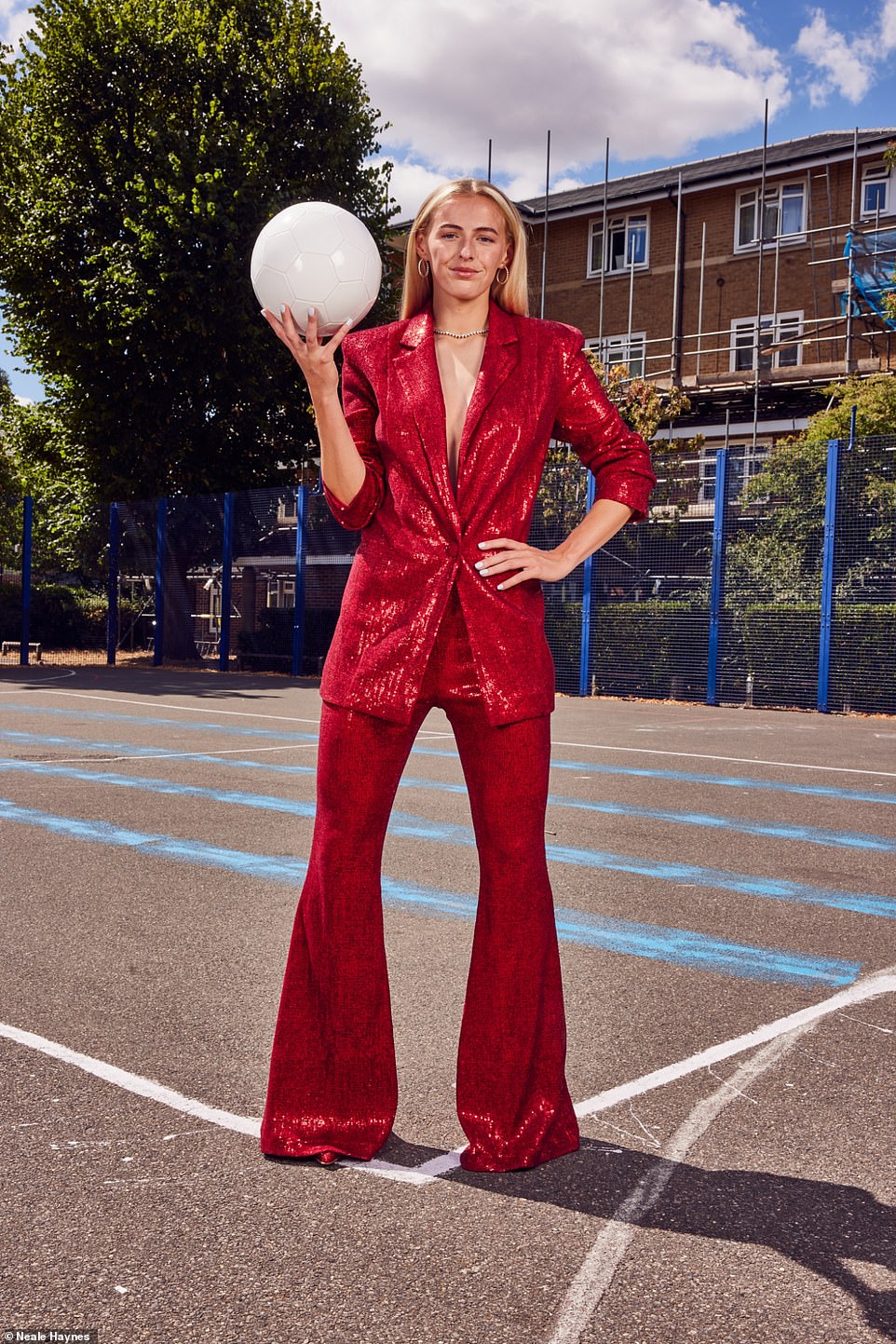 ‘You play football because you love football, not because you’re a tomboy or want to be a boy,’ she says.’ When I was a little girl, I was in my kit all the time, but I wasn’t a tomboy. I was just a girl who wanted to play football

I tell her I’m sure they’d be very proud of her. The entire nation is. On the way to meet Chloe, I saw two little girls on a basketball court playing football — inspired, no doubt, by our Lionesses.

The same day, in a powerful open letter, the winning team urged the next Prime Minister, whoever that may be, to ensure girls get two hours of PE lessons a week and that every schoolgirl in the country is given the same access to football as boys.

Wouldn’t it be great if a generation of girls were empowered by the sort of personal achievement we saw at Wembley on Sunday instead of, say, the likes of the Kardashians or Love Island contestants?

‘It’s been about doing something from the heart and doing it because you want to do it — something you believe in, something you want to achieve. The [women’s] game has grown so much. That’s a credit not just to us but to the women who played previously as well, players like my idols [former Arsenal and England players] Kelly Smith and Rachel Yankey,’ she says. ‘We’ve definitely inspired so many people: not just me taking my top off and not just across England but the world.

‘Do you know, we even had people come in to speak to us about which sports bras were best for us, based on how we’re feeling after games and exercise.

‘It was very individual for each player. I think that shows how much the game has grown that they’re even looking into bringing out the best in someone by digging into what sports bra is best.

‘Mine’s by Nike. It’s not a specially made one — you can just buy it in the stores — but it’s special to me.’

I understand that she’s planning to frame it? ‘Of course,’ she says her face once more breaking into that irrepressible smile.

‘I have to frame the iconic bra, don’t I? I think it’s the way that moment has empowered women that’s made it so iconic, but also we’d just won the Euros.

‘We wore the badge with such pride, but it makes you hungry for more. There’s a World Cup just around the corner and we’ll keep on roaring.’