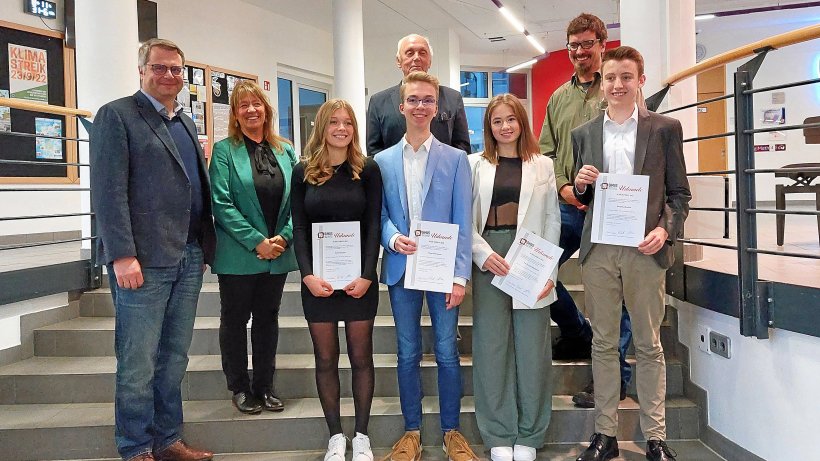 Lennestadt.
The Dieter-Mennekes-Umweltstiftung honors four outstanding high school graduates with scholarships. Why they deserve the award.

The scholarships of the “Dieter-Mennekes-Umweltstiftung (DiMUS)” took place this time at the Municipal Gymnasium Lennestadt (GymSL) in Altenhundem. Honored were Smilla Streit and Max Henrichs (both Gymnasium Maria König) as well as Victoria Büdenbender and Cedric Greit (both GymSL). The high school graduates receive the scholarship of 1,500 euros for their voluntary commitment and at the same time excellent academic performance.

Headmistress Birgitta Pieters first looked back on the achievements of Dieter Mennekes and placed the goals of DiMUS in a broader social context: one can only answer the big questions of our time together by bringing the ecological, social and economic dimensions into balance, without burden the needs of future generations. Through the sustainable management of his forests, Mennekes made a decisive contribution to the fulfillment of this goal and was “ahead of his time”.

Michael Beckmann, as deputy mayor of the city of Lennestadt, also initially remembered Dieter Mennekes, who died in 2020. The conviction that there is little point in being the richest man in the graveyard has become a leitmotif in life for him. Beckmann emphasized the “hands-on, motivating manner” of the foundation’s founder, with which he had sustainably strengthened voluntary commitment in the region.

Harald Jüngst (MK) gave the eulogy for Smilla Streit. Alluding to Francis of Assisi, he characterized the award winner as a person who has mastered the “art of life” with head, heart and hands. The heart is her “driving force”. So it is logical that Smilla Streit’s commitment to her fellow human beings has always been varied: she trained in the swimming club, provided the school medical service, gave private tuition and helped organize the graduation ceremony. In summary, Jüngst addressed the award winner with the simple appeal: “Keep it up!”

See also  Studies or training – that is the question here

Michael Soemer (GymSL) first put Victoria Büdenbender’s ambition in the foreground of his remarks. Whether as a participant in countless MINT competitions, a “sports aces” on parallel bars or as an environmentalist: Victoria Büdenbender has always shown that professional competence and a high level of commitment to others are not mutually exclusive, but rather complement each other. Soemer particularly emphasized her role as a tutor at GymSL and her participation in a species protection project that contributed to the preservation of the local flora and fauna.

Another prizewinner was Max Henrichs, whom Magnus Reifenrath (MK) attested to a “scientific approach and considerable mathematical depth” in the STEM field. Max is “intelligent, open-minded and goal-oriented.” In addition to these professional skills, there is a high level of helpfulness and patience, which rightly made him a DiMUS scholarship holder.

As a student, Max got a taste of university life and some of the sample solutions from the lessons ultimately go back to him.

Gaby Kordes (GymSL) addressed the last laudatory speech of the evening to Cedric Greit. The laudator referred to Shakespeare’s Sonnet 91: Cedric’s thing was not the pursuit of riches or self-portrayal, but the quiet, modest – but always professional – commitment to others. He would offer his help with programming and run his own website for software development. Finally, she characterized Cedric as a representative of the new generation of digitalization, who is a conscientious and reliable young person.

Finally, Erhard Reichling congratulated the award winners on behalf of the DiMUS board. DiMUS continues to pursue the goal of working on the legacy of the foundation’s founder by supporting initiatives against smoking and species extinction, as well as promoting practical education. With regard to the overexploitation of nature, he warned: “It doesn’t need us. We need them. You just have to leave them alone.”

See also  A native of Odessa shot and burned his dog in Pennsylvania: what threatens the US NAVY physician? | Ukraine

More articles from this category can be found here: Kreis Olpe