Leipzig. On Friday evening at 8:50 p.m. the chandeliers in the ballroom of the Leipziger Felsenkeller go out. Four blue spots light up the stage, synthesizer sounds creep into your ears, Fil Bo Riva takes up the guitar. The fans scream and clap as it should be. For the first time in seven months, a concert will be played on a hall stage in Germany. It’s the sound of a new beginning after lockdown. “So much applause – long time ago”, says Fil Bo Riva, 28, a melancholy songwriter of German-Italian descent, whose real name is Filippo Bonamici and who rocks the evening with his four-piece band.

330 guests sit in the audience, the first indoor concert of the traditional house in the west of Leipzig was sold out within a few days. Most of the fans are young women in their early 20s and are beaming. Some are only there because they finally wanted to hear a concert again and feel something old normal. No matter who is playing. No matter how strict the corona rules are. The main thing is to start again.

And the requirements were high: a daily negative test, including those who had been vaccinated and recovered, an identity card for contact tracking and a pre-ordered ticket. All papers are checked in the entrance by a group of security guards. There are no drinks in the hall, masks are required in all aisles, all guests have to sit at tables that are set up according to distance rules – and a maximum of five. A few young people get up anyway and dance at their table, their eyes light up – a moment of goose bumps. But they are discreetly asked by security to take their seats again. They still have fun, swinging while sitting, rocking their legs, clicking their lighters.

See also  Online concert with MIDNIGHT, KHEMMIS and FULL OF HELL in April

Saxony’s previous Corona Protection Ordinance of May 10th had opened the hall door. Since then, cultural events with a hygiene concept have been possible again in Saxony with a low incidence. “That came out of the blue, many only realized it a few days later,” says Jörg Folta, the managing director of the Felsenkeller. But he and Jessica Droll from the Landstreicher-Konzert agency respond promptly. You book the artist with whom you work more often, activate the service provider, wipe the dust off the boxes and start the advance booking. The house has been closed since November 2nd, now it suddenly wakes up.

“The small artists, freelancers and self-employed people are the ones who suffer from the pandemic,” says Folta. Around 200 people otherwise work at events and in the Felsenkeller’s gastronomy alone. “For them, we wanted to get started again as soon as possible.” Folta believes that a large cultural center like Felsenkeller with twelve employees has come through the crisis better thanks to government aid, short-time work and other subsidies.

The team was even able to refurbish the 130-year-old ballroom during the period of silence. In addition, they have written around 20 hygiene concepts in order to be able to hold all kinds of events under pandemic conditions. Because the beer garden has already reopened and a test center has moved into the foyer, the rock cellar was prepared. “The performance is an important step on the way back to normal,” says Folta when it starts. “An overwhelming moment.” Three television networks sent camera teams to this hopeful moment. 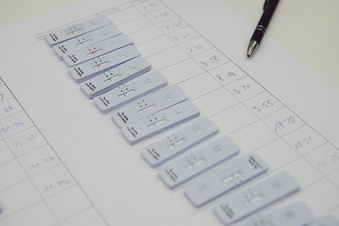 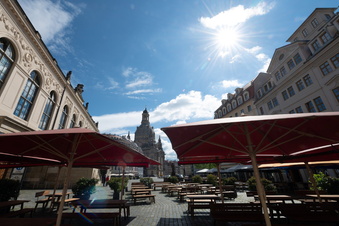 The experiences of the evening are now being shared with interested club operators. “We hope that we will soon have more visitors and fewer restrictions,” says Jessica Droll. After more than an hour, Fil Bo Riva is still playing encore after encore. Then he says: “I hope you go home healthy and happy so that we can celebrate more concerts again soon.” A young woman beams as she walks out. “I’m just happy to finally experience an evening like this again.” Her friend laughs. “But it has never been so narrowly bourgeois.” The next concert is on June 11th. An evening of heavy metal.