Legendary hotels: at the Hôtel du Palais in Biarritz, a G7 with ocean views 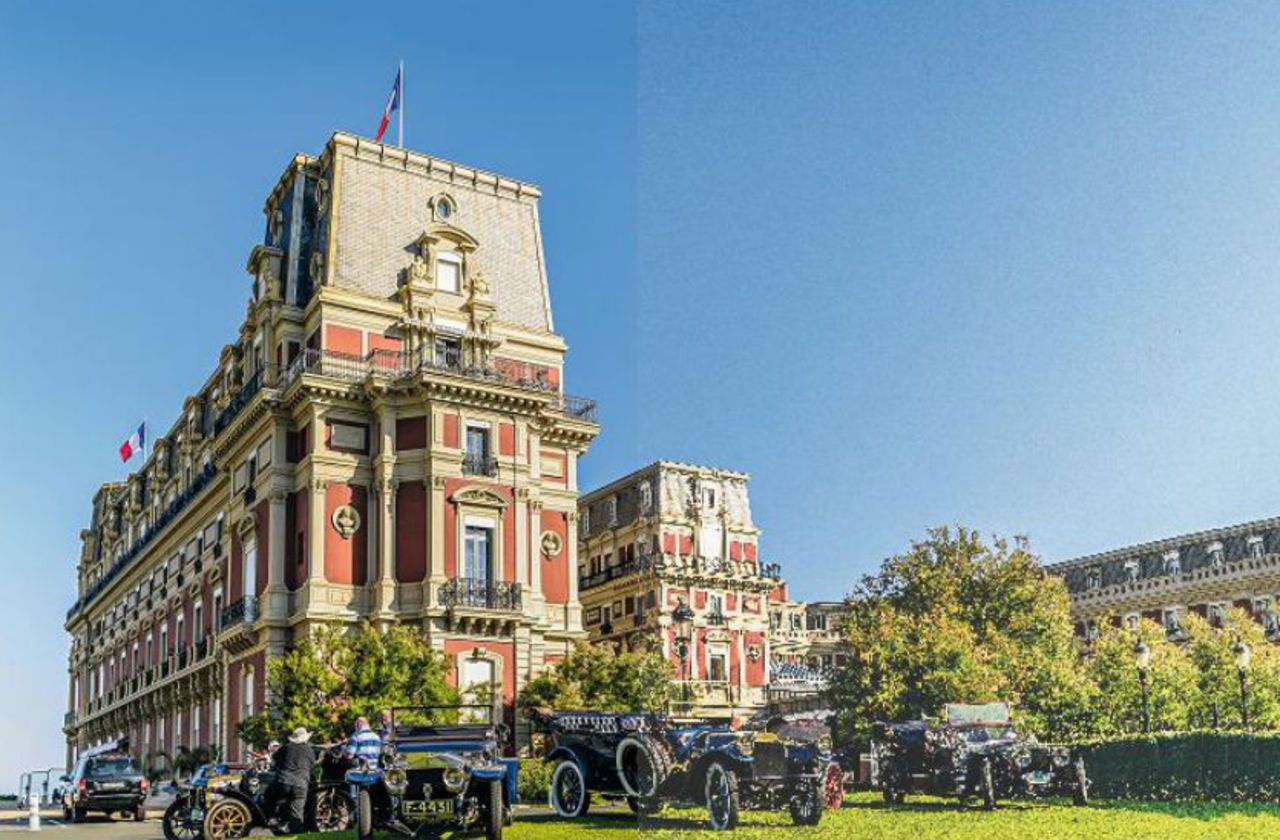 On the magnificent beach of Biarritz (Pyrénées-Atlantiques), from Saturday August 24 and for three days, the leaders of the United States, Japan, Germany, France, the United Kingdom, Italy and from Canada will take a dive… in the Second Empire.

Gathered on the occasion of the G7 summit chaired this year by France, the leaders of this world will discuss how to fight against inequality under the gold of the Hôtel du Palais.

The palace on the Basque coast was requisitioned for this purpose and was imposed a draconian security system. “It is an honor for us,” says Valérie Galan, one of the hotel managers, whose management was entrusted by the municipality to the American group Hyatt a year ago.

Behind the revolving door which gives access to the huge entrance hall where the columns stretch towards the high ceiling, the staff discreetly activate. All trades were mobilized to refresh the building, which was closed for more than six months before reopening on July 1.

The soul of Empress Eugenie

Located in town, a workshop is entirely dedicated to the permanent renovation of woodwork, tapestries, precious furniture, Carrara marbles, chandeliers, mosaics in Italian glass paste and vintage paintings. A somewhat flashy luxury that transported visitors to the end of the 19th century.

Because the hotel is none other than the palace of the Empress Eugenie and her husband Napoleon III. In each room, starting with the hall and the large rotunda-shaped restaurant facing the Atlantic waves, the soul of Andalusian Eugenia Maria de Montijo de Guzman transpires.

On the grand staircase leading to the bedrooms, an immense portrait of the beautiful empress in a ceremonial dress, a tiara of fine pearls in her brown hair, cannot escape the eye.

As a teenager, Eugénie spent her summers in the Basque Country with her mother. She even misses drowning in Hendaye! Conquered by the beauty of the landscapes, from the summits to the beaches, she made her imperial husband discover the region in 1854. “At the time, reaching Hendaye by road was not an easy task,” says historian Alexandre de Miller. from La Cerda, specialist in the palace. It was only a small fishing port populated by whale-hunting sailors, while on the hills lived a better-off agricultural population. “

Only the Bayonne bourgeoisie frequent the place. But the arrival of the emperor will change everything. Napoleon III, tested by the Crimean War (1853-1856), so appreciated this serenity and the invigorating air of the ocean that he acquired, on his own money, ten hectares on the rock of Biarritz, at the foot of the lighthouse , then fourteen additional hectares.

Ten months later, the Eugénie palace, in the shape of an “E” … like the first letter of his first name, was inaugurated. Initially built by the architect Hippolyte Durand, known for having built the Château de Monte-Cristo for Alexandre Dumas father in 1846, the villa will see many other prime contractors succeed one another.

The red brick walls chained with white stone give it a massive silhouette. The end of each wing is surmounted by a pediment. And, since the decision of Napoleon III to spend his summers in Biarritz, the village, like Saint-Tropez when Brigitte Bardot bought her Madrague, attracts the Gotha, the stars and the crowds of tourists.

Eugenie, who gives birth to a son in 1856, receives a lot and the celebrations follow one another. “She loved traveling the countryside, forcing her guests to ride on donkeys where was fixed a cacolet, a double pendulum seat, which was to the taste of those who did not want to face each other,” explains Alexandre de Miller of La Cerda.

Requisitioned by the Germans

In 1870, the Empress no longer came to her dear home. It must be said that the time is no longer on vacation. On July 19, the French Empire declared war on the kingdom of Prussia. Defeated on September 2, Napoleon III was taken prisoner on the battlefield at Sedan. The next day, the Parisian crowd invades the Palais-Bourbon and Eugénie is forced into exile in England.

She sold the villa in April 1881 to the municipality which transformed it into a casino-hotel, the “Palais-Biarritz”. In 1892, it was sold to a prominent Parisian architect, Octave Raquin. The Hôtel du Palais opened its doors on July 1, 1894 and attracted wealthy customers, including many Russians.

A violent fire partially destroyed it in 1903. The building was then rebuilt almost identically. Although enlarged, it retains its “E” shape and was inaugurated in 1905. A year later, the lease of the business is sold to a Pas-de-Calais merchant, Alfred Boulant.

The owners then succeed one another before the city takes over its management. In October 1940, the Hôtel du Palais was requisitioned by the Germans, who made it their headquarters.

In the 1950s, the sumptuous parties resumed. The Duke and Duchess of Windsor stay there. Then the king of Egypt Farouk, Winston Churchill, Edith Piaf, Charlie Chaplin…

We bet that Eugenie and Napoleon III would have loved to bathe in the sublime swimming pool with the rounded basin of the Hôtel du Palais, built facing the sea in 1954, and take advantage of the private huts erected around.

Just like Johnny Hallyday did (a lion cub in his arms), Thierry Le Luron, Jacques Martin (at the end of his life, the ex-host had moved there year-round and spent his last there summer in 2007), Richard Berry, Frank Sinatra (who brought in his hairdresser to refresh his haircut), the king of Morocco, the actors Gary Cooper, Romy Schneider, and before them, the American author Ernest Hemingway…

This weekend, the G7 meeting will no doubt be less festive. But some guests could find an occupation there. Like meditating in the Orthodox church which adjoins the hotel. Or visit the Eugenie chapel, built at her request in homage to Our Lady of Guadalupe, patron saint of Mexico, where France was fighting to preserve the country from the American yoke. A sign ?