“Juice = Juice Concert 2021 ~ FAMILIA ~ Tomoko Kanazawa Final” was held at Yokohama Arena on November 24th. This is Tomoko Kanazawa’s graduation performance, and is also the first solo performance for new members Ichika Arisawa, Risa Irie, and Himesaki Ebata who joined in July. A special live with various meanings starts with “Don’t be afraid, hug me”. Attract fans with a fascinating performance that uses the stairs behind the stage. And, “Future Smile” is performed with a cool dance that feels sex appeal. It can be seen that even if new members with little experience join, the performance ability does not decline, but rather it contributes to the improvement of the group. The appearance of 10 people dancing in a row in the major debut song “In the middle of romance” is powerful and overwhelming.

In a good way, it’s a cool Juice = Juice performance that doesn’t seem like a graduation performance. Kanazawa also smiled and said, “I’m thrilled, but I’m enthusiastic!” And a performance with 7 people excluding new members will be unfolded. First of all, “DOWN TOWN” which is a cover of Sugar Babe is shown gorgeously. It also incorporates voice percussion by Rei Inoue, covering it in a way that only they can do. In “Va-Va-Voom”, the bold performance of taking off the jacket attracts fans, and even adult-like expressions such as “Tell me what you like” and “Sweet obediently” will be fascinated.

They also have excellent singing ability. In particular, “Poturito”, which was shown while being illuminated by blue lighting, was a masterpiece. Solo singing is also wonderful, but the power of unison singing is goose bumps. When high-level vocalists get together, it’s naturally the best song. The same is true of “Plastic Love,” which was performed by 10 people again. Although it is a cover of Mariya Takeuchi, it is a strange expression that makes you feel the individuality and awesomeness of the harmony and song splitting that makes the best use of being a group.

The “watering can” that was shown by only three new members is cute and fresh. It has a different charm from senior members. At the medley corner of a small group of members, mainly Kanazawa, who changed each song, they performed four songs in quick succession. In particular, “Synchro.”, A duet by Kanazawa and Akari Uemura, was impressive. I felt the bond between the two when they sang while staring at each other with a smile.

The second half of the live performance. With seven people again, up-tempo songs will be performed in quick succession to raise the enthusiasm. In particular, the soulful singing in “Fiesta! Fiesta!” And the sharp solo dance by Ruru Danbara and Manaka Inaba were overwhelming. With 10 people again, the powerful “CHOICE & CHANCE” and the “Magic of Love” performed in the aisle, the fans were excited. At the last MC of the main story, he said, “I will sing a very good song. I will do my best to sing with a smile,” and then show off the new song “Familia.” Kanazawa was holding his eyes on the way, but at the end he sang with a smile. The last is “Goal ~ Tomorrow is over there ~”. Members who perform with all their might, running around the aisles and waving to the audience seats. In this song, it was standard for fans to call “Here it is Tomoko!”, But Uemura and Riai Matsunaga were screaming while hugging Kanazawa instead of the fans who couldn’t speak out due to infectious disease countermeasures. The main story ended with a performance that was only fun and did not make you feel sad or sad. 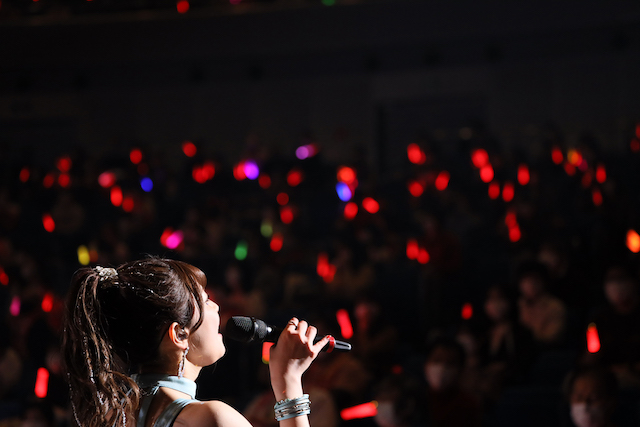