In the Tarn, discover the flamboyant Albi 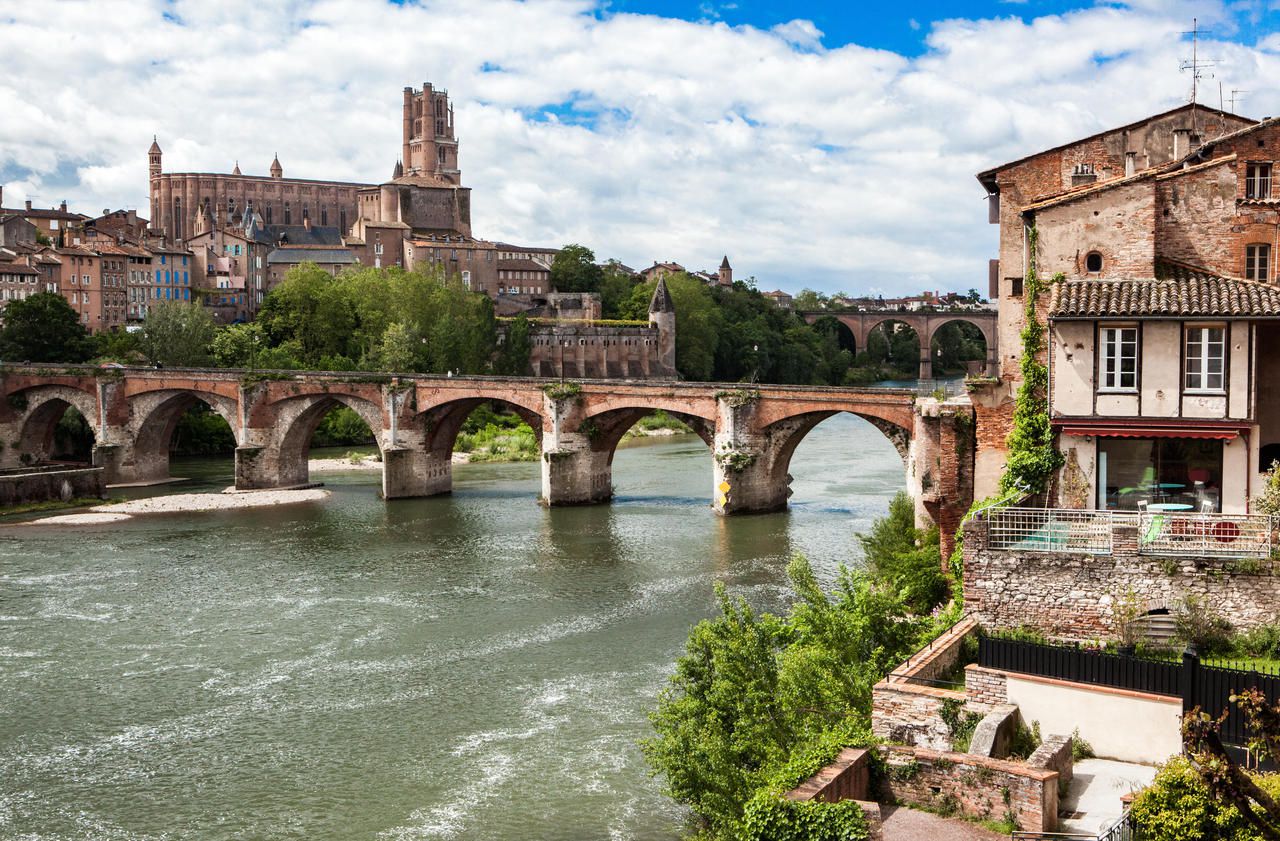 The arrival is striking. Approaching the Old Bridge, from the 11th century, we discover Albi, an imposing episcopal city perched on the banks of the Tarn, an almost intact medieval town listed as a UNESCO World Heritage since 2010. One hour from Toulouse, it is the one of the most beautiful towns in France, built in red bricks, with its shimmering colors at sunset.

In the Middle Ages, Albi was a rich city. In the aftermath of the Albigensian crusade against the Cathars, she wanted to show her victory. This is how the first stone of the Sainte-Cécile cathedral was laid, the “Fortress of God”, in 1282. Some Albigensians have left their mark in history, like the navigator Lapérouse (1741-1788). It gave its name to the oldest high school in the city, where the socialist Jean Jaurès taught philosophy at the end of the 19th century.

The Land of Cocagne

But the most illustrious of them remains Henri de Toulouse-Lautrec, born in 1864 at the Hôtel du Bosc, a majestic property now located on rue… Toulouse-Lautrec. It still belongs to the family and cannot be visited, but a museum dedicated to the painter is sumptuously installed in the Episcopal Palace of La Berbie. It was almost by chance, after the refusal of the Luxembourg museum in Paris and that of Toulouse, which did not want to exhibit “horrors”, that the birthplace of this genius portrait painter recovered his masterpieces .

Albi is not just a museum city. At the beginning of July, music resounds throughout the city during the Guitar Break festival. And each public square is requisitioned by the artists of the Off. As soon as you move away from the center, you quickly gain a beautiful countryside, hilly and green like a small French Tuscany.

We discover the hilltop village of Cordes-sur-Ciel, the banks of the Canal du Midi, the Pays de Cocagne, land of pastel, used to make the precious dyes that made the region prosperous until the end of the 15th century . The maceration and oxidation of this plant with yellow flowers that looks like a dandelion gives amazing shades of blue. In Lautrec, a preserved medieval village, no trace of the painter, but workshops where enthusiasts bring back this ancestral artisanal know-how. A decidedly colorful region!

Admire the works of Toulouse-Lautrec

The former Episcopal Palace of La Berbie houses the largest collection dedicated to the artist in the world. We are struck by the modernity of the canvases of Toulouse-Lautrec, better known during his lifetime for his work as a poster designer – including the famous Moulin Rouge, La Goulue – than for his paintings, considered to be sulphurous. This descendant of the counts of Toulouse, suffering from a congenital bone disease, never exceeded 1.52 m.

Died at 36 in 1901, gnawed by syphilis, he was one of the first to take a look behind the scenes of the world of entertainment and Parisian nightlife. Without concession or moral judgment, he immortalizes the “people” of that time: Aristide Bruant, the chocolate black clown, the singer Yvette Guilbert … The museum recreates, with its red velvet benches, the atmosphere of party Paris. www.musee-toulouse-lautrec.com

When one enters, the eye is drawn to the astonishing representation of the “Last Judgment”, produced by Italian artists in the 15th century. A kind of BD of the Bible, which lists the punishments punishing the seven deadly sins. In the choir, behind a marvelous lace of stone, are aligned countless sculptures of guardian angels, all different. It’s up to everyone to find their own … And a tribute to Sainte-Cécile, the patron saint of musicians: the cathedral is renowned for its acoustics and its organ.

In the former Annonciades convent, behind the cathedral, the museum brings together a few thousand costumes developed between the 17th century and the 2000s. It presents only a tiny part each year, on a specific theme (currently, the embroidery), in five subtly lit rooms.

You must take part in the visits that Dominique Miraille, passionate collector and creator of the museum, comments with many crisp anecdotes on the former owners of these wonders. All these clothes, even the virgin white dress of the 19th century, are in immaculate condition. Commented tours on Sunday, at 3 p.m. and 4:30 p.m. www.musee-mode.com

By plane: return flights Paris-Toulouse from 65 euros. Then an hour by car. www.easyjet.com. Information www.tourisme-tarn.com

Where do we sleep?

Château de Ronel, in Roumégoux. 18 km from Albi, in a country house from the 18th century, five charming rooms furnished with antiques. A large biological swimming pool and an excellent breakfast. Double room from 145 euros. www.chateauderonel.fr

Where do we eat?

The Tarn Bridge, in Albi. An unpretentious little restaurant with a beautiful terrace next to the Pont Vieux. We favor local producers and the menu at 18 euros, based on fresh products, changes every day. The Toulouse-Lautrec formula at 35 euros is based on the artist’s recipe book. A delight! Reservation recommended. www.facebook.com/lepontdutarn81

Cassoulet advice, duck breast, country ham … You can buy specialties from the Southwest from small producers at the covered market, a hall from the beginning of the 20th century, from Tuesday to Sunday morning. Marcheecouvert-albi.com

The farm in the village, local products, authentic and natural. Site: www.lafermeauvillage.fr

Share
Facebook
Twitter
Pinterest
WhatsApp
Previous articleA herd of goats invades a deserted Welsh town
Next articleUS aircraft carrier calls for help in the Pacific
Save 60.0% on select products from SAMMIX with promo code 6018YMV7, through 4/25 while supplies last.