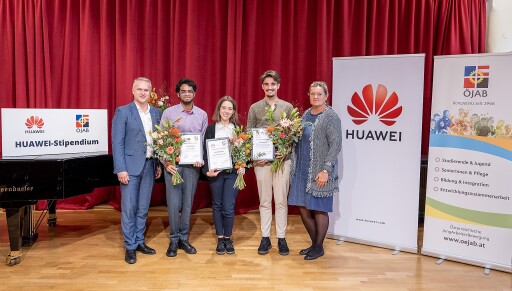 In cooperation with ÖJAB, Huawei has again this year awarded three scholarships to young talents who have to move to another city for their studies.

Vienna (OTS) – At an official ceremony in the ÖJAB residential building on Johannesgasse in Vienna’s 1st district, Huawei, in cooperation with ÖJAB (Austrian Young Workers’ Movement), presented three Huawei scholarships for the eleventh time. With the scholarship, the young talents received a housing credit for an entire academic year.

Talent development more important than ever
This year, the cooperation between Huawei Austria and ÖJAB, which has existed for more than a decade, has become even more important: due to the geopolitical developments and the associated price increases, which are also reflected above all in housing costs, it is for many young people has become particularly difficult to finance an apprenticeship. “We believe that education should not become the privilege of high-income families. Cultivating talent, regardless of origin and background, has been in Huawei’s DNA since the beginning. We are pleased that we have now been able to sponsor more than 30 students and that we can once again relieve three such ambitious young people of financial worries this year“, says Erich Manzer, Deputy CEO of Huawei Austria.

In order to be able to apply for one of the scholarships, the participants had to prove that they had good school or study success and their financial needs. In addition, the students were asked to write an essay on the topic “How state-of-the-art technologies can contribute to a more sustainable world”. Kevin Kain from India, João Pinheiro da Silva from Portugal and Fanni Gabriella Südi from Hungary were convincing this year.

„I’m really thankful to get the scholarship from Huawei this year,” said Kevin Kain. “It was my great wish to study in Vienna, but at the same time I was aware that it would be a major financial challenge for me and my family. The scholarship has brought me a big step closer to my dream and I am really looking forward to everything I will learn this year!“

Official ceremony on a small scale
As part of a small ceremony in the ÖJAB-Haus Johannesgasse student residence in Vienna’s 1st district, Dr. Monika Schüssler, ÖJAB Managing Director and Erich Manzer, Deputy CEO of Huawei Austria, presented the scholarship holders with the certificates and a credit note for a free place to live for one year.

“At 43 ÖJAB locations in Austria, including 28 dormitories, our 750 full-time employees and several hundred volunteers work every day to do social work and support young and old people. Huawei makes an important contribution to this by covering the housing costs for three socially disadvantaged students in ÖJAB houses every year. We are very happy about that – because if everyone contributes something, we make the world a better place!“, says Dr. Monika Schüssler, Managing Director of ÖJAB.