Düsseldorf The initial euphoria has turned into disillusionment. “We wanted to set up ten fast charging stations a year,” says the manager of a medium-sized energy company from northern Germany. In the end, only ten went into operation in three years, with two charging points at each column. “We would like to set up more and would also have the locations. But it’s too laborious. “

The sentence of the medium-sized company is an example of the slow expansion of the charging infrastructure for electric cars with all its pitfalls. Actually, there could already be almost 30,000 publicly accessible charging points in this country and thus advance electromobility. In any case, that’s how many were approved in the federal funding program “Public Charging Infrastructure”, which ran from 2017 to 2020.

When it comes to fast charging, which is considered to be an important means of combating the range fear of e-car drivers, the disparity between desire and reality is particularly large. Operators wanted to build 9,634 subsidized fast charging points, but only 1,987 are still in operation today.

Top jobs of the day

Find the best jobs now and
be notified by email.

There are many reasons. But one phenomenon dominates everything: various bureaucratic delays line up and multiply. Small and large companies are slowed down by long processing times, administrative chaos and approval procedures.

See also  How will the closure of schools due to the pandemic affect children?

Anyone who can afford it builds without funding

Those who can afford it build without any funding or ultimately do not make use of the laboriously approved funding – so that they can move forward more quickly. The funding meant that you had to go through a complex process, says the fuel company Aral. “We wanted to build a certain portion of the portfolio quickly and therefore deliberately avoided funding.”

The Energie Baden-Württemberg Group (EnBW) was also able to become the largest operator of fast charging stations in Germany in a relatively short period of time because it carried out the majority of all projects with its own investment. Less than half of the more than 1,500 fast charging points have received funding.

“In the case of subsidized locations, one must roughly assume that application, planning and implementation periods will be extended by an average of around six to twelve months,” EnBW writes on request. The application process for funding alone could take several months. However, a project may not start before receipt of a funding notification. “You often wait for nothing,” says another company.

Then it is important to observe special tendering rules when purchasing the charging stations, which can also take several months. “Outside of funding, we can tender bundled framework agreements for larger quantities that save us time and money in implementation,” explains EnBW.

And in the end, the companies are waiting for their money. The funds are only paid out when the charging points are in place and all invoices have been checked. Companies report that they wait half a year or more for the transfer from the state. That can also be a reason for the small amount of funds paid out. 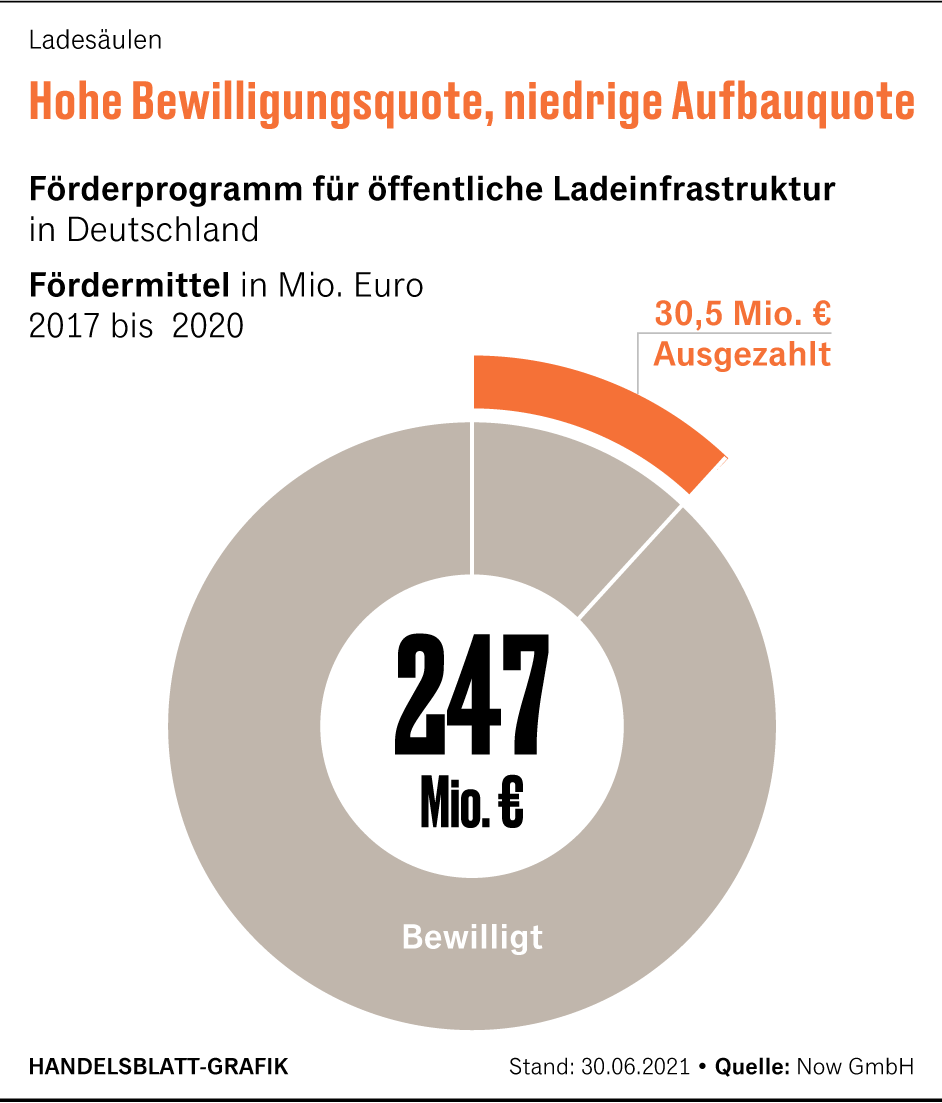 The federal government’s advisors in matters of e-mobility are well aware of the problems: “The processing of funding applications by the project sponsors is one of the bottlenecks in setting up funded charging infrastructure,” writes the National Charging Infrastructure Control Center, which is part of Now GmbH.

The processes surrounding the application at the responsible Federal Agency for Administrative Services (BAV) would be examined and improved where necessary. “Nevertheless, a duration of several months cannot be ruled out at the moment.”

Companies hardly want to operate with this uncertainty. But only large corporations like EnBW and Aral can afford to forego subsidies; small and medium-sized companies depend on it.

In the case of fast charging stations, building up with funding is currently the only way to be able to operate them reasonably economically. The construction of a 150-kilowatt column costs around 100,000 euros per location without subsidies; if a transformer station is added, which has to be built for larger outputs, it costs 130,000 euros and more. The amount of funding depends on the size of the company and the location. On average, it amounts to around 30 percent of the costs.

The complementary funding programs of the federal states make it even more difficult for applicants. Different documents are required in each federal state. And once everything is in place, it can happen that the funds are no longer available. “Then it says: ‘We were surprised by the high demand. You submitted your application early enough, but the application will probably no longer be approved, ”reports a medium-sized company. What many miss is feedback. “There is never any information about the application status. That creates a climate of investment uncertainty, ”says one manager.

For example, you can only submit an application if the network operator has made an offer. That too can drag on. The grid connection is generally the major obstacle that can slow down any project, regardless of funding or equity.

A guideline from the industry association VDE states that an offer for a grid connection must be submitted within eight weeks of the application. “In reality, however, this usually takes three to four months,” reports the Dutch company Fastned.

The average network operator needs six to nine months from the application to the actual construction of the medium-voltage connection, reports Aral. “We also had network operators who made it clear that it would take more than a year.”

That’s why Aral put some projects on hold and focused on other locations where they could build faster. “We regret that you sometimes have to make suboptimal decisions for the customer or your own profitability, driven by external influences such as the grid connection.”

The Federal Association of Energy and Water Management explains the delays with limited “operational resources of the network operator”. The duration is also dependent on the approval authorities, construction companies or service providers.

The operators of charging stations have to renew their funding applications again and again because the grid connection is a long time coming. Actually, a charging point should be set up within a year from the granting of funding. In some cases, the BAV had to formally beg for an approved budget to be called up.

A major challenge lies in the different requirements of the more than 870 network operators in Germany – both in terms of network connection costs and technical requirements. “Construction cost subsidies, for example, vary by up to 300 percent depending on the region and network operator,” says Fastned. The amount of the building cost subsidy depends on the individual case. “Different high construction subsidies and network connection costs can also reflect the different connection situations,” writes the Federal Network Agency.

Partly questionable requirements of the administrations

The local bureaucracy is also delaying the plans. “Some authorities give the approval pragmatically and quickly, others have requirements that we cannot understand,” says Aral board member Alexander Junge.

At a truck stop, for example, located directly on a motorway exit in the forest, the company should submit a noise protection report for approval of the transformer. “Something like that might make sense in the city or in a residential area. But in this situation we couldn’t understand it. “

Although charging stations do not require approval in most of the state building codes, necessary additional components such as transformer stations or roofing lead to applications for approval with waiting times of up to a year. “In this way, the simplification of the expansion, which is well-intentioned by politicians, is being undone,” says Aral manager Alexander Junge. 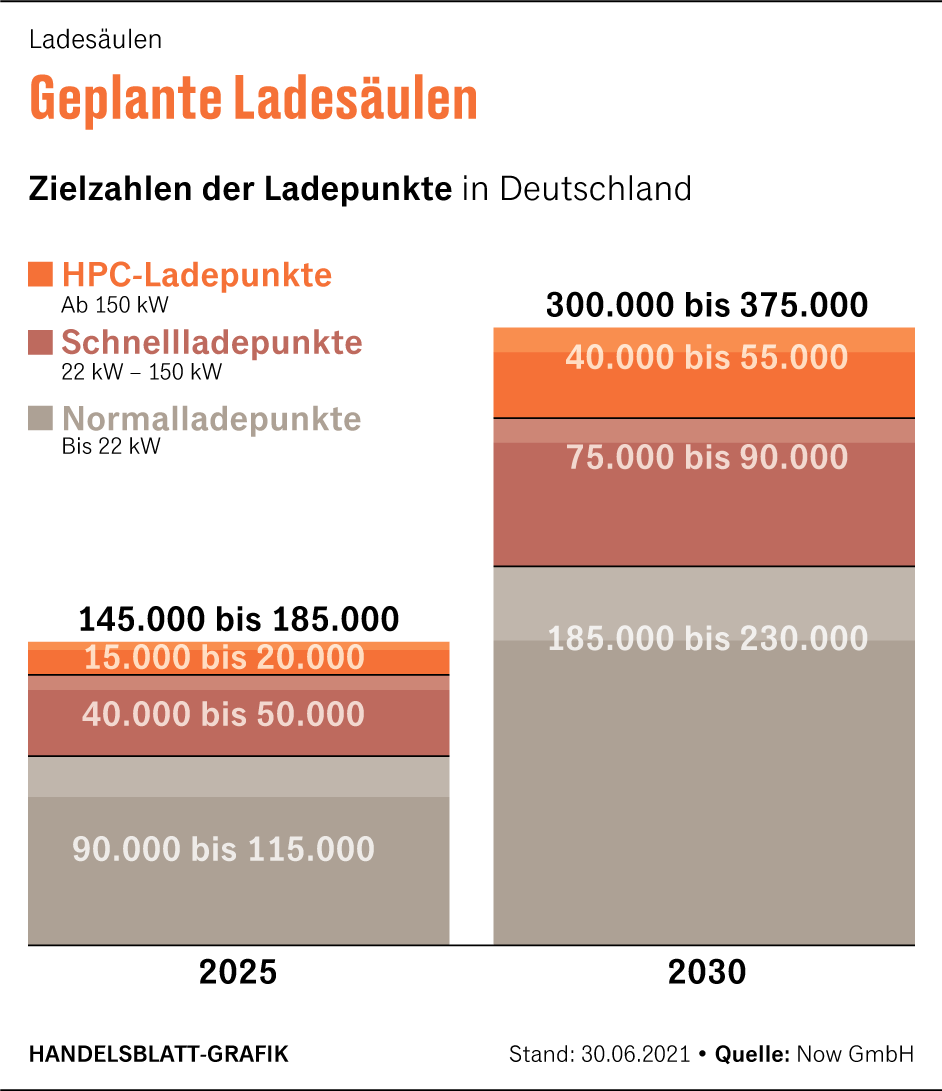 The administrative structure in Germany must be questioned, demands Johannes Pallasch, Head of the National Control Center for Charging Infrastructure. “It must be able to react quickly enough to the rapid changes brought about by electromobility and, where necessary, should be adapted to the dynamics of the mobility transition.” For example, the municipalities would have to accelerate their approval procedures. But network operators, charging point operators and traction power providers should also intensify their commitment.

Now the federal government wants to counteract this with a new funding program that will be published soon and focus on fast charging. Another 500 million euros will be made available for this. That’s not all. In addition, there are almost two billion euros that will be awarded for the tendering of the Germany network.

As the past shows, however, it is questionable whether money alone can effectively accelerate expansion.

More: The e-car problem: Thousands of tons of batteries end up in the garbage prematurely