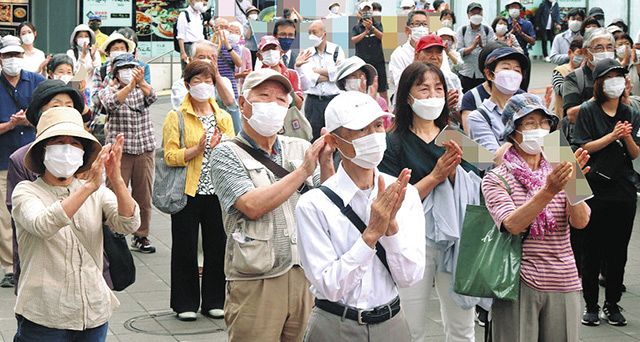 Voters gathered in the candidate’s speech

Candidates appeal for the policies they want to achieve, but voters choose them. I asked at each speech venue what kind of thoughts I would entrust to my vote.

“I would like to ask for investment for the future, such as support for young people.” Tomoaki Otsuka (48), who runs a coffee shop in Maebaranishi, Funabashi City at the north exit of JR Tsudanuma Station, said, “I think it is important to support the child-rearing generation and young people who are suffering from repayment of scholarships.” I hoped for a politics that would nurture the human resources who would be responsible.

On the other hand, I heard many voices paying more attention to the present life than the future.

Tamio Haneda, a 75-year-old unemployed person from Yotsukaido City, is worried that the prices of supermarket items have risen recently. He says, “I don’t buy PET bottles, I use tap water for my house, and I refrain from drinking alcohol. I want to vote for people who think about the lives of citizens and take measures against high prices.”

Kenji Hirayama (81), an unemployed person in Chuo-ku, Chiba City, also expects a debate on measures against high prices, saying, “Because both couples live on a pension, the prices of vegetables and frozen foods are particularly tough even though their lives are difficult.” The situation in Ukraine is also a concern. “I want the discussions of the Self-Defense Forces to deepen.”

“In order to maintain peace, it is most important to keep Article 9 of the Constitution.” Hitomi Yoshioka (60), a housewife in Wakaba Ward, Chiba City, answered immediately. With Russia invading Ukraine. She expressed her earnest expression, “I want to vote not only for Japan, but for political parties that look to the world and think about peace.”

Ryosuke Watanabe (74) of Kogasaki, Matsudo City, said, “In the election, we actually see the candidates, listen to the complaints, and vote. The impression of the person when we see it for the first time is important.” He said that all he wanted in politics was to protect the land, and he said, “Don’t sell to foreign capital. I want you to protect the abundant nature and firmly support Japan’s agricultural production.”