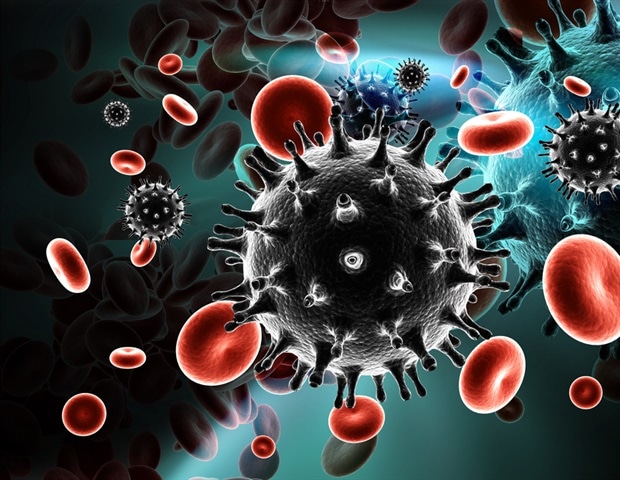 Human Immunodeficiency Virus (HIV) is a highly contagious infection that is usually transmitted through body fluids during sexual contact, blood transfusion, during pregnancy, childbirth and breastfeeding through breast milk. Worldwide, there were about 37.9 million people worldwide with HIV in 2018, and approximately 1.7 million people were recently infected worldwide in 2018 alone.

Digital illustration of the HIV virus in the bloodstream. Image credit: RAJ CREATIONZS

The greatest decrease in new infections in homosexual and bisexual men occurred among those born and residing in the United Kingdom, are white and are between 25 and 49 years old.

According to the Public Health England report, after a sharp increase in new HIV infections in the United Kingdom in 2014, it has experienced a rapid decline between 2014 and 2018, from a staggering 6,278 to 4,453. While the largest decline occurred among gay and bisexual men, people who were infected heterosexually also fell to 43 percent, from 3,400 in 2009 to 1,940 in 2018.

The most pronounced declines were registered in London residents, in people aged 25 to 34, in people of African black ethnicity and born abroad. Almost half of all adults diagnosed in 2018 who acquired heterosexual HIV were born in a country with high HIV prevalence.

The report is a strong indicator that the country is reaching its goal of eliminating HIV transmission by 2030.

“We are on track to achieve the goal of eliminating HIV transmission by 2030, with the rapid decline in HIV transmission in 2018, and almost all those diagnosed receive treatment that prevents subsequent transmission,” Dr. Noel Gill, Chief of STIs and HIV in Public Health England, he said.

“Testing is a key part of the UK’s success. If you have HIV, you can benefit from life-saving treatments that also prevent further transmission of the virus. Certain groups of people are at an increased risk of contracting HIV and are advised to have regular tests, including men and women who have had unprotected sex with new or casual partners in countries where HIV is common, which should be done. tests every year and men who have sex with men, “he added.

The sharp decline in new HIV diagnoses in the United Kingdom can be attributed to the country’s efforts to achieve its goal. In 2018, the United Kingdom continued to exceed UNAIDS objectives. Of the 103,800 people living with HIV, approximately 93 percent were diagnosed, 97 percent of those diagnosed are under treatment and 97 percent of those under treatment are now suppressed by viruses.

Also, thanks to HIV testing, since fewer people are unaware that they are infected. The country aims to perform generalized HIV tests to detect undiagnosed infections. More than 1.1 million attendees in all specialized sexual health services (SHS) were tested for HIV, which has increased by 6 percent since 2017.

Among homosexuals, bisexuals and men who have sex with men (GBM), a total of 127,633 underwent HIV tests, which increased by 9 percent over the previous year.

In addition to the increase in the rate of HIV testing, the decrease has been attributed to the introduction of the pre-exposure prophylaxis pill (PrEP), which is widely and freely available in Wales and Scotland for people at high risk of HIV exposure
By the last quarter of 2018, approximately 13,000 to 19,500 people, throughout the United Kingdom, were under PrEP, most of whom receive the drug through a publicly funded trial or clinic, while others buy it for their account.

“Thanks to the excellent care of the NHS, people living with HIV now have immediate access to highly effective treatments, which means they can expect to live long and healthy lives and trust that they will not transmit the virus to their partners,” he said. Dr. Michael Brady. , Said the National LGBT Health Advisor for the NHS.

“The NHS is determined to continue with significant progress towards HIV elimination and achieve zero new transmissions by 2030, as part of our long-term Plan to improve prevention of preventable diseases and address health inequalities,” he added.

How to prepare for the coronavirus: 5 steps you can take

The US National Archives UU. They admit that they ‘made a...

The 5-minute introduction of Final Fantasy 7 Remake is revealed

“All I want is a crosswalk”: B.C. business owner begs the...

Cases of coronavirus in China, deaths increase while fighting to slow...

The progress of Ebola amid the impending coronavirus crisis

Genomic characterization and epidemiology of the new coronavirus 2019: implications for...