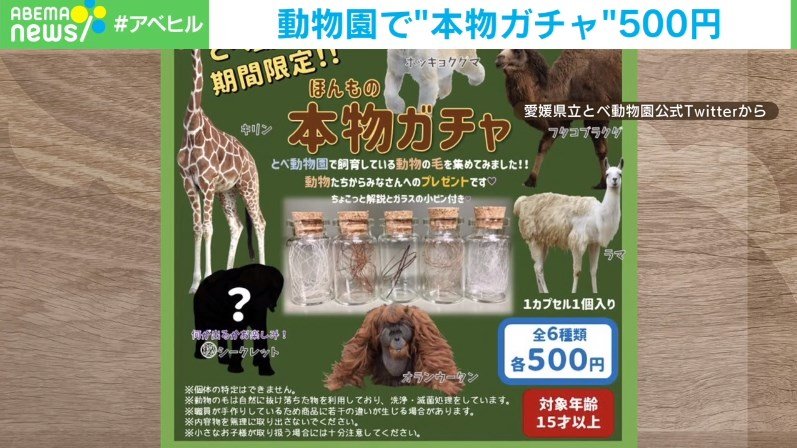 The small bottle of the capsule toy named “genuine gacha” contains real animal hair. More than 100 units were sold in just two days after the sale, and it has been a hit.

It is sold at Ehime Prefectural “Tobe Zoo” from the 2nd, and it is said that it is a capsule toy for 500 yen once. The small bottles contain all six types of fur: polar bears, black camels, llamas, orangutans, giraffes, and secret animals raised in the park.

About half a year ago, they started selling animal hair that naturally fell off after thorough cleaning and sterilization. Usually, you can easily touch the fur of the animals in the cage, and it is said that it has already become a popular souvenir.

“The response was more than I expected, and I thought there would be a lot of pros and cons, but I was quite surprised to find that there were a lot of relatively positive opinions. I would be happy if you could come to like that animal even more.” (Ehime Prefectural Tobe Zoo, Junki Hamada)

See also  A person can get Covid-19 even though they have been vaccinated, this is the doctor's explanation