The editors of Caravan.kz talk about what Andrei Makarevich said about Kazakhstan, where he held dozens of concerts, and what Kazakhstanis tell about him, who not only attended concerts, but also encountered him outside the stage.

In general, Andrey Makarevich from year to year, from decade to decade speaks very warmly about Kazakhstan.

“Remembering Almaty in general, we often come here with concertsI remember very well that we were wonderfully welcomed, and not only in Kazakhstan, but also in all the republics of Central Asia. We love Almaty very much, Tashkent too. Here everything is always hospitable, emotional, very fun. Young people, our peers, came to concerts in Soviet Alma-Ata, then they grew older with us, but young listeners also appeared,” he said in an interview given in October of this year.

In 2014, the artist also shared his impressions, at the same time admitting that he knows how to cook manti.

“I have a lot of wonderful memories 30-35 years long. The first time we came here in the early 80s, we played at the Sports Palace, when we started construction of a hotel on Medeo. Then they came and noticed how something new appeared. First, it is a very hospitable country. Secondly, a very cultured country, with colossal musical traditions. About 8 years ago we arrived, I switched the TV and found a lot of music channels, more than ours. And there was good music everywhere. I can’t help but mention the kitchen, this is generally a separate conversation, this is my passion, ”he said then.

Makarevich thanked the people of Kazakhstan for the warm welcome this time, both Almaty residents and residents of the capital.

“Astana was great! Thanks to the organizers for their care, professionalism and excellent sound, and to the audience for the warm welcome! Delighted physical foreign agent and colleagues,” his Facebook post reads.

He also gladly put on a chapan, presented to him during these tours.

Concerts in Kazakhstan were sold out.

The majority of Kazakhs speak of the singer with admiration, speak of love for his work and respect for his political position, share memories related to his music and not only.

Many listen and discuss the songs of “Time Machine” with their whole families, with spouses, parents, children and even with random fellow travelers.

However, there are many who were not happy about the arrival of the Time Machine. Basically, such commentators write that the group has nowhere else to go, so it tours the former Soviet republics. They are also dissatisfied with the presentation of chapans, believing that the musicians of the “Time Machine” are unworthy of this. 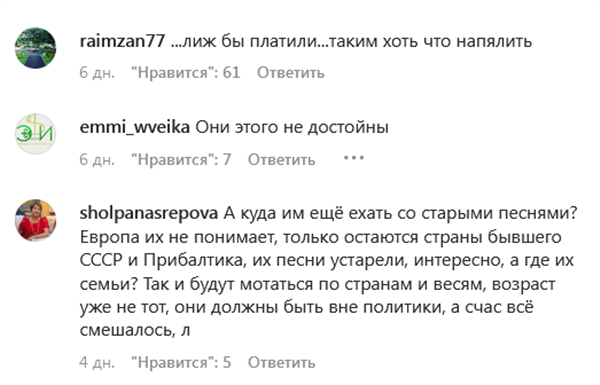 One girl told how approached Andrey Makarevich in one of the malls in Almaty with a request to take a picturethen to show the photo to parents, however, according to her, the singer refused “with a vile face” and ran away. 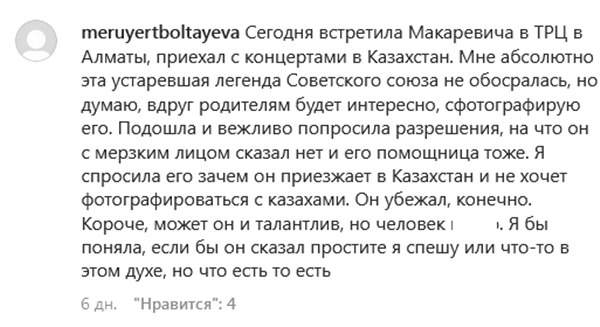