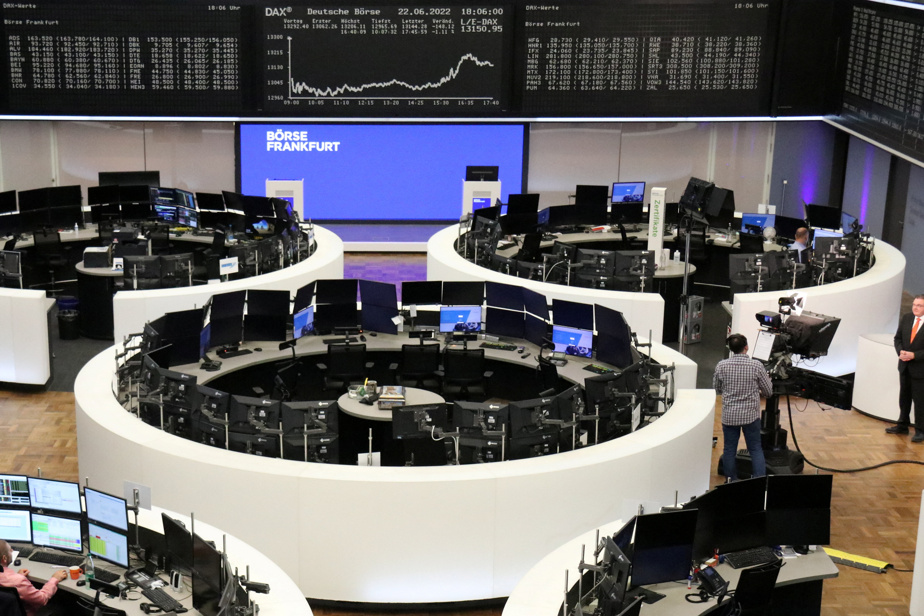 (New York) European markets fell on Thursday, fearing a recession on disappointing economic activity indicators, while Wall Street, tormented by this subject for longer, remained solid, appearing to be banking on a slowdown. of short time.

The trend in Germany was more markedly in the red, with the Dax falling 1.76% on the day the country activated the “alert level” of the plan to secure its gas supply, bringing the country closer rationing measures.

In the euro zone, the S&P Global composite PMI indices revealed a sharp slowdown, more marked than analysts expected, in the growth of economic activity in June, to a 16-month low.

In Germany, it is the fourth consecutive fall, bringing it to its lowest level since the fourth wave of the coronavirus in December 2021, due to “the fall in foreign orders” and the pressure of inflation on domestic demand, according to a statement.

The specter of recession caused a sharp decline in interest rates for European states. The yield on ten-year German debt, which refers to the euro zone, fell to 1.42%, against 1.76% at the close on Tuesday.

These statistics come on top of a backdrop of growing fears of a global economic recession. Thursday, the second day of his annual hearing before Congress in Washington, the head of the Federal Reserve, Jerome Powell “maintained his hawkish position in the fight against inflation,” said Edward Moya, an analyst at Oanda.

The Fed Chairman reiterated that the fight against inflation, at its highest in 40 years, remained “unconditional”.

For Karl Haeling, an expert at LBBW, a change in investors’ expectations of Fed rate hikes seemed to show that the expected recession could be short.

“It was a very interesting day. A week ago, the market saw overnight (Fed) rates peaking at over 4% on the 3e quarter of 2023. Now he sees them rising to 3.5% with a peak at 1is quarter of 2023,” noted the analyst. Investors were therefore expecting a faster rise in rates over time, corresponding to a shorter economic slowdown.

European gas up, oil down

The reference price of natural gas in Europe, the Dutch TTF, took almost 2% to 130 euros per megawatt hour (MWh) after Germany’s decision to activate the “alert level” of its gas plan.

Crude oil prices failed to stabilize after their plunge the day before, also penalized by fears of recession and demand for black gold. The barrel of Brent for delivery in August dropped 1.51% to 110.05 dollars and that of American WTI at the same maturity concluded at 104.27 dollars, dropping 1.80%.

Bank stocks suffered in particular from the decline in interest rates on the bond market. Societe Generale lost 5.51% and BNP Paribas 4.69% in Paris, Barclays 4.50% in London.

In Germany, Commerzbank and Deutsche Bank fell around 12%.

The Italian bank Monte dei Paschi di Siena (BMPS) has announced that it is launching a capital increase of 2.5 billion euros in order to strengthen its equity and finance its new strategic plan 2022-2026 which aims to increase its profitability and reduce its costs. The stock fell 2.93%.