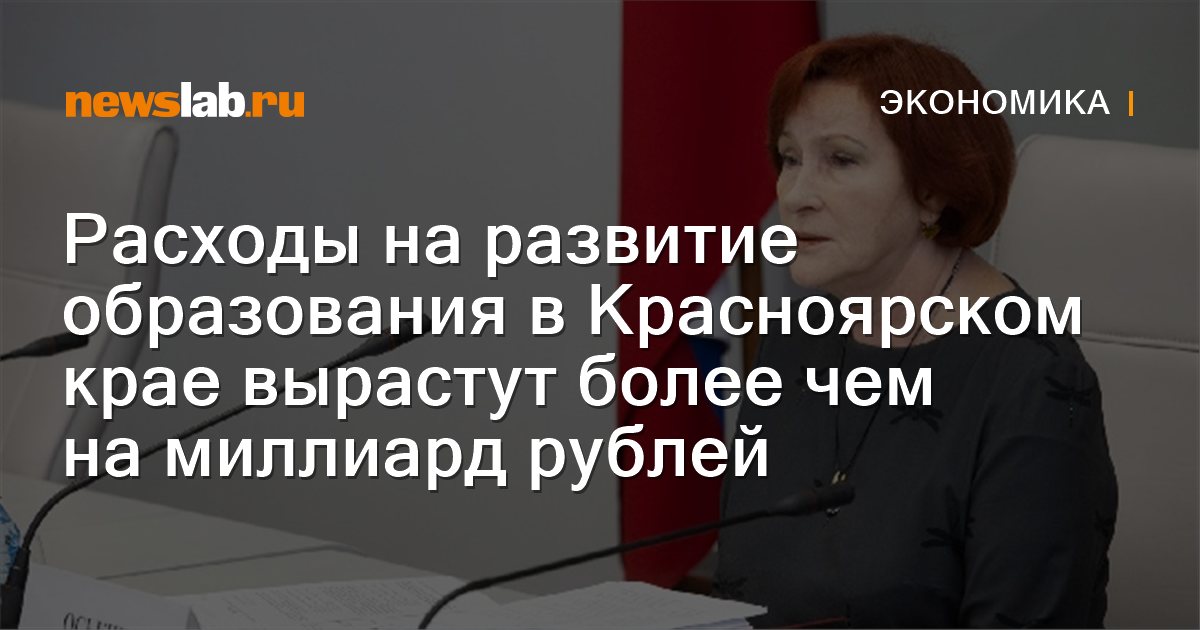 The Legislative Assembly of the Krasnoyarsk Territory began work on the traditional budget adjustment. The Committee on Education and Culture under the leadership of Vera Oskina discussed the increase in spending on education, according to the telegram channel “Parliament on the Yenisei”.

The Minister of Finance of the region Vladimir Bakhar told the deputies that part of the funds will be sent to contractors to compensate for the cost of building materials during the construction of schools in the Bugach microdistrict of Krasnoyarsk and in the village of Mokrushinskoye, Kazachinsky district. For 2023-2024, funds were allocated for the creation of additional places in general educational organizations. These are two new schools – in Sosnovoborsk and in the Metrostroitel microdistrict of Krasnoyarsk. All these expenses will be financed from the federal budget. In 2022, they will amount to 46.7 million rubles.

It is planned to add 1.1 billion rubles from the regional budget for education. 230 million rubles of them will go to increase the cost of food, in accordance with the increase in consumption rates for various categories of students and inflation. Expenses for providing children with clothes and footwear in orphanages and cadet corps will increase by 50 million rubles. 184 million rubles are planned for additional hours of extracurricular activities. To ensure the overhaul of schools in 2022, another 77 million rubles will be allocated due to the rise in the cost of construction work and materials.

The minister also spoke about changes in the state program “Development of Culture and Tourism”. The total increase for 2022 is almost 500 million rubles, all of this comes from the regional budget. 190 million rubles of them are intended for holding various cultural events, for example, the Dmitry Hvorostovsky festival and the celebration of the 200th anniversary of the Yenisei province. Many cultural institutions will receive additional funds, for example, almost 38 million rubles will be allocated to the Opera and Ballet Theater for the creation of a new production – the opera by P.I. Tchaikovsky’s “Oprichnik”, and the musical theater will receive 143 million rubles for the reconstruction and lighting of the facade, the arrangement of the central entrance.

See also  An exclusive live stream of ballads and musical concerts by Junsu on U-NEXT from December 17th for 3 consecutive nights! --Kstyle

When discussing the draft law “On Amendments to the Law of the Territory “On the Regional Budget for 2022 and the Planning Period of 2023-2024”, deputies Dmitry Dmitriev and Natalya Pyzhikova, committee chairman Vera Oskina were interested in the construction of new schools in Krasnoyarsk and in the Yemelyanovsky district, the preservation of cultural heritage, renovation of cultural institutions. The deputies will send a proposal to the relevant committee to submit a draft budget adjustment for the next session and consider it in two readings.

Member of the Legislative Assembly of the Krasnoyarsk Territory

Minister of Finance of the Krasnoyarsk Territory

Member of the Legislative Assembly of the Krasnoyarsk Territory, ex-head of the Soviet District of Krasnoyarsk

Member of the Legislative Assembly of the Krasnoyarsk Territory