There are images that strike the heart, shake the soul. Then there are souls who move the world and turn it upside down even in the whirlwind of a storm.

The images that hit the heart are those of the column of army wagons carrying the coffins of the dead of Covid in Bergamo. An immense soul is that of Ladina Durisch. An all-round artist, a very talented painter based in Zurich, who in the face of that tragedy decided that she would not remain helpless. It was clear to her that she would not remain idle in the face of that trial that was bending the Bergamo community. He promoted exhibitions, invited other artists to see their works, held concerts and opened a subscription, raising 102 thousand Swiss francs, (90 thousand euros ed). Last October she was in Bergamo and donated the sum to the Waldensian Church. The Caprotti Zavaritt nursing home in Gorle benefited from that sum, with various acquisitions and projects, such as the purchase of mobile phones and tablets to allow guests to communicate with their family members, a telephone and psychological counseling center was opened. a sanitizer was installed at the entrance of the structure.

Wednesday 9 June is Ladina Durisch’s birthday. As a sign of gratitude and gratitude we have decided to tell this story, because even in the deepest despair there is always a mystery that saves man. In this case she has the wings of the art and music of this generous and great Swiss artist.

Ladina Durisch, what did you feel, what was your emotional reaction to seeing the images on television in March 2020?
For me it was a huge shock, I knew the pictures of Wuhan, I knew there was the coronavirus on television. But the shock had been so strong for me because that terrible situation had come so close and there was only the Gotthard between Northern Italy and Switzerland to divide us. I realized how close that immense drama was. And I can only say that it was an incredible shock to see those images, I felt an incredible emotional participation in me, I was infinitely sad. For me it was one of the biggest catastrophes in my life and it was so so close. We hear so many things every day. One is hardened by the bad news, usually these tragic events are very far away, but there I was struck by the small distance with my life here in Switzerland. And those infinite deaths, that infinite number of human destinies and families affected.

See also  They insist which concerts should be suspended - Nationals

What did he decide to do?
I come from a family, in which my father was from the Canton of Grisons while my mother is from the Canton of Ticino. Very close to northern Italy. I am a person who feels incredibly strong empathy when someone is sick. From the age of six I have intensely felt what is happening around me and what was happening in your land also struck me physically, I had real pains in seeing that emergency in Italy, in Bergamo. It wasn’t that I wanted to “help”, I had to do it! It was a necessity. I felt I wanted to intervene, change something, even in my small way: above all I wanted to help single families, single destinies, with concrete help.

see all the photos

The works of Ladina Durisch and the gift to Bergamo

Did you know Bergamo?
For my work as a painter I have often been to Venice and usually I made trips in which I visited single cities and countries. Bergamo had been one of my destinations, I had lunch and even slept there. I don’t know if I can say that I know Bergamo, I was a tourist who had touched your city. I have contacts with the Grossmuenster Church in Zurich and I simply tried to talk to the sacristan, then to the pastor and in this way a wonderful constellation was created: the pastor of the Grossmuenster knew the Pastor Winfrid Pfannkuche of Bergamo and put me in contact. A wonderful contact! I would like to specify that I used art, exhibitions and concerts as occasions to celebrate, for example, birthdays, parties with the idea that participants would give up gifts, to make donations instead to those who needed them. So I was able to collect 102,000 Swiss francs (90,000 euros ed), among my acquaintances with whom I opened a subscription. 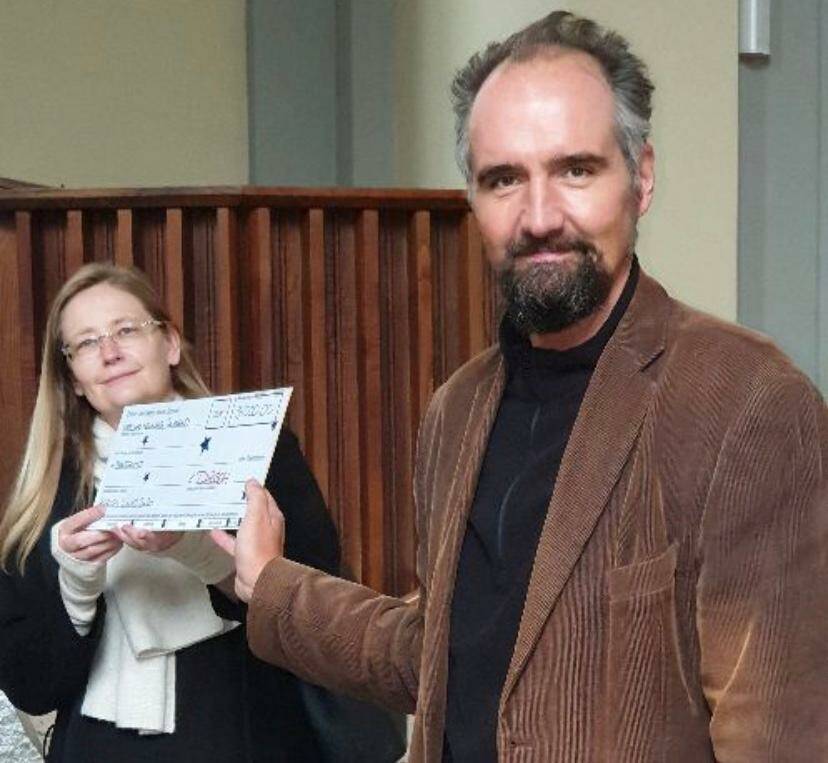 After her fundraising, she personally came to Bergamo in October 2020 and generously delivered a large sum that helped the most fragile people of the Caprotti Zavaritt nursing home in Gorle. What memories do you have of these days and of the people you met?
First of all, I must say that I arrived in Bergamo and immediately felt an incredible anguish. One felt the deep pain of the people, tried by the tragedy. It could be read on his face. I talked to people, I was sitting in a cafe, you could be outside. And I felt, but also heard, that the fear was at a deep level, in everyone I saw and observed. I was received in a very very cordial way by Pastor Winfrid Pfannkuche, in the Waldensian Church of Bergamo. I had a wonderful meeting: I handed over a large check and some documentation. I received a very warm welcome, but even in the church, I could only speak with him. There was a great fear, a breathlessness, an unhappiness. People were truly shaken by that terrible disease and its aftermath.

Have you experienced the proof of the disease on your own skin and in your life?
Unfortunately, since I was 20 I have been put to the test by various diseases: first of all cancer, then a very strong virus that for 30 years has made my life a bit like hell, with very strong pain and once a month gives me a high fever. I also had small cerebral ischemias, some of which were transient. This is because I got intoxicated with the colors I use to paint. I am missing a gene that is supposed to expel toxic substances from the body.

Has he developed an antidote to defeat her?
My antidote is the joy of life, it is very very very important that we move forward. Enjoy life, despite the disease that affects us. A great antidote, however, was self-healing, which I learned from a healer at the age of 20. One goes deep into the belief that one can defeat disease, even cancer. You visualize yourself healed, I have learned to do it and this has led me to continue on that path. So I’ve never lost the joy of living, because I’m sure you can help yourself. This gives me great awareness, but now I am in a situation, in which I can no longer succeed alone. For the first time, I need traditional medicine. Even now, however, I must say, or rather I can say, that I would like – even with the help of painting – after this heavy phase, to take my life back in hand.

How important is art in life?
For me, art, music, painting are like food for the soul. I can say that painting and playing set my joie de vivre in motion, if I can paint I know I’m fine. Since I had a brain tumor at the age of twenty, painting has always been a great gift. In painting I realized that, despite the many diagnoses, I was very healthy, that I could feel healthy. Music gives me wings in an extraordinary way, it brings me back joy when I am downcast. For me they are soul food and healing. What matters a lot, however, is also the family. For this reason I looked after my parents to the end. The family gives, or at least to me, gives and has given a lot. Of course now I get a lot from my daughter.

Do you paint on large canvases? Where does this need for large spaces come from?
As for my need to paint big: I happened to paint on commission a copy of Leonardo da Vinci’s Last Supper four meters by two and I discovered the satisfaction of painting big. Currently my paintings are very very large and this is because I give vent to painting. Despite my health conditions I am very happy on a ladder or mezzanine. It gives me joy to be up there and start painting in a corner or in the center and then proceed. When I paint I am very fast, I love big movements and it is also good for me physically.

In the most difficult moments we discover generosity, now that the worst seems to be behind us, do you think the man will be able to review his way of life?
I must confess to you with regret, and I am convinced, that at the end of all this tragedy people will have learned nothing. In my life I have constantly observed, that when you are sick, but also when you are close to the fate of other people who are sick, you are very very shocked, even for a long time. Unfortunately, however, in the speed of our world, with the Internet, television, news (within seconds, an email is sent to America), I feel we have so much to know that we are all overloaded with information flows. I think at this moment we are all, all over the world, shaken. But even now I see a tendency to forget in Switzerland. You act as if nothing ever happened. I believe in northern Italy it will take longer. Northern Italy was hit harder than Switzerland. But I think that in Bergamo too we are returning to normal. There was mourning for the near and less close victims, but it is quickly forgotten. Unfortunately, I must say that human beings learn too little, unfortunately! ”.