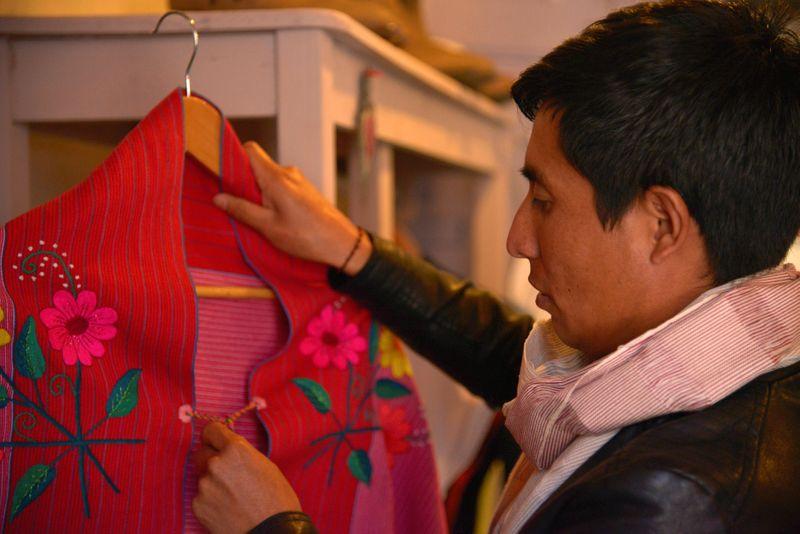 SAN CRISTOBAL DE LAS CASAS, Mexico (Reuters) – Indigenous weaver and fashion designer Alberto López knew that he wanted to be a traditional weaver from the beginning, but there was a problem: the artisans who worked on the looms of his village in the lush mountains from southern Mexico they were all women.

Undeterred, Lopez, a Mayan Tzotzil, convinced his mother to let him get away from the cornfields, the expected place for men like him, and embrace his passion for making traditional embroidered blouses known as huipiles and other garments.

“I am doing what I want to do, representing my people, and especially my female colleagues,” the 31-year-old woman told Reuters.

Later this month, Lopez will show his art at a conference at Harvard University and then at a show that celebrates the indigenous style in New York on the eve of Fashion Week, where superstar designers like Tom Ford and Vera Wang promote their new lines.

He explains that huipiles, traditionally for women, but a garment that he also likes to wear, can take up to a year to manufacture and require meticulous attention to detail.

Work may also require a type of dialogue. ” Sometimes I have a conversation with my threads. I feel that the thread also feels what you are doing, “he said.

With a smile of complicity, he adds that he does it when there is no one else, especially when the thread is being difficult.

Lopez attributes his American invitations to a viral video of a German documentary last year, and said he had to fight to get a passport and a visa to make the trip.

“I will explain the worldview behind each garment,” he said proudly.

The name of his shop, Lopez’s K’uxul Pok huipiles collection will be shown at the show “American Indian Fashion Through the Feathers” in New York on February 2, days after he speaks at a thematic conference in Mexico at Harvard.

Where to see Ariel, Snow White and more Disney cameos in the movie

Meet the Bachelor’s singles Listen to your heart

Rabbi of Jerusalem jailed for keeping 50 women in conditions of...

Eight out of every 10 Democratic primary voters in New Hampshire...

The United States faces a ‘Great game’ against China in Central...

Michelle Williams is pregnant and engaged to the director of Hamilton,...

Mark Cuban and Ryan Seacrest think that Harry and Meghan could...

Elsa Pataky moves from Hollywood to Byron Bay and motherhood in...