The quality of life of a city is calculated on the basis of many factors, one of which is certainly the animal welfare pet. An indicator that concerns, in equal measure, the cute four-legged friends and their owners. Thanks to the increase in adoptions of about 15% in the pandemic period, people are increasingly careful to evaluate how much their city is Pet Friendly.

In Avellino they are counted 5500 registered in the canine registry of the ASL, all equipped with microchips, to which are added another thousand with only tattoos, then completes the total count a few hundred owners who have not yet taken steps to register their trusted friends in any way. But how ready is our city to meet the needs of dog owners?

We have tried to answer this question by analyzing the quality of minimum and indispensable services to ensure that each owner does not experience the company of his animal as a burden, which too often is relieved by the cruel practice of abandonment.

In town i containers for manure I’m 57, a figure that compared to that of other realities is not so bad: let’s think of Barletta which with about 92,000 inhabitants has 72 or Tivoli, where there are 35 containers for 56,000 inhabitants. On this issue it is good to make a clarification: in addition to the collection devices, citizens must be made aware of their use. This is why, if on the one hand there are never enough containers and it is good to always add new ones, on the other it is important to make it clear that they represent one of the few remedies to the little-loved sport of slalom between excrement on the pavements.

Even the walking areas they are fundamental places for the socialization of dogs, but also for those who take care of them. It is precisely here that citizens confront each other on problems and solutions with respect to the leash routine. Avellino counts 3: that of Via Morelli e Silvati – at the gates of the Valle district – that of via Giovanni di Guglielmo, crossing with Via Oscar D’Agostino and finally that of the Santo Spirito park which has numerous shortcomings, already described in a previous article. At the end of the day, more than three are actually two and a half walking areas. We therefore deduce that for i about 7000 dogs present in the city , the spaces where you can see them splash here and there with dangling ears and tongues in the wind, are a bit small. All the more so if we take into account the availability of numerous abandoned green areas in the city, which could be very useful for this cause.

The entrance to the walking area of ​​the Santo Spirito park

So far we have analyzed sports and public baths, but what happens when we try to observe the structures that should guarantee fundamental and civil rights for the canine people of Avellino and for those who take care of them? It happens to see an old and troubled speech come back into vogue: Avellino does not have a municipal kennel.

A topic that might seem not a priority, in reality there has been no electoral campaign in which the mayor Festa has not included it in his program. It starts already in the 2013 municipal elections: “We will create an inter-municipal park-shelter for animals, not conceived as a desolate concrete structure, but must be seen and experienced as a place where meadows and trees prevail over the built in order to guarantee the best animal welfare possible “, up to more recent times, for example a few days before the ballot in the 2019 elections:” We want to create a structure surrounded by greenery that can be a shelter for animals and a picnic area for citizens ” .

Surely we can give the Mayor the mitigating circumstances of a difficult period caused by the Covid emergency, which left little space for other issues, except for Fuksas, Dinopark, new stadium, market and parking lots of the Municipality serving the pedestrian areas. Including a kennel among these priorities is not only a question of protecting the rights of animals, but above all a way to combat stray dogs and therefore make the city safer for all inhabitants, even for those who do not own an animal. Scenes such as those of the roundabout in Piazza Kennedy – invaded by large dogs, without owners and bewildered – are increasingly frequent. The discourse of civilization is therefore accompanied by that of prevention with stray animals, which becomes a question of urban safety. 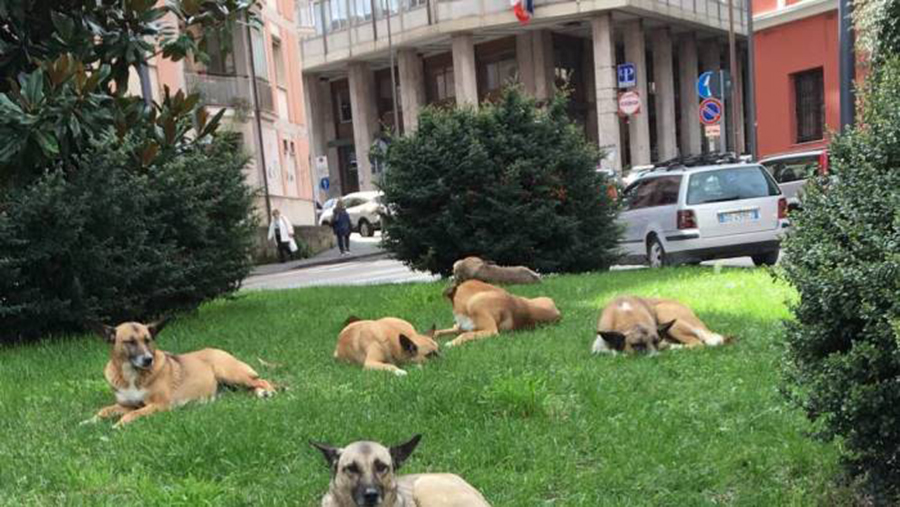 Stray dogs in the roundabout of Piazza Kennedy

The lack of a city structure forces the administration to contract out the service. Since the time of the Galasso junta, the reference structure for Avellino is the famous and controversial one kennel of Brusciano. A concentration camp for volunteers and animal welfare associations: an acceptance also attributed to it due to a past made up of Nas controls, closures and criminal convictions. While for the Municipality of Avellino and for the Traffic Police it is a structure in compliance with the obligations imposed by the tender specifications. Certainly the construction of a possible municipal structure would bring several benefits: the institution would no longer have to pay a third party for the service, the city would enjoy rapid interventions, where stray dogs could become a danger, but above all the conditions of the animals housed. could be monitored more easily.

The hope is that a solution will soon be identified, because such a lack strongly clashes with the figure of a First Citizen raised politically in the Green Party and with a regional councilor elected right from the ranks of the Animalist Party.

Perhaps an incentive to improve the management of animals could be the possibility of generating an economic result for the capital, which derives precisely from a positive evaluation of the welfare of animals and their owners. In this regard, the annual ranking of Legambiente – Animals in the city – also includes the most Pet Friendly municipalities in Italy, which become the tourist destination of choice for those who do not want to part with their four-legged friend on vacation.

Let’s think about it, the future does not pass only through streets paved by archistars.