Lapo resting on the shoulders of his master, Luigi Aganetto 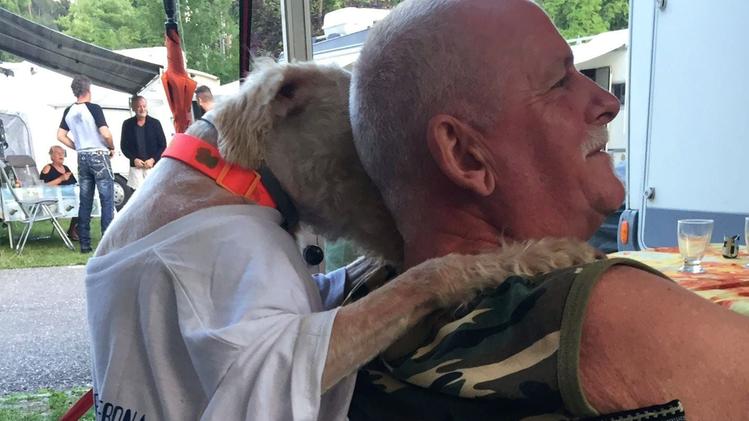 Lapo resting on the shoulders of his master, Luigi Aganetto

They beat the dog Lapo to death in the middle of the night. Maybe out of boredom. But there are those who say among the witnesses that they were drunk. It is not known how many shots they threw at him. We don’t even know who they are. We only know that Lapo had a day long agony and stopped making the life of his masters more joyful. Forever. It happened in Grezzana around two on Sunday night. On Tuesday morning Lapo, a Lagotto breed, was no longer breathing. He found Luigi Aganetto, his master.

The voice of the couple breaks even as they tell the absurd end of their dog. But they certainly don’t give up. They’ve already had their dog do an autopsy. “The veterinarian”, says Daniela Vicentini, “told us that it is as if Lapo had been hit by a car at high speed”. And, instead, they were beaten. Then yesterday afternoon, the couple, residing in Verona but with the dog kept in Grezzana near the house of a relative, went to the carabinieri to present the complaint. “There are cameras near the house,” says Daniela. And she hopes in those images to discover who is responsible for so much, absurd ferocity. It is two o’clock in the morning on Sunday in Grezzana. We are in via Padovani. A group of people, perhaps young people, are walking, speaking aloud in the Veronese dialect. The dog hears them. Maybe he gets scared. And it barks. It must mark its territory.

See also  “The dog barks all day at all hours. I once slept in the cellar so as not to hear it. I'm exasperated ”- Targatocn.it

“My brother-in-law lives in front of Lapo’s enclosure and he heard it,” reveals his mistress, “he went out onto the balcony, turned the light towards the group of people on the street and so they moved away.” But they are back. They took advantage of the darkness. This time they did everything in silence. «My husband had left a stick in the fence», Vicentini reveals again, «the next morning he found it in a different place than where he was a few hours earlier». The attackers entered the compound.

Child’s play: the gate is only one and a half meters high. They stepped over him, grabbed the stick and started beating Lapo, “guilty” of having barked on their first pass. One, two, three hits and who knows how many more times until the dog started to yelp, desperate. It was that faint lament that reached the ears of Vicentini’s brother-in-law again and woke him up. He came out of the balcony again: “he only had time to see the group of people running away, perhaps to reach their motorcycles.”

The brother-in-law got out, went over to the dog, was still whimpering, stroked it, then Lapo also stopped complaining. But it was only the beginning of a long, terrible agony. “The vet explained to us that dogs are subject to a slow death,” Vicentini says and his voice breaks. On Monday morning, Aganetto was there in Grezzana dal Lapo of him like every morning. He tried to pet him but the dog pulled away. “It was as if he were asking us with his eyes not to touch him,” continues her mistress.

See also  School with a difference: when a dog helps out in class

They fed him. But Lapo, four, hasn’t even come close to the bowl. He hasn’t eaten anymore. The brother-in-law also tried to refresh him in the late afternoon. But his heart was failing and his appetite was gone. “The next day he was gone” is the terrible ending of this bad story told by the owners. He had a pulverized spleen, it will then be the diagnosis of the vet. The beatings caused Lapo to bleed internally. Slow, inexorable. «A terrible death», Vicentini concludes, «now those responsible have to pay. He was a very good dog. He never barked. He loved being pampered. He didn’t have to die like that. ” No, he didn’t have to.