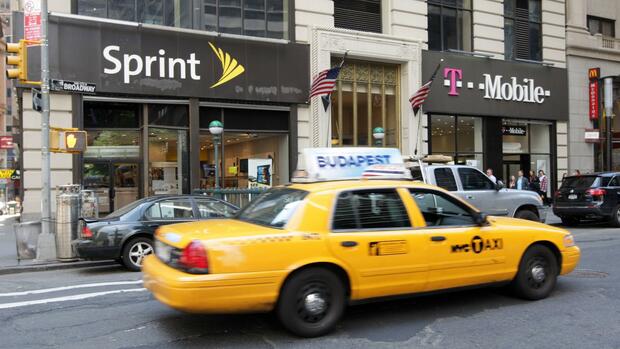 New York, Dusseldorf After more than two years, Deutsche Telekom achieved its greatest victory in the United States. The merger of their mobile subsidiary T-Mobile US with rival Sprint was sealed on Wednesday. The last steps were anything but easy, Telekom head Timotheus Höttges told Handelsblatt. Due to the outbreak of the corona virus and numerous travel restrictions, the negotiations on the last details by video conference had expired. At the end there is agreement.

The merger creates a powerful player in the American mobile market. The new T-Mobile is expected to have a market cap of around $ 110 billion more. As of the end of 2019, the total number of customers of both companies was $ 140 million and sales of $ 77 billion.

However, the great value from the merger is at a different point for Telekom. Sprint has important cellular frequencies. In one fell swoop, the combined company can secure a frequency spectrum that is around twice as large as that of its rivals AT&T and Verizon. More spectrum means that existing cell towers can deliver better performance.

T-Mobile also has access to Sprint’s mobile phone locations. The higher density of locations is particularly important for the next 5G mobile communications standard, which T-Mobile is the first provider to roll out nationwide.

In the past, analysts have repeatedly voiced concern that Sprint may have glossed over numbers and exaggerated the scale of its customers and business. At the press conference in mid-February, Telekom CFO Christian Illek admitted that the Dax group would only get a full overview of Sprint’s business once the merger was completed.

However, access to Sprint’s spectrum and locations is secure. And above all, it feeds the expected synergies of $ 43 billion after deducting costs.

Two years ago, the telecom management around Timotheus Höttges had discussed the details of the deal with Sprint owner Softbank. But a lot has happened since then. T-Mobile had more than one million new customers every quarter. Sprint, on the other hand, got into new difficulties.

Telekom chief negotiator and board member Thorsten Langheim used the situation to improve the conditions for the merger by about five billion dollars at the last moment. Softbank is under pressure due to a number of difficult investments – including the collapse of the IPO of the co-working provider WeWork.

Telekom now wants to get started in the United States. “We can become number one on the market,” said Höttges. So far, T-Mobile has been ranked third in terms of market share in the USA. Now the merged company catches up with the industry leaders AT&T and Verizon.

Despite all the successes, Telekom is also taking a risk. Actually, two approvals are still pending. All federal authorities have agreed. But the judicial approval of the decision of the antitrust authority, the so-called ‘Tunney Act’, is still missing. This is a law that requires a court to approve decisions by the Department of Justice in the Department of Justice.

The California Public Utilities Commission (CPUC), the California public utilities regulator, had also made the merger conditional. There is still no agreement with the state authority.

However, the telecom management decided to complete the merger. “We have received all important permits – including from the state of California,” said Höttges. He was sure that there would also be an agreement with CPUC. But the decision was made to stop the completion of the merger due to the negotiations.

On March 11, the CPUC announced the conditions under which it would approve the merger. Formally, 30 days would have to elapse afterwards for the parties to express themselves. Only then will a five-member commission make the final decision.

The authority had tied its approval to certain conditions such as minimum coverage and minimum speeds, but also preparedness in the event of a disaster. That would be affordable for Sprint and T-Mobile, but expensive.

T-Mobile, on the other hand, had always argued that the CPUC was not responsible for the merger. The merger of the companies forges a mobile communications group, and the authority is actually primarily responsible for the topic of fixed networks. However, Sprint has a small landline business in California.

T-Mobile and Sprint had already cleared the most important hurdles in advance. Among other things, the Ministry of Justice and the FCC telecommunications regulator had approved the merger. So that consumers can continue to choose between four mobile operators, Sprint must hand over its prepaid licenses to the television satellite operator Dish.

Dish also gets cheap access to the new T-Mobile network. So Dish should be able to build a powerful competitor.

The merger comes at a time when the corona crisis is overshadowing everything in the United States too. T-Mobile had originally planned to replace the Sprint store signs with the magenta T-Mobile signs everywhere on the same day of the agreement. But now almost all shops are closed.

Most people are currently at home in the United States, and the four mobile operators to date are outdoing each other with actions to help Americans stay in touch. They offer unlimited data volume for most contracts. T-Mobile has also launched a cheap $ 15 offer and is giving its customers YouTube Premium for free.

Outgoing CEO John Legere has withdrawn to his home office in a magenta look, celebrates World Doctors Day and calls on people to stay at home. He also has T-Mobile donate to charities such as “Feeding America” ​​that brings people food. His youngest slow cooking stream took place on Sunday.

From T-Mobile’s perspective, the effects of the corona pandemic are both a risk and an opportunity. Initially, the merged company is likely to be hit by numerous payment cases from its customers. T-Mobile as well as Sprint had repeatedly made offers aimed specifically at customers with a lower budget. Therefore, the effects of the layoff crisis could be greater than AT&T and Verizon.

The fact that the shops of the telecommunications companies are closed also means that fewer customers are allowed to change their tariffs. A huge rush of Sprint customers who want to know the details of the transition quickly could now be less. In addition, a short-term migration to AT&T or Verizon is slowed down. T-Mobile should have more time to ensure that the merger runs as smoothly as possible for its customers.