“You can’t go outside in light-colored clothes in winter – then you have to wash it with bleach. All shoes are covered in white marks from these reagents,” residents of Moscow and the Moscow region complain on social networks. What reagents are now treating the roads of the region and whether they are dangerous, the RIAMO observer found out.

From sand to combined reagents

During Soviet times, capital roads were treated with a mixture of sand and technical salt. However, sand, which accounted for about 90% of the mixture, clogged sewer drains.

Since the mid-1990s, only technical salt has been poured onto the roads of Moscow in winter. This led to unpleasant consequences: on the roadside territories, plants began to die due to salted soil.

The search for the ideal “formula” continued until 2011, when the document “Winter Cleaning Technologies” was approved in the city. Since then, Moscow roads have been treated with combined reagents – they not only have an anti-icing effect, but also make the road surface rough. Combinations of table salt, calcium chloride and biodegradable salt – sodium formate – are used by humans in the cosmetic, food and medical industries.

“Any substance used regularly, even ordinary water, can harm the environment. However, in recent years, the capital has managed to find a balance between road safety and the well-being of nature – here they use multicomponent reagents containing several salts, including organic ones, which decompose under the influence of sunlight into carbon dioxide and water, ”says Anna Klimentova, head of the apparatus National Winter Road Maintenance Association.

According to the expert, modern technologies also help to reduce the amount of anti-icing agents used. For example, electronic dispensers on machines that sprinkle reagents on roads allow you to distribute from 10 grams of a substance per square meter – about as much as a teaspoon can hold.

“Sidewalks are sprinkled with material consisting of 70% marble chips. When it enters the soil, it improves its air exchange, serves as food for beneficial bacteria. According to the state environmental monitoring, the level of soil salinity has decreased by more than three times over 10 years – just like the “icy” injuries of pedestrians, ”adds Anna Klimentova.

Although the aggressiveness of the reagents has decreased, the expert believes that it is impossible to transfer snow with anti-icing materials to lawns, since it is contaminated with the remains of road estimates from vehicles. Snow must be collected and transported to special complexes or snow melters. 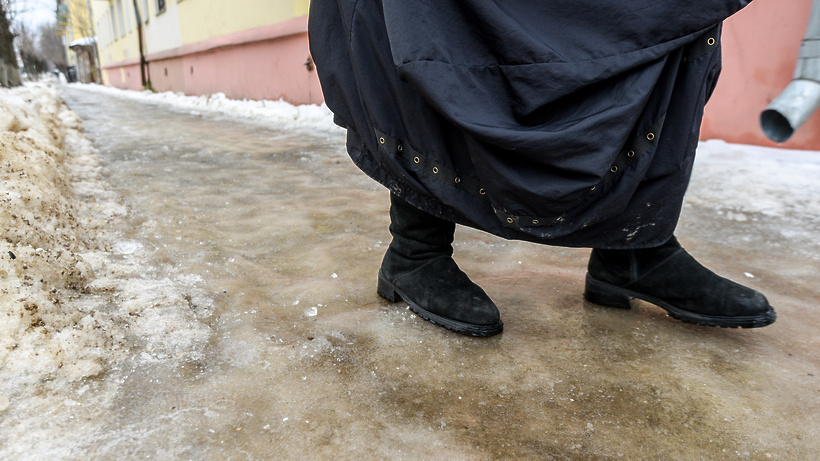 In winter, white stains can often be found on shoes. “These are all chemicals,” many people used to think. Shoe maker Zaven Khachaturyan said that de-icing agents rarely negatively affect shoes.

“If you wet leather shoes at home and then set them to dry, white marks will also come out. The reason is that the salt comes out of the skin itself,” said the master.

According to Khachaturian, at one of the stages of dressing, the leather goes through the process of alumation – it is soaked in a special solution containing table salt.

“The faster you need to make shoes, the more salt goes into the solution. If the production technology is followed, a very small amount of it remains in the finished product, but now the work is done poorly, ”Zaven shared.

The master added that the reagents do not affect the glue and do not lead to the destruction of the boots, unlike moisture and improper care.

Zaven Khachaturian also gave some advice. In winter, you need to start caring for your boots as soon as you return from the street.

Shoes should be cleaned of dirt – wipe with a cloth dipped in warm water. After the shoes should be left to dry at room temperature, having pulled out the insoles in advance. Heavily wet shoes should be stuffed with paper – this will help maintain their shape. Dry shoes should be treated with water-repellent agents.

If the shoes could not be cleaned immediately after returning from the street and stains appeared on its surface, the shoemaker recommends trying to wash them with warm water. With a strong plaque, a cotton pad moistened with alcohol or baby shampoo can help. A rubber shoe brush will help brush the salt off the suede.

Where to complain about ice and icicles in Moscow>>

Walking on snow treated with an anti-icing compound can end badly for pets.

“Particles of salt scratch the paw pads, which causes microcracks. Consequently, during the next walk, this salt gets into the cracks and causes irritation and pain,” says Tatyana Vasilyeva, veterinary assistant at Aibolit Krasnogorsk LLC.

However, not only the paws of animals suffer. If the dog rolls in the snow, the reagents that get into the coat can cause skin irritation, an allergic reaction. When licking contaminated surfaces, according to Tatyana, the animal may experience intestinal upset.

“Unfortunately, such cases do happen in practice. In addition, not all owners attach importance to the problems that arise when salt is exposed to the paws, but simply wait for all the symptoms to pass, ”adds the paramedic.

According to statistics, dogs of small breeds are more likely to suffer from reagents, but with large dogs, such as, for example, Newfoundland, unpleasant stories also happen.

“One of the graduates of our kennel ended up with a finger amputation. First there was a burn, then an infection. There are also very sad stories with a fatal outcome. A dog can eat a large amount of toxic substances along with the snow, which can lead to severe poisoning. This happens in very young or elderly dogs with fragile immunity,” complained Maria Lapina, breeder and owner of the Terra Victoria Newfoundland kennel.

To protect your pet, you need to follow simple rules: wash his paws after walking, teach small breed dogs to wear shoes in winter, walk where anti-icing substances are not poured, use special wax for paws before walking.

If the reagents have caused injury or severe irritation, you should contact a specialist.

“Why don’t they shit on the floor at home?”: Muscovites about what dog owners piss them off>>