Coronavirus in Brazil: football stadiums as a field hospital – sport 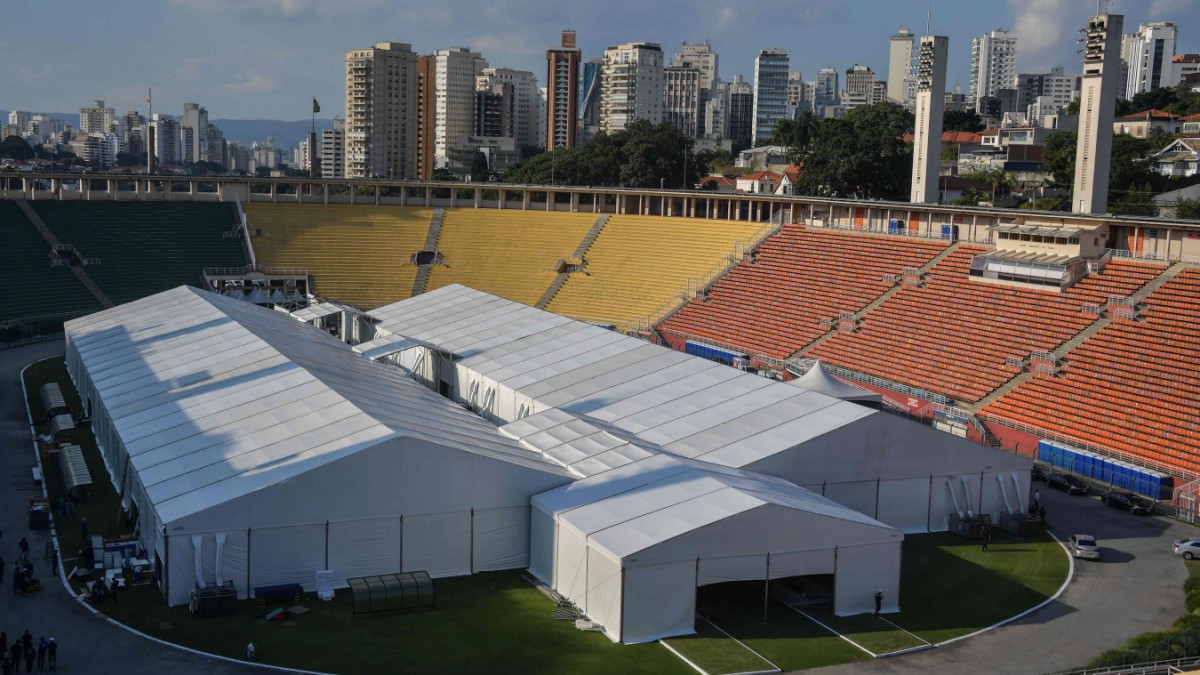 At first glance, it may appear that Jair Bolsonaro wants to bring some entertainment to Brazil, which is largely quarantined, a country that has fundamental problems with any kind of movement restriction. There was this press conference about two weeks ago. Bolsonaro sits on the podium with some of the still healthy members of his thinned out staff – and puts on a show with the face mask that would be a credit to any Loriot double. He pulls and tugs at the white cloth that sometimes slides over the eyes of the fumbling President to snap suddenly over the face in the next moment, finally dangling from his right ear. Only the mouth and nose, where protection belongs, is rarely covered. The pictures went viral, Bolsonaro sparked a veritable laughing epidemic across the country.

In fact, this is one of the biggest problems in Brazil: the involuntary clown is the first man in the state. In a country where he has the same kind of demonic-silly appearances as his alter ego in the United States, Donald Trump, and that is now leading to a huge health crisis. The Corona virus does not exist for Bolsonaro. The populist publicly dismisses the pandemic as “gripezinha”: light flu.

So he recently urged the national football leagues to start operating again. And he made what he thought was a generous concession: Because of the risk of infection, you could make sure that only ten percent of the audience capacity actually envisaged was let into the stadiums.

The majority of the 20 first division clubs and most regional politicians have not responded to this advance. The scenario is too bleak; Expert studies such as the “Global Impact of Covid-19 and Containment Strategies” by Imperial College in London predict up to 1.1 million deaths in Brazil if no precautions are taken as quickly as possible. And so, while the president wants to play, more conscientious officials have found meaningful use for the legendary sports arenas. The first are currently being converted into hospitals, especially at the hotspots of the pandemic: in the world cities of São Paulo and Rio de Janeiro, in the northeastern coastal city of Fortaleza and in the capital city of Brasília. In front of Bolsonaro’s front door. But not even the man behind the screen can prevent that: As in the United States, the fifth largest country in the world has primary responsibility for disease control among state governors and prefects.

Brazil’s health system is miserably prepared for the crisis, and there is a particular lack of intensive care. Now that is changing Estádio Nacional Mané Garrincha in a provisional care facility in Brasília. The huge, almost half a billion euro bowl with a capacity of 70,000 spectators was built for the 2014 World Cup, and a quarter-final of the men’s and women’s Olympic football tournament was also held there in the 2016 Summer Games. But in everyday life only subclass clubs of the region kick in the Garrincha Arena. All the business games that had been advanced at the time, in addition to top games from the top league and regularly luring the superstars of the pop and rock world to open-air concerts in Brasília, were never followed seriously. But now this monument of another national sport, the waste of public funds, is of unimagined importance.

Like that Estádio do Pacaembu in São Paulo. A white tent village now stands on the area on which Pelé, the largest national football icon, for whom FC Santos scored a large part of his more than a thousand goals including the last one in league operations. The emergency hospital with 202 beds and a quarantine station was to be put into operation on Tuesday as a reception point for less serious cases. The construction work had taken only ten days.

A pharmacy is installed in the changing rooms

Things are moving less quickly in Rio, where the whole Maracanã-Complex including athletics trail and water park is available. Embedded in it is probably the most famous stadium in the world, which, among other things, hosted the two World Cup finals in 1950 and 2014 and, of course, also the Olympic women’s and men’s finals in 2016. Where exactly the provisional hospital will be installed and how many beds are available should be clarified.

In Fortaleza, whose beautiful beaches have been deserted since March 20, Mayor Roberto Claudio has a hospital in the Presidente-Vargas– Set up the stadium. The state of Ceará complains of several hundred cases, the prefect himself has been infected. The new provisional is said to have 204 beds, divided into 17 stations, and will go into operation on April 20. If necessary, the internment beds should be upgraded to intensive standard including ventilators; A pharmacy will be installed in the changing rooms.

The majority of politicians, the judiciary and even the half-silk soccer cartridge have recognized the deadly danger and are fighting against it. The clown in Brasília, whose disinformation campaign “Brazil must not stand still” was recently even banned by court, may soon swallow his respirator.

Share
Facebook
Twitter
Pinterest
WhatsApp
Previous articleThe precious gesture of Los Secretos by donating all the rights of “But by your side” to Madrid
Next articlethe “doctor-validated” rumor trap
Save 60.0% on select products from SAMMIX with promo code 6018YMV7, through 4/25 while supplies last.