Coronavirus: Drinking canes or working: the ‘apps’ of group video calls with which to maintain social life | Innovation 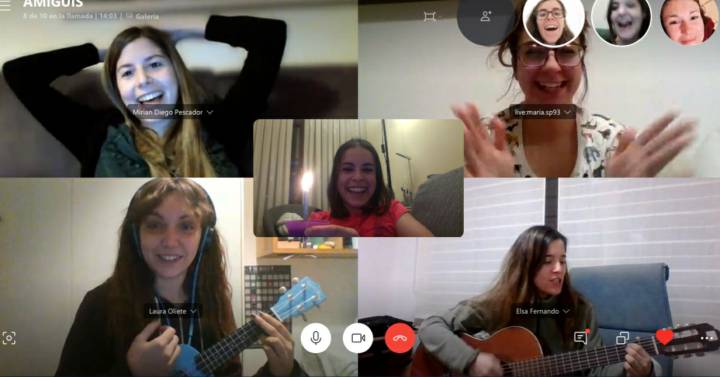 Last Saturday Raquel García Chico had a birthday in Salamanca. Her friend Rocío was 27 years old. They were going to party to celebrate. But his plans were truncated before the advance of the coronavirus in Spain. The authorities asked the population to stay home to stop the contagion and prevent the collapse of the health system. “We decided to postpone the plan. I started making cupcakes to put a candle on and give Rocío a surprise on Skype. Suddenly we told him that he had to connect to tell him what they had said on the news, “explains García. With guitar and ukulele in hand, seven friends were waiting for him in a group video call to sing his happy birthday.

Home confinement declared by the health crisis has transferred social and work life to the digital sphere. Skype is one of the reference video calling services. Allow up to 10 people to speak at a time in the free version. But there are also many other alternatives. Just take a look on Instagram to see stories of users chatting with friends through a screen while they drink a few rods, play trivial or darts and even make a bottle at a distance. Most images are accompanied by the hashtags # quédateencasa or #yomequedoencasa.

Raquel, in addition to using Skype to talk to her friends, has done other activities through a screen: from teaching how to make square roots to her friends at the gym to having a daily coffee with her coworkers. For the latter, use Mega. This cloud storage service allows you to make free group video calls with 10 contacts at the same time – only six with the camera activated.

There are those who opt for the instant messaging service WhatsApp or Instagram, which serve to make video calls with up to four participants. Facebook Messenger, also owned by Mark Zuckerberg, goes further. With it, you can interact with up to 50 people. Of course, only six can use the camera at the same time – the rest communicate only by voice. For iOS users, FaceTime works with about 30 users at a time. Google also has its alternatives: the Duo app is designed for up to eight people at the same time, while the Hangouts messaging service offers in its free version the possibility of having a conversation with up to ten people.

Trivial and other games

Pablo García, a 25-year-old from Avila, hastily draws on his mobile screen. First a stick figure. Then he puts it in a kind of rectangle held by ropes. And finally, together with his creation, he painted up and down arrows. Two friends follow from their smartphones in their houses the whole process. And they try to guess what it is about. After a few failed attempts, Maria hits the mark. “It’s an elevator!” He exclaims. They are playing Houseparty, an English application from the video game and software company Epic Games.

Like them, thousands of users have used it in recent days. In fact, HouseParty has become the most downloaded application from both the Play Store and the Apple store. Your secret? Video calls of up to eight people and group games. Users can guess what a player draws in Pictionary, compete by answering Trivial questions, or play who’s who. In this last game, a user has a card on his forehead and must guess what he is putting following the tracks of his companions.

For darts fans, there are options that allow you to compete with other users thanks to video calls. “All you need is your target, darts and a webcam with a microphone. The WDA will provide the rest. Playing a real game of darts against anyone in the world has never been easier and more accessible than it is now ”, explained on the website of one of these platforms. There are those who choose to make video calls for some services already mentioned while playing bingo or Parcheesi on-line with the games they have at home or using other platforms.

After the closing of classrooms due to the coronavirus, there are teachers who have chosen to give their classes via on-line. The University of Salamanca (USAL) has reinforced some tools to make it possible. Some teachers use a platform called Blackboard Collaborate that allows scheduling sessions. “The students can see and hear me. I have the option to share my screen in case I want to show them a document or a presentation, and there is also the blackboard function where they see what I write, ”says a USAL professor. Students can write questions in the chat and have a tool called “raise your hand”: “When they use it, I can choose whether I want to answer the question at that moment or if I want to lower it and postpone it.”

There are also universities that have started using Hangouts, from Google, so that students can follow the classes that their teachers teach from their homes. Another useful group video conferencing platform for this kind of virtual classroom is Webex. In this case, all the work is done in spaces where both teachers and students can send messages, make calls, have video meetings, use whiteboards and share files.

The cancellation of classes has not only affected schools, institutes and universities. Elisa Sánchez, 15, learns transverse flute at the Ávila Conservatory. Her band teacher has chosen to teach through Teams at Microsoft. This week they had the first one. To do this, the teacher divided the nearly 50 students into instrument groups. In the case of the transverse flutes there were 19. “In my group I could only see four people on video but I also listened to the rest. At first we tested if we could play all at once, but some people were late, it was a disaster and we decided that it was not the best option, “explains the teenager. The teacher then decided to ask them to write down directions such as “make the notes shorter and the end stronger.” Later, he asked someone to do the test for the rest of his classmates and if it sounded good, everyone took note. The duties are not the usual ones either: “We have to record ourselves on video and send it to the teacher to see how we have made the notes and how it is going”.

As for the telework applications that allow video calls, Zoom is the best known. This is what Nacho Rodríguez, one of the executive members of the World Telework Association (RWA), tells it. The application, which is among the most downloaded in the Play Store, is a good option for large corporations. “It is for companies with more than 50 or 100 employees. Sometimes there are meetings of more than 50 people that can be inefficient because you can only speak one by one. But with tools like this one person can make an introduction and then separate those 50 people into subgroups of five. And there may even be a facilitator who jumps from one group to another, ”says Rodríguez, who is also the founder of the conference on telework Nomad City Gran Canaria.

For small and medium-sized businesses and the self-employed, the expert recommends Whereby. This platform for video calls “is designed for meetings of 10 people or less and is more limited.” Still, it is “one of the best options in terms of quality price”. Both Whereby and Zoom have a free option and have different packages from $ 10 (9.3 euros) per month.

Rodríguez uses both platforms in his work. He usually has two meetings a day and explains that he always tries not to last more than an hour. He affirms that, contrary to what may seem at first sight, with telework meetings are reduced because “they are no longer so necessary”. “Communication goes from being synchronous to being asynchronous. Meetings are one of the great time thieves of regular organizations. In the end, if you occupy 10 people for 30 minutes, a total of 300 minutes between all of them ”, he concludes.

Share
Facebook
Twitter
Pinterest
WhatsApp
Previous articleA jacket for the hearing impaired to feel the music
Next articlethese savers trapped by the call to bet on stocks
Save 60.0% on select products from SAMMIX with promo code 6018YMV7, through 4/25 while supplies last.